INVASION OF THE SEAT HOGS

Posted on February 28, 2016 by xaviertrevino

I have to thank my good friend Maureen Rice for the inspiration for today’s blog. She posted a picture of a guy doing some serious man-spreading on what looked like the F train, and it thought, “hey, I’ve got some seat hog pictures myself! And it’s one of my pet peeves!” So here we are.

I was on the M-5 bus last week on my way home, and there were THREE, that’s right THREE seat hogs within spitting distance of each other.
There was this guy: 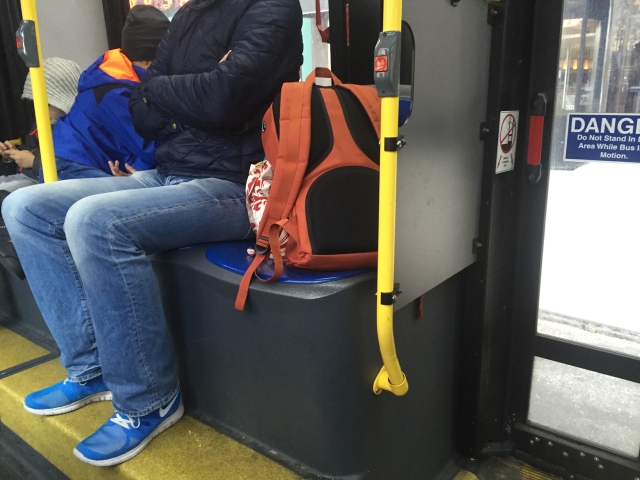 There was a gentleman right in front of her who needed a seat for his cane. They both sat on the aisle and made sure no one could get at that window seat. I debated asking one of them to scoot over so I could sit but instead played the martyr and stood and stewed.
A word about that- even though none of these people, all well to-do white Upper-West Siders would pull out a utility knife and slash me for saying something you never know with all of the crazy people who ride the subway. A man was slashed on the subway the other day just because he bumped into someone.
How can you avoid bumping into people on the subway?
It is a little scary. 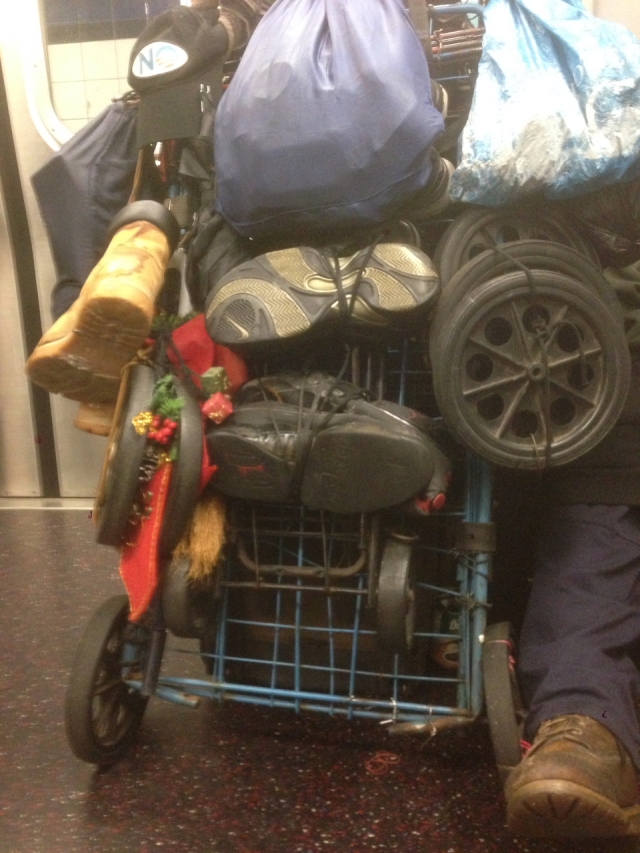 Even if you could, would you sit next to this guy?

I was on the train this morning, a D train and at 59th Street some guy ranting about God and Jesus and hell got on. I considered putting in my earbuds, something I usually do when someone’s headphones (sometimes no headphones) are too loud, but I knew this would probably provoke the guy into more fire-and brimstone self-serving shouting. At the next stop there was another train going in the same direction and I ran across the platform silently praying, “Close the doors, close the doors,” as I watched the holy roller hollerer contemplating following me onto the E train. He chose to spew more dogma on the D train, just throwing out a few dire warnings about hell and damnation to people walking by on the platform. I’d love to tell those guys (or women) to shut the HELL up.
I’d like to ask some of the seat hogs clever things like,
“Is your bag comfortable?”
Or for the man-spreader,
“Are your balls swollen? Did you get kicked or something?”
One of my co-workers who was going on vacation mentioned at lunch the other day how he’d brought his big backpack and tent to work on the crowded subway that morning, he was leaving straight from work, and he said,
“I was ‘THAT GUY’ today.” Too bad more are not aware of their self-absorbed behavior.
Well, at least I am. If I carry a backpack I take it off and put it on the floor. I never, ever put a bag on the seat next to me, and I never eat on the subway. Hey, but eating on the subway can be the theme of another blog post, no? I’ve got to get some pictures. That shouldn’t be too hard.

3 Responses to INVASION OF THE SEAT HOGS