Posted on February 22, 2016 by xaviertrevino

A couple of weeks ago at work the boss handed me a menu and said, “The lunch girl isn’t here today, would you mind ordering?”

So like that I became the lunch girl for the day. It seemed simple, I’d seen her do it day in and day out, I know that we pass a menu around and each employee lists what they want from the designated menu, then there is a little space on the ordering page to order from Terri Vegan on 23rd street. We get most of our drinks and the occasional soup from Terri. I thought it would be a cinch. 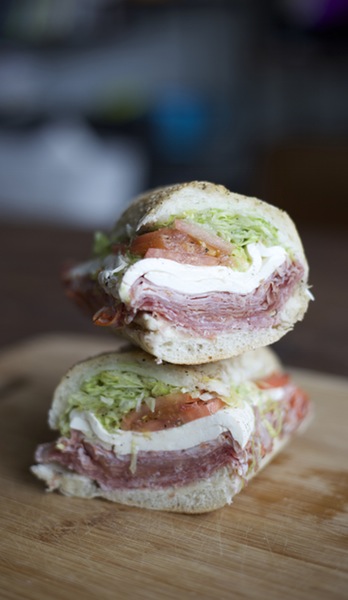 The menu was from a place called Num Pang, just around the corner from us on Broadway. The boss told me to order on the phone and then go pick it up because it’s faster. He doesn’t like to wait for his lunch, we’ve had lost orders and late deliveries in the past.
Num Pang specializes in Vietnamese sandwiches, and just about everybody ordered pulled pork on gluten-free quinoa bread; there was one five-spiced glazed pork belly sandwich. I ordered the grilled steak salad.
Before calling Num Pang, I called Terri, and as I looked at what everyone had ordered I had to make some clarifications. Some one had put down “T.B. with R.P.”
I tracked him down and said, “What’s TB and RP?”
“Oh, you’re not down with the shop jargon, are you? I want a Terri Berri smoothie with rice protein.” Ah, TB with rp, I see.

So I called Terri, gave them our number and said no, this isn’t the girl, she’s out today and I’m doing the ordering. I always get a green juice from Terri and I asked for three green juices. Only one was for me, mind you.
“What kinda green juice would you like?” The girl on the phone said. That threw me a little.
“A green green juice, I said.”
“We got two kinds, which one you want?”
“What are the two kinds,” I asked, trying to imagine how many greens there can be in the world.
“We got Live Long and Green and we got…” I knew that one, that’s what it said on every green juice I’d ever gotten from Terri. I thought it was cute, a takeoff on Mr. Spock from Star Trek.
“Yeah, that’s the one, Live Long and Green, three of them.” I saw someone had put a couple of soups under the Terri headline and ordered those as well, along with the T.B with R.P. smoothie.

Then I called Num Pang.

“Hi, I’d like to place an order and come pick it up please.”

“You have to order from Seamless or Grub Hub.”
“Why can’t I order from you?”
“Sir, you have to order on line.” I didn’t know what to do; I’ve never ordered food on line before, so I hung up. I had an Idea. I re-dialed.
“Listen, I’m picking it up, why can’t I order from you and just come over and get it?”
Sir, we don’t take phone orders. You have to order from Seamless or Grub Hub. Then you can pick it up.”
“OK, what if I came down there and ordered at the counter and waited for it, can I do that?” I was beginning to think I was in the scene from Five Easy Pieces, where Jack Nicholson can’t get two pieces of toast unless he orders a whole chicken sandwich.
“Yeah, you could do that. Sir.” I hung up the phone and got ready to go. I told one of the guys and he said,
“I’ll show you how to order online.” We went to the young lady’s computer and with a click of the mouse, seamless came up. Our account is bookmarked. I should have known that, but being unfamiliar with Windows, I couldn’t figure out how to find the bookmarks.
We found Num Pang and the rest was easy, except I forgot to order the boss’s salad.
As it turned out, we ended up a salad short and a pulled pork sandwich extra. There was also a drink I hadn’t asked for. I went back to get the salad, they said to keep the drink and extra sandwich. Sorry about that.

I forgot to order dessert.
I had to do the whole thing all over again the following Friday, this time we got Sushi and I was able to order direct from the Sushi place, and the only mistake I made was to get chicken in the boss’s fried rice.
I forgot the desert again, and the boss likes his dessert. I’m going to have to ask the lunch girl where she orders the dessert from, get it right the next time. Because I know there will always be a next time.

I like to write, take things apart and put them back together. Also our cat Snookie, turtles, and my lovely wife Danusia.
View all posts by xaviertrevino →
This entry was posted in Humor, Uncategorized and tagged anxiety, city life, food, Grub hub, ordering lunch, relationships, Seamless.com, work. Bookmark the permalink.