WAITING FOR THE BUS TRAIN

Posted on February 7, 2016 by xaviertrevino 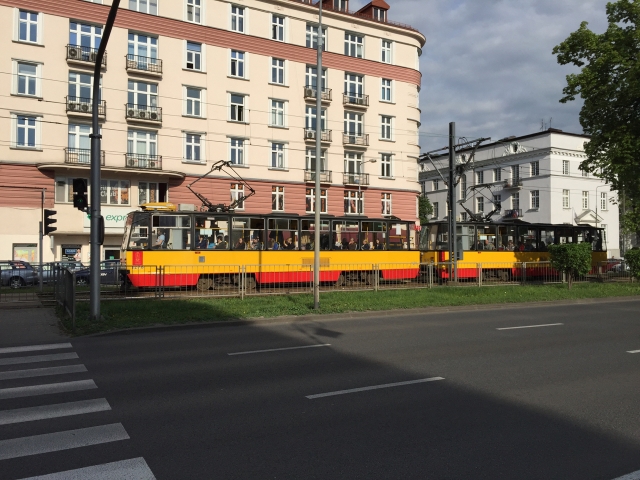 Every afternoon (or is it early evening?) around 5:20 pm there are three uptown M-3 buses traveling together up St. Nicholas Avenue near 147th Street. I have noticed this phenomenon almost every weekday that I look at my BUSES app downstairs at the 145th Street A, C, D, B train station, to decide whether I should get off on 145th or wait for the C to go the extra stop to 155th, which puts me two blocks closer to home. (I’m usually on a D or B train)

I often miss all three of them, because they travel so close together one or the other keep going because the passengers all get on the first one that stops, and they sort of leap-frog each other. Too bad they aren’t staggered to arrive one every five or so minutes instead of all three at once. I like to call it the bus train.
It doesn’t just happen here, one block over on Amsterdam you can count on two M-100s followed by an M-101 to come in quick succession, miss those and you’ll be there another 20 minutes for the next three buses.
The BUSES app I have on my phone is tapped into the MTA GPS system, so you can get a real-time estimate of how long you have to wait for the next bus. The MTA themselves have an app, not as good, where you text the bus stop code, which is displayed on the little schedule/map/stop identifier at each stop, and you get a text back telling you how long till the next bus. Pretty cumbersome, considering that third party app I mentioned.

The best thing about the app is that if I know the next bus is a half hour away I can just walk home; it’s a ten-minute walk. If it wasn’t uphill I wouldn’t care so much, but seven long blocks uphill is no fun at all, especially when you are carrying groceries. The food store situation up here in Hamilton Heights is deplorable. It’s more expensive to shop at the local Key Food or C-Town than it is to shop at Whole Foods, believe it or not. So I wait for the bus if possible.
Mayor Bill had a wonderful idea this week, to build a tram along the Brooklyn waterfront to connect Brooklyn and Queens. It would be even better to build more tram lines, but one is a good start.
When I was a child, I remember seeing half buried train tracks in the streets in downtown Brooklyn, where I first lived when coming to this country. I was fascinated, there were tracks but no trains.
“What are the tracks for, Mama?” I would ask my mother.
“Well, they were for the trams, but there are no more trams here. We have trams in Mexico.”
Yes, there used to be tram lines all over the city. And people would dodge the tramcars, which is how the Brooklyn Dodgers got their name.
There are trams in Poland, as I discovered last spring. They were fast, clean, and easy to navigate. Guess who’s backward now…

When I lived in Williamsburg I had occasion to take the B-39 bus across the bridge, and sometimes connecting to the B-46 that would take me up Broadway to my home near Graham Ave. The stop fro both of those buses are at the Bridge Plaza, a mini bus depot. There is a dispatcher’s shack, a bathroom, and I guess a lounge/locker room for drivers there. I would often eavesdrop on the bus driver’s conversations, most of which consisted of complaints against dispatchers and supervisors.
I heard one memorable conversation that went like this once:
“I like to wait for a few lights over by Ralph Avenue.”
“Oh, man, you shouldn’t do that!”
“Why not?”
“The GPS, they got you on the GPS, man. You gonna get your ass suspended!”
“They don’t know, maybe a truck was stuck in front of me or something.”
Or maybe he was waiting for a couple of more buses so they could leapfrog down Broadway. It must be fun.

I like to write, take things apart and put them back together. Also our cat Snookie, turtles, and my lovely wife Danusia.
View all posts by xaviertrevino →
This entry was posted in Humor, Uncategorized and tagged Bill Deblasio, Brooklyn Dodgers, city living, city streets, frustration, MTA, New York buses, Trams, transportation, Trolleys. Bookmark the permalink.