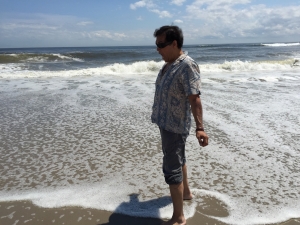 We spent the last week of June and the first 12 days of this month in Rockaway Park. Or the stop that says Playland, I don’t know why it’s called Playland since the only Playland I could find was a bar on Rockaway Freeway. Maybe there used to be a park there a long time ago.
We stayed in my friend Ezra’s cottage on Beach 98th street caring for his and Jenny’s three cats. We brought our cat Kiwi along for the ride.
Danusia was all excited about our stay, being a big beach lover. I’m not so fond of the beach, so my enthusiasm was more reserved. But it was nice to get out of the city for a bit.
It would have been nicer if I didn’t have to work for about half the time we were there, I rode the A train and shuttle a lot. I did get lucky one day and boarded a Rockaway Park bound train at Fulton Street and did not have to change for a shuttle at Broad Channel, an endeavor that can add up to 45 minutes to your ride depending on too many variables to get into here. On average I spent 3 hours a day on the trains. We did go to the beach a few times, we even walked down the block to the beach at the end of 98th Street at night to sit in the empty lifeguard’s chair. We stayed and watched kids making out on the sand and one guy with a metal detector looking for his fortune until I got bitten by one too many mosquitos.
Ezra arranged for the local Pedi-cab and bike guy to loan us two beach bikes, you know, those single speed trucks with balloon tires, and one day we set out for Ft. Tilden, just on the other side of Riis park. It’s only 4 miles from the cottage, but still a rough ride on one of those bikes. I’ve done more bike riding this summer than I’ve done in the past 10 years.
We got to Ft. Tilden after riding the length of Riis Park, and then rode through Ft. Tilden on a gravel track that took us past the abandoned gun casements built during WWII. 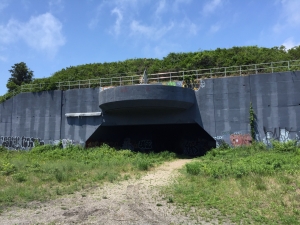 There used to be a 16-inch naval gun in there.

We came out on a beach hidden by sand dunes, there’s some kind of fisherman’s club there. We saw a Russian fellow catch a fish. 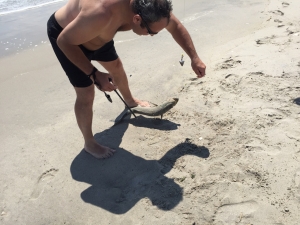 I realized I’d been on that very beach before, back in the early 1980’s. I was dating a woman who owned a Toyota pickup truck and didn’t work and we would drive out there in the middle of the week and trudge through the sand dunes till we could see the water. We would have sex and then lunch in the sand dunes. She just wanted a tan; she wasn’t much for the water either; so the dunes sufficed.
We only tested the water that first day, Danusia and I. We hadn’t come prepared to swim.
We went back again later on in the week, and this time we went to the Ft. Tilden beach front, not as far as the Fishing Club. Aside from a woman who had a camera with a huge lens mounted on a tripod there was no one else there. That means no life guards either.
Danusia was a little timid about swimming, what with the lack of a lifeguard and talk of rip currents and sharks she stayed close to the shore. We went in neck deep and hopped in the waves. It was fun and I only got knocked down once by a particularly huge wave. By the time we left the beach there were about ten other people on the beach. The woman with the camera had gone. 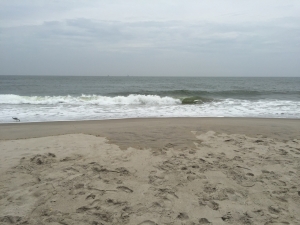 We went back again, this time on a Sunday, and I couldn’t believe how many people were there already. And they kept on coming.
This time there were Park Rangers on hand, to keep people off the protected area where the Piping Plovers are nesting. We got there in time to see there was one guy in the closed off area, he’d slipped through the fence which is festooned with “KEEP OUT” signs. A park ranger also saw him, and ran over to give him hell.
“Hey you! Get out there! As a matter of fact, get the hell off the beach. Leave now.” The guy sheepishly walked over to the ranger and apologized, all while the ranger guy harangued him.
“That’s a restricted area, don’t you see the signs?” I don’t know what else was said, I’d lost interest already, but I did notice the guy went back to his friends and did not leave the beach. 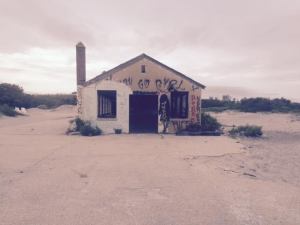 Empty building on the beach

About half of the women on the beach were topless, I saw. So did the bearded Park Ranger in the Smokey the Bear hat that’d yelled at the intruder before. He paraded up and down the beach to make sure no one else wandered into Piping Plover territory, all the wile darting his eyes back and forth from one set of naked breasts to another.
It was a hot day, and we’d brought food and a water bottle that I had put in the freezer very early in the morning. We found a spot as far from the crowd as possible, but as the day wore on more and more young hipster kids showed up. They all seemed to know each other and were bent on partying. There was plenty of booze and grass.
This is nothing new on the Rockaway peninsula; when I was a their age I was one of the kids from the city who came out to Riis Park with my girlfriend and assorted cronies (and their girlfriends).
In the mid to late ‘70s Riis Park was known as a nude beach, or at least one part of it. I imagine the part furthest from the bathhouse buildings. We would all strip and sunbathe nude and swim nude, nobody ever said boo. So we were one up on these kids.
Sometime that day we spotted a pod of dolphins about 200 yards off shore. At first I thought it was a shark, but there were at least 4 sets of fins doing the characteristic formation swimming dolphins do, rhythmically breaking the surface every 20 feet or so. We watched them swim to the east, towards Riis Park. They came back west about 20 minutes later, and it was a real treat to see them.
Danusia had even pointed and said “Dolphins,” aloud to our neighbors, but they were all too busy drinking, smoking, and admiring themselves to pay any attention to her or the dolphins. I wonder how many things I missed out on when I was that age.

I like to write, take things apart and put them back together. Also our cat Snookie, turtles, and my lovely wife Danusia.
View all posts by xaviertrevino →
This entry was posted in Uncategorized and tagged dolphins, Ft. Tilden Beach, hipsters, humor, nude beach, Riis Park, Rockaway beach, topless beach, Williamsburg crowd. Bookmark the permalink.