We have a new addition to our family of glass-plastic-steel electric kitchen gadgets. The OMEGA:

I think I bought a juice once, at Jamba juice years ago because a woman I was dating was having one and I wanted to, well, ingratiate myself. I thought I could learn something about healthy eating as well, but neither the juice nor the relationship worked out.
The taste of fresh squeezed kale, carrots, and celery and god knows what else doesn’t quite appeal to my palate.
I have a friend who once invited me (and a bunch of others) to her birthday at a popular restaurant on St. Marks Place, and when time came to order food she announced she was on a 7-day juice cleanse and took out a plastic water bottle filled with some bright green concoction that she sipped slowly as everyone else ordered burgers and whatnot. She graciously provided her own “raw” birthday cake for us to share (she didn’t have any of that either). That was an event to remember forever.
When I first started dating Danusia, she pulled out her old Breville juicer one morning and started feeding it copious amounts of carrots, kale, limes, (peeled, of course) and I can’t remember what else and poured the whole resulting juice into a tall 16-ounce glass. It was a very pretty bright green, almost neon in color. She took a sip and offered me some. I took the proffered glass and took the tiniest sip I could without being impolite. I restrained myself from grimacing, but I’m quite sure my brow furrowed and my eyes welled up.
“Well, what do you think?” She asked.
“Umm, yummy,” I said as I handed her back the glass.
“Have some more,” she said.
“No, no, dear, I know how much you love your juice, you go ahead and enjoy it. I’m fine. She burst out laughing at my reaction, and that was the last time she offered me juice.
Danusia will get on a juice kick, having a juice once and even twice a day for a few days, and then the juicer will remain in the cupboard for a while until the next juice frenzy. I won’t say what prompts these frenzies, but I will say it’s usually after the holidays.
Early on in our relationship, shortly after we moved in together at the Williamsburg loft Danusia spent some time on her computer researching “the best” juicer on the market. All the websites agreed that the top of the line Breville was best. At $300 plus apiece it should be the best. She ordered a new one. This was because her old Breville, not the most expensive one (they have three grades) wasn’t “juicing” as well as it did when new.
Now these things are big, and heavy for a kitchen appliance, ten pounds of motor and gears plus the big carafe, of course. Then there is the receptacle for catching the waste pulp, and the big cup for the juice. A countertop monster if there ever was one. Not to mention noisy. 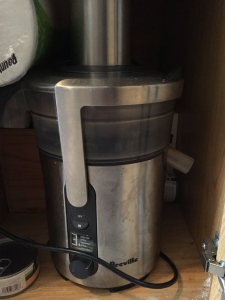 It sounds like a cheap vacuum cleaner ingesting a cat. I remember a few mornings where the morning news was drowned out by the shrieks of carrots and kale stalks being ripped to shreds by the tiny little teeth on the grinding basket. It’s a round basket with teeth like a cheese grater that spins with alarming speed. Imagine a deranged dentist going to work on your gums instead of your teeth with his high-speed drill.
One day Danusia came home with a bullet. A Magic Bullet, to be exact.
This is the Magic Bullet:

Not a juicer, more of a musher, the bullet makes creamy concoctions of frozen fruit and soy milk and whatever else you want to throw in there. I toyed with making my own peanut butter in it but balked at the cleaning job that would follow.
I have to admit I did try the fruit concoctions; they were a lot tastier than the juices. Of course probably not as healthy, but less calories than a pint of ice cream.
Using the Breville requires a lot of time and work, it has to be cleaned with a special brush, there’s a lot of pulp to be rid of, it’s big and heavy. Danusia’s search for a better way went on. Then she discovered the OMEGA.

Unlike the Breville, the OMEGA works slowly, grinding down the veggies with a big hard plastic wheel that resembles a giant screw. It’s quiet, making a gentle whir as it destroys green stuffs. It’s also easier to clean and has a smaller profile than the monster Breville, which resides in a kitchen cupboard, having lost its place on top of the fridge. That space is dedicated to the new kid on the block, the OMEGA.

I like it better already. But I don’t think I’m going to drink the juice.

I like to write, take things apart and put them back together. Also our cat Snookie, turtles, and my lovely wife Danusia.
View all posts by xaviertrevino →
This entry was posted in Uncategorized and tagged Breville juicer, fads, food, health food, humor, juice cleanse, juicers, magic bullet, omega juicer, relationships, smoothies. Bookmark the permalink.