If you are a regular reader of this blog you know I have BPH, or benign prostatic hyperplasia. That means that for me, the location of the exits in a theater is not as important as the location of the restrooms. In case of an evacuation emergency, I would have to hit the john first. Who knows how long I’ll be standing on the sidewalk?
I was in midtown the other day, I had to meet a friend for lunch in Columbus Circle but I also needed a new watchband. The watchband I wanted (a nice black silicone one) was available at a Fossil Store on 48th and Broadway, a short walk to Columbus Circle. I went there first.
As I walked through the throngs of tourists and Elmos and Cinderellas and the Naked Cowboy (holding some middle aged Midwestern woman aloft) I suddenly got the urge to pee. That’s nothing new; I usually get the urge about five minutes after I go. It just keeps getting more and more urgent as time drags on, until it becomes unbearable. Two plus hours is unbearable territory.

Like a good scout, I looked around for the possibility of a bathroom nearby. On 45th Street and Broadway, there is none.
Of course all the restaurants in the area have restrooms, they also have little signs that say: RESTROOMS ARE FOR CUSTOMERS ONLY! With an exclamation point, no less.
I looked at all of the tourists, the throngs of people that stare up at the giant electronic billboards and wait at the corner for the light to change, and wondered where they go, or what they thought about the fact that there are very few public restrooms in New York City. 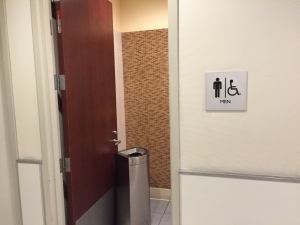 That’s what I love about Europe, they know people need to go and have public restrooms everywhere. It’s an actual business and job for some people.
On my recent trip to Poland I had to go at a train station outside of Lødz and Danusia directed me to the “W.C.” W.C. means “water closet,” a polite and universal term in Europe. It’s called W.C. in every country in Europe.
“You have to pay. 2 zloty.” A zloty is about a quarter, and I’d gladly pay fifty cents for a clean bathroom any day of the week. In the U.K. the W.C.s were 50 pence, a little more but still manageable. And if you are really broke you can crawl in under the turnstile.
I walked into the room, and there was a little window with a big fat woman with bright red hair sitting on a stool behind it. I looked around for where to put my 2 zloty, and seeing none, I started to push open the door to the men’s. The woman yelled something at me in Polish.
I went to the window with the coins in my open palm. She said something I couldn’t understand in a stern tone of voice and pointed. Ah, that’s where the money goes, I thought as I spotted the proper receptacle, a little box by the door. Low tech indeed. I paid and entered the men’s room proper. A row of closed stall doors met my gaze. Closed all the way to the floor. No wayward U.S. congressmen to play footsie with here!
Years ago, on my trip to Germany courtesy of the U.S. Army we were let loose in Hannover, a large city in northern Germany. I went to the train station thinking I could score drugs there, and I just might have had I known how to speak German. But the best I could do was to take a pee in the large men’s room there. It reminded me of the restroom at Grand Central Station.
I took a place at a urinal, and I noticed the man next to me was a well-dressed older gentleman, with a suit, tie, and trilby hat. He smiled. I smiled back. He looked down, and I followed his gaze. He had a huge erection and was stroking himself. I broke his gaze and finished what I had to do and left as quickly as I could.
The bathroom in Washington Square Park can be like that, so I don’t go in. Hard to pee when you know there are five or six men standing behind you watching.
By now I know where to find restrooms in New York. All the big stores have them, Macy’s Bloomingdale’s, and whatever the store that took over Filene’s basement in Union Square is good. I was disappointed with Bloomingdale’s in Soho; one of their stalls had a leaky flushometer for months. It actually had a rag tied around it. Come on, Bloomingdale’s, you can afford to hire a plumber. I resisted an urge to bring a Channel Lock with me to tighten it up myself. 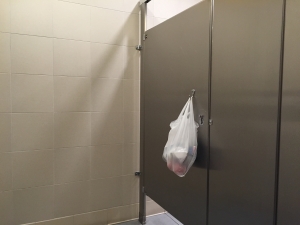 The best bathroom I use is the one on the second floor of the Time Warner Center at Columbus Circle. This is where I ended up at the other day, after I got my new silicone watchband from Fossil. It’s clean, it’s beautiful, and it’s relatively private and comfortable. I wish there were one like this on every other block in New York City.

I like to write, take things apart and put them back together. Also our cat Snookie, turtles, and my lovely wife Danusia.
View all posts by xaviertrevino →
This entry was posted in Uncategorized and tagged anxiety, BPH, city life, Europe, humor, need, New york, Poland, public restrooms, United Kingdon, W.C.. Bookmark the permalink.