Posted on February 17, 2015 by xaviertrevino 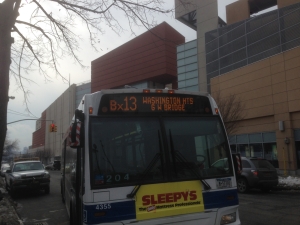 I ride the Bx 6 bus a lot, being a freelance handyman. I go to the Home Depot at the Bronx Terminal market, just across the Harlem River. I get on the Bx 6 on Amsterdam and 155th Street; take the 6-minute ride to River Avenue and 161st Street, just across the street from Yankee Stadium, where I either catch the Bx 13 bus to the market 11 blocks down River Avenue or walk. Most times I opt to wait for the bus.

After a few of these rides, I noticed everyone on the bus was a person of color; I have yet to see a white person either on the Bx 6 or the Bx 13.

The woman at the front of the bus in this photo is Asian, and she counts in my book as a shade of brown thanks to Colonel “Shorty” Tall, a character in James Jones’ The Thin Red Line who referred to the Japanese soldiers as “our little brown brothers.”

Asians used to be referred to as “yellow” people, but the only yellow people I’ve ever met were people with a serious case of hepatitis. Most Asians range from the pale pink of white people to mahogany, which was my dad’s color.
I’m a little lighter, because my mom was pretty white, being descended from Spanish, Mexican, and some kind of white European blood from her grandfather; who was part of the French Foreign legion force abandoned in Mexico after the Emperor Maximillian (an Austrian) was overthrown. I guess I am what they call “olive complexioned.”

Most of the people on these buses are either African-American or Dominican.

I used to work for a guy who was a self-described “White Dominican.” He was a shade lighter than me, with the same curly black hair. His wife was NOT a “white Dominican,” being a shade or two darker than me. She also has coarser hair than the average white person, but not the tight thick curls of the African. I noticed most Dominican women of this complexion have the same hair. I also remember she was always accusing him of being racist. 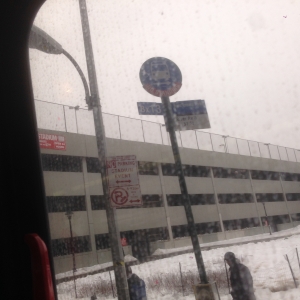 Years ago I worked with Chinese people in Chinatown, (where else!) and I worked with a guy named Luis, who was from Hong Kong. To me he looked like an average Chinese person from Hong Kong, a shade or two lighter than me, but slightly different from most whites. One day we had a discussion involving Koreans.
“Well aren’t they the same as you, Asian?” I asked. Luis grew indignant; he couldn’t believe I couldn’t see the obvious.
“Koreans are dogs!” He exclaimed. Touching his hair he explained to me,
“See my hair? Like silk! Korean hair not like silk. Too rough.”
And I thought I had it bad as a Latino in a white world.
Recently I made an observation to my wife about Korea; we were discussing economics and the better quality of Korean goods vis-à-vis Chinese and Japanese goods.
“The Koreans try harder. I said.” When she asked why, I said:
“Well, think of Korea as the Poland of the east. Sandwiched between China and Japan, and lorded over by one or the other for centuries, it does something to the national self-esteem. It’s like Poland caught between Germany and Russia, Poland has to work harder to shine.” She never saw it that way, but understood.
Getting back to the Bx 6 and Bx 13, where everyone is either African American, Dominican, Mexican, Asian, Arab, Puerto Rican, Ecuadorian, or African from Africa, believe me, we are fifty shades of brown. 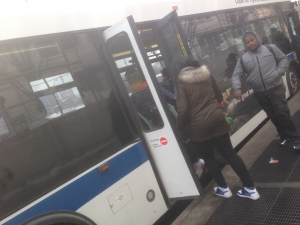 How do you board a bus in the Bronx? Through the back door, of course!

When I was a kid growing up in Bedford Stuyvesant Brooklyn, I went to a P.S. and a junior High that were both almost 90% African American. I remember the black kids, who mostly had roots in the south, referred to the lighter-skinned black kids as “high yellow.” They didn’t look yellow to me, no more yellow than Asians, who like I said were referred to as yellow people then, but that’s what they were called.
So if you were “high yellow,” or “black as night,” you were out of luck as far as the average African American population went. It was better to be somewhere in between, like a mocha or dark caramel.

I found my father’s old Mexican passport a couple of years ago, and on it he is described as “Moreno.” Morro is brown in Spanish, and whence the word Morros comes from in Spanish. It was used to describe the Moorish invaders in the 8th century. Morros were simply, the brown ones.
So the word Moreno simply means “brownish one.” 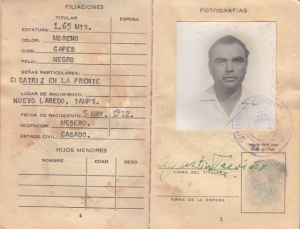 Much has been discussed about race in this country in recent months, due to the police killings involving people of color. But we have to remember that this is nothing new, and that cops kill white people too. It’s what happens when you get into an altercation with the police, you could end up beat up at best, and dead at worst. Best to stay out of their way. Like Bob Dylan said, “The cops don’t need you, and man, they expect the same.”

Enough about that, there is no end to the debate about race, and I don’t mean this to be that, a debate. I wanted to talk about race, since it’s something I think about often enough, and this being the week that “Fifty Shades of Grey” is released, I’ve got an easy hook for something more important than the bullshit S&M depicted in this book/movie. If you like that sort of stuff, read Pauline Reage’s “The Story of O.” Now that’s S&M. Or read “Justine” from the master himself.
This is just a simple observation that our society is not an integrated one by a long shot, it’s just not as strict as it used to be; and despite whatever color or shade we are, we are all the same inside, people afraid of other people that look different than we do.

I like to write, take things apart and put them back together. Also our cat Snookie, turtles, and my lovely wife Danusia.
View all posts by xaviertrevino →
This entry was posted in Uncategorized and tagged acceptance, anxiety, arrogance, Bedford Stuyvesant, buses, change, fear, Fifty Shades of Grey, MTA, New york, race, the Bronx. Bookmark the permalink.