Posted on February 14, 2015 by xaviertrevino

Happy Valentine’s Day to all of my friends, and to my lovely wife, Danusia. She sent me the picture of herself at the top; it was one of the first selfies she ever took with the iPhone I gave her a little over 4 years ago.
And no, the iPhone was not a Valentine’s gift, it was just a gift.
For Valentine’s day I usually take her out to dinner. Flowers, dinner and a card; but this year I picked up a surf-and turf special at Whole Foods that I’m going to cook later and we’ll have dinner in. I did get a card and a small gift, though.
On our first Valentine’s after moving in together we went to a place called Giando’s on the water, it’s a big fancy Italian restaurant on the East River in Williamsburg.
I used to see it on my daily trips over the bridge on the M or J trains, and I always wanted to have dinner watching the river flow, and planned on it for months.
It was a surprise to Danusia, and she was further surprised when we got the menu. There was a choice between two different dinners Table d’hote, and either choice was $150 for two. Plus tip. And we were not seated anywhere near the big windows that you could see the river from. 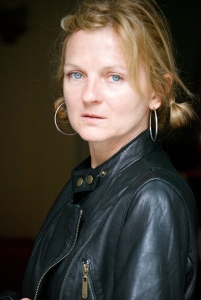 The lovely and beautiful Danusia.

She wanted to leave, but I said no, we’re here so let’s enjoy it as much as we can. After all, we were together, and that’s what counted.
We’ve had better luck since then, a French Restaurant on Metropolitan Ave, a place called The Rabbit Hole on Bedford Avenue (food’s yummy and the atmosphere quiet and laid back, you’ll love it), and others but those are the standouts.
But being self-employed and not having a lot of money this year I opted for the stay at home dinner. But I’m a wonderful cook and the extra love I’ll be putting into the meal will make it special.
It doesn’t have to be fancy and expensive to be a special evening if you’re in love.
There is no stand out Valentine’s Day in the past to write about, but I do have a couple of them I could forget.
One was about 18 years ago, I was working for ACORN in Brooklyn on Valentine’s Day and that was the day they stiffed me for a paycheck and I had to go all the way to the Bronx to get it. I don’t care that the office manager gave me some chocolates in the morning; I quit after picking up my check.

This is my favorite picture of us.

Then there was the Valentine’s Day before I met Danusia, I was seeing a woman that I was really not that into, (I know, don’t kill me for that) and at the last minute I picked up some pink bubble bath thing at Duane Reed that had hearts on it and a card.
She was incensed, saying I gave no thought to the gift and wasn’t going to be treated like that. I told her she was right and ended the relationship.
She’d given me a piece of Turquoise set in silver on a leather thong; a necklace. I know it was a lot pricier than the bubble bath, but my hippie days ended a long time ago and there was no way I was ever going to wear it, so I don’t know how much thought went into that.
Luckily I met Danusia, and all of our gifts to each other, large and small, have been perfect. But I think the only reason they are perfect is because we accept each other for the people we are, rather than for the people we want each other to be.
If you are with someone like that, you are very lucky, and if you are not, or if you are alone this Valentine’s day, don’t give up hope, just open your heart and be accepting and the right person will come to you, or you to them.

I like to write, take things apart and put them back together. Also our cat Snookie, turtles, and my lovely wife Danusia.
View all posts by xaviertrevino →
This entry was posted in Uncategorized and tagged acceptance, ACORN, dinner, flowers, gifts, Love, marriage, relationships, Valentine's day. Bookmark the permalink.