REASONS TO BE CHEERFUL

Posted on November 29, 2014 by xaviertrevino 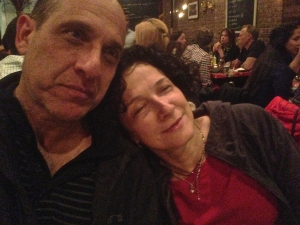 I missed posting last Tuesday because I had to work; I got a week’s worth of work at my friend Tommy’s building. I don’t particularly like the job, but since my unemployment just ran out I couldn’t really say no. The rent still needs to be paid. So I’m grateful to Tommy and his beautiful wife Sarah for thinking of me when I lost my previous job and hooking me up with this one.
On Thursday my friend Albert posted a sort of greeting card on Facebook where he said he was thankful for all the wonderful friends he has in his life and a whole bunch of names were on the card and Danusia and I were amongst the names. I like Albert too, and I’m grateful for his generosity and friendship. His list made me think of making a list, but I’d be here all day; so I’ll just say if you are my friend I’m grateful that you are and that you are in my life, and don’t be offended by not being mentioned, like my friend Ezra was last night at dinner. I know he was joking, but I have to give him special mention for his help and generosity in my time of need.
When we moved out of Williamsburg suddenly it seemed an almost overwhelming task, there was just so much to do in a limited amount of time. But thanks to friends like Ezra and Michael Dee and others too numerous to mention Danusia and I got it done.
I had dinner last night with Ezra and his girlfriend Jenny, the erstwhile Jenny Moradfar Meyer, and Joyce. Joyce was mentioned in last Saturday’s blog post and she was buying me dinner last night because I’d helped her out by taking out the trash for her elderly parents last week. She found out I’d mentioned her from another friend and wanted to read the blog post.

“If you read my blog regularly you wouldn’t have to hear it from someone else,” I said. But of course most of us are only interested when we are involved.
That’s when Ezra chimed in,
“You didn’t mention how I helped you carry all of that heavy stuff down the stairs when you moved out.” I should have said, “How do you know? Have you been reading the blog?” But he was right, I never wrote about that, mostly because I was too busy with the move.
So here it is, a belated acknowledgement of Ezra’s help when I moved out in October. He showed up one day to help me carry down an 80- pound king-sized mattress and the box springs, and two large pieces of furniture. I really appreciated the help.

Ezra was a friend, not a real close one, but became closer when he started dating my REALLY close friend Jenny M M. I’ve known Jenny for almost 15 years and we became close about 7 years ago when she separated from her husband. We became even closer when our mutual friend Maggie Estep died suddenly last February.
Five years ago Jenny and I rode to another friend’s funeral in New Jersey, our friend Andy the skateboarder. He was a closer friend to me than to Jenny, but in time of need we are all close friends.

And I have become friends with her friends; we had Thanksgiving dinner at her friend Elaine’s home the other day, with another friend, Jennifer.
Having all of these good people in my life makes me very cheerful, as well as grateful. But I thought cheerful was a better word in the title, sounds more like the old Ian Dury song, and I love song references.
There was a time when the only friends I had were those who wanted something from me, or I from them. Now my friends are friends because we genuinely like being with each other, we love each other and do anything within reason to help each other out. It’s a much better deal. And for that I am eternally cheerful. And grateful. Happy belated Thanksgiving, my friends.

I like to write, take things apart and put them back together. Also our cat Snookie, turtles, and my lovely wife Danusia.
View all posts by xaviertrevino →
This entry was posted in Uncategorized and tagged being there for others, blogging, cheerful, fear, freindship, friends, grattitude, Love, Thanksgiving, unemployment, work. Bookmark the permalink.