WHEN IN DOUBT, CLEAN THE HOUSE

Yesterday was Memorial Day and we had vague plans about going to the park for a picnic or maybe seeing a movie. Danusia wanted to go to the beach, to Coney Island, but I hate the beach, so I didn’t make any encouraging sounds. A movie would have been nice, though.

“So do you want to have a picnic dinner in the park?” I asked hopefully around noon.

“I’m not feeling the park,” she replied. I thought I felt the beach coming on, but the realization that there was no J train all weekend spoke to added travel time and packed buses carrying all our beach stuff.

“I though we might do some housecleaning instead,” was her suggestion.

We hadn’t done a real good housecleaning in a while, and since I’ve been repairing chairs we’ve bought at flea markets on Long Island and doing a bit of sanding recently, it was a good idea. I’d already cleaned the bathroom on Sunday so we were ahead of the game.

We got out the vacuum, the Swiffer, assorted dust cloths, spray cleaners, brushes and rags and set to work. I put on iTunes and as a team we started cleaning.

Aside from sanding dust and regular dust there was plenty of cat hair, my pet peeve. The kitty ran from place to place as I chased her with the vacuum cleaner and spray bottles. Not that I would ever spray Fantastik at the cat, only water when she was new and couldn’t hold her water, but she knows what a spray bottle looks like.

Look what the cat did to my tool knapsack:

I got down on my hands and knees and wiped the tops of the baseboard heating elements, I vacuumed and dusted the tangle of wires behind the DIRECTV box and TV itself, moved the couch and did behind and underneath.

The bookshelves I built into the wall were dusty; I climbed on top of the back of the couch and dusted the shelves, the books, and the remainder of the

P-51Mustang I built 17 or so years ago. I found the propeller, canopy and a set of wing slats neatly hidden behind a photo frame.

My ex-wife used to destroy whatever models she could when she was dusting. Girls just don’t appreciate miniature airplanes.

The ceiling fan was our big project, we have 12-foot ceilings and they are very hard to reach with a 6-foot ladder. I know I should have bought an 8-footer, but I thought I’d save twenty bucks.

The last time the fan was cleaned was when my son Javier was here three summers ago. He’s six-one and was able to reach the fan standing on the next to last rung on the ladder, which I held for him.

But now we were on our own. The solution was to place the ladder on top of our fabulous dinner table; a solid mahogany affair a tenant had given me. 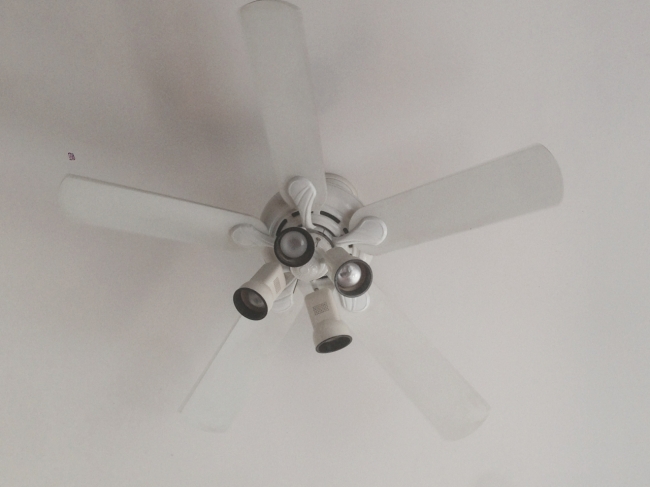 I was going to do it, but Danusia insisted on getting up there while I held the ladder steady. There was a lot of dust, much more than on the bedroom fan. Maybe it’s because of this fans proximity to the kitchen? Or the J train right outside the front window?

The cat’s corner of the living room:

The bedroom has only 9-foot ceilings, so that was an cinch for me to do.

I also got down the brass bird from the top of the mirror-mantel, I guess that’s the only way I can think of describing this thing: 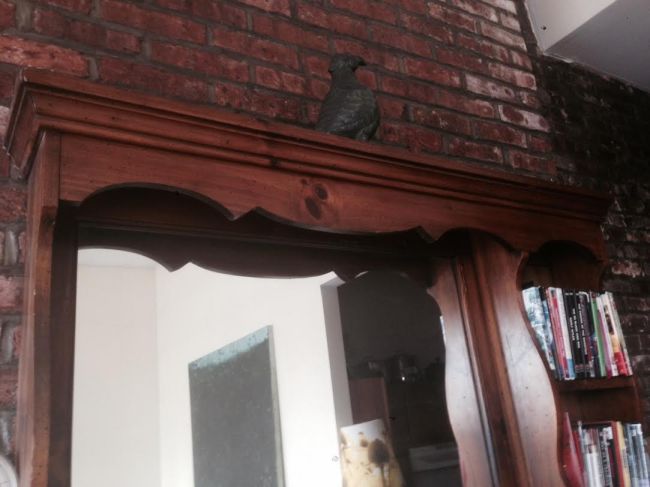 And this is the bird:

I have no idea what it’s for, but I know it’s made of solid brass and its head

Comes off. It has a sort of Aztec motif carved into the body. If any of you know what it is, please don’t hesitate to comment. Even if you don’t know what it is or what it’s for, feel free to render an opinion. I’m really curious about it.

I rescued it from the apartment of an old man that died at 144; his daughter was so devastated she refused to deal with the liquidation of the apartment. She gave us a couple of hundred dollars to get rid of everything. I got the bird and two TEAC turntables out of the deal.

Anyway, the bird was pretty dusty being up on his lonely perch.

After a few hours we were done, we made dinner and sat down to watch a French movie on Netflix, A Stranger By The Lake. It was a good murder thriller with the added kick of having VERY graphic homosexual sex scenes. Not a movie I’ll soon forget.

The best part about it was the feeling of accomplishment, when the apartment is clean we both feel that much happier, and happy people have more fun.

So, if you are feeling unhappy, or feel you’re not having enough fun; not getting the things in life you think you deserve, clean your house. I guarantee you you’ll feel much better afterwards, whether you have a dirty French movie to watch or not. And that’s a start.

I like to write, take things apart and put them back together. Also our cat Snookie, turtles, and my lovely wife Danusia.
View all posts by xaviertrevino →
This entry was posted in Uncategorized and tagged 144 West 86th Street, cat hair, cleaning ceiling fans, depression, dirty French movies, dust in the city, feeling better about yourself, humor, improve your environment, liquidating estates, relationships, Spring cleaning, vacuuming. Bookmark the permalink.

1 Response to WHEN IN DOUBT, CLEAN THE HOUSE