SPIRIT IN THE SKY

A few weeks ago, right after Maggie’s funeral and memorial in Hudson, my friend Bill asked me to write about it, but there were so many accounts in the newspapers and on line I felt that doing so would be sort of like jumping on the bandwagon. I told Bill I was going to wait and let Maggie get some rest.

Sunday I attended another memorial for Maggie, at the Shala Yoga studio on Broadway. While the memorial in Hudson was a star-studded tribute to Maggie’s musical and literary talents, the one at Shala was more of a celebration of Maggie’s spirit.

Maggie tried to present this hard-boiled chick persona, tough, wisecracking and cynical. I can identify with that, because I try to do the same thing. But I also saw the inside Maggie, the vulnerable, kind and giving Maggie. The little girl who rode horses and talked to dogs Maggie.

When I fist started dating my wife, the lovely Danusia, I remember I was waiting for her one day with some friends. We were all going out to eat. Her name came up, and I heard a woman say, “Danusia’s very spiritual.” For a second my heart skipped a beat and I thought to myself: Maybe I’m making a mistake. Which just goes to show you to what lengths I go to hide my own vulnerability.

I by no means consider myself a spiritual person, much less a religious one, but I have to say in no uncertain terms that Sunday I was there in spirit, and so was Maggie. And this from a person who went to great lengths at one time to argue theology with Jehovah’s witnesses who had the misfortune to knock at my door.

The ceremony was simple. We arrived, took off our shoes, and walked into a large but unbearably hot room, devoid of furniture save for a couple of chairs and an alter in the far side near the big windows. There was a skylight above the center of the room and a trapdoor in one corner made useless by a 400-pound radiator that had been added on top some time after the building was first built. It’s an old building.

I felt a little silly because I had on miss-matched socks. Then I saw the guy with holes in his socks, and I didn’t feel so silly. I had a chair, one of the few, but when my friend Kelly came in I gave up the chair and opted to sit on the floor next to her. I knew some of the people there, but most were strangers, part of Maggie’s yoga community. Maggie took her yoga very seriously. 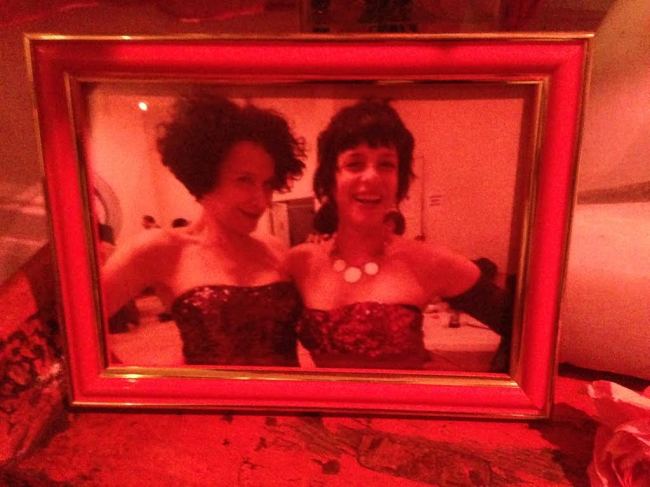 After everyone was seated and my friend Jenny Moradfar-Meyer (who was Maggie’s closest friend) brought in the Prasada (food offering to the gods) the chanting started. Women from the Ashram had handed out laminated plastic sheets with the various chants on them, but as the chanting started I couldn’t find the chants or follow from the sheets. I opted to read the singer’s lips instead, and did a fair job of chanting along. Hare Rama, Rama Rama, Hare Hare, Rama Rama. Where once I would have been mortified to say those words, I repeated them with the spirit that I was pleased to find within. No shame in expressing love, I’ve learned.

There was a woman playing the harmonium, and a young Indian man played the tamburi. It was beautiful. I sat cross-legged in the closest approximation of a lotus pose I can get to in my arthritic condition and sang and chanted along. I watched the light in the box of the skylight change from orange to blue and darken gradually, and felt the spirit of Maggie and those who loved her. I felt a part of something bigger, and I was happy for it.

Jenny passed out the Prasada after the chanting ended and then carried around the candle of Maggie’s spirit and we all wafted a bit of it over our heads. A few people said some words for Maggie and it was over.

Jenny sent me an essay Maggie had written about New York this morning, just as I started writing this. The essay is called Think Of This As A Window. Maggie wrote about being at the Mudd club and watching James Chance, and I was there a few times when he played, so perhaps our paths have crossed more than once. In the essay Maggie also mentions watching the twin towers fall from the Brooklyn Bridge.

Two weeks ago I took the train out to Far Rockaway for hopefully the last time, and I had to change trains at Rockaway Parkway. I could see the new freedom tower in the distance, and I imagine people standing where I stood watched the towers fall thirteen years ago. I took a picture.

I like to write, take things apart and put them back together. Also our cat Snookie, turtles, and my lovely wife Danusia.
View all posts by xaviertrevino →
This entry was posted in Uncategorized and tagged acceptance, friendship, hard-boiled chick, Maggie Estep, memorial, Spirit within, Think Of This As A Window essay, twin towers/freedom tower, vulnerability, yoga. Bookmark the permalink.

4 Responses to SPIRIT IN THE SKY