NO HAGGIS FOR ME, THANKS

Posted on March 8, 2014 by xaviertrevino

I’ve been thinking about what to write about today for the past couple of days. I always want to write something to think about, something that may be helpful to someone else in some way, like James Jones’ private Prewitt- a guy who felt if he was there he could “save some lives.” Not that I’m any kind of lifesaver, but some readers have told me that I’ve at least made them think about some stuff.

I could talk about still being up in the air vis-à-vis my job/work situation, but since there’s nothing new on that front that’s out. Of course I can talk about the fear of what will come and the sense of uselessness that I feel sitting around waiting for something to happen, but again that’s pretty narcissistic. A lot of other people in the world are in the same situation and they’re not writing about it. I’ll just have to wait and see.

A few of weeks ago (when I still had a job) I bought a new computer, and the iPhoto on this one works, as compared to the iPhoto on my 7 year old MacBook Pro, which quit working three years ago. I was finally able to download a bunch of pictures from our trip to the UK in 2011, when the lovely Danusia took her one woman show Wonderbread to the Fringe festival in Edinburgh.

It was my first trip to Europe since 1980, when I flew across the Atlantic in a C-141 Starlifter and jumped into a small town in Germany, called Tintrup. But that’s another story- just thought I’d mention it. 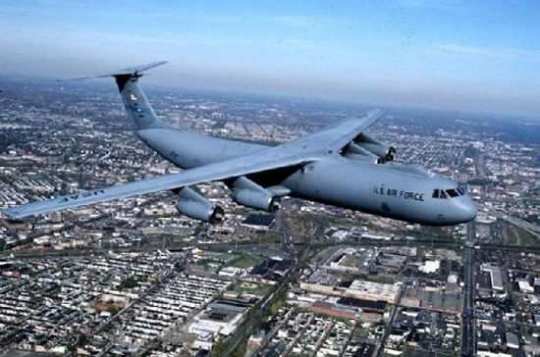 This time I didn’t jump, just flew into Dublin in the middle of the night where I had to wait for the first flight to Scotland in the morning. The Dublin airport from 3AM to 6Am is a sad empty place to be, but what can you do?

Danusia picked me up at the Edinburgh airport, a small sleepy affair that can handle the smallest of commercial jets. I was on an ancient Embraer turboprop that vibrated so badly it gave me a headache. You had to walk down the stairs onto the tarmac from the plane, which is cooler than those enclosed boarding gates.

We took a double-decker bus into the city, and the Scottish countryside was just like in the movies, green and very hilly.

The city itself was beautiful, mostly ancient streets and buildings, with lots of stairs and different leveled streets, all very vertical. 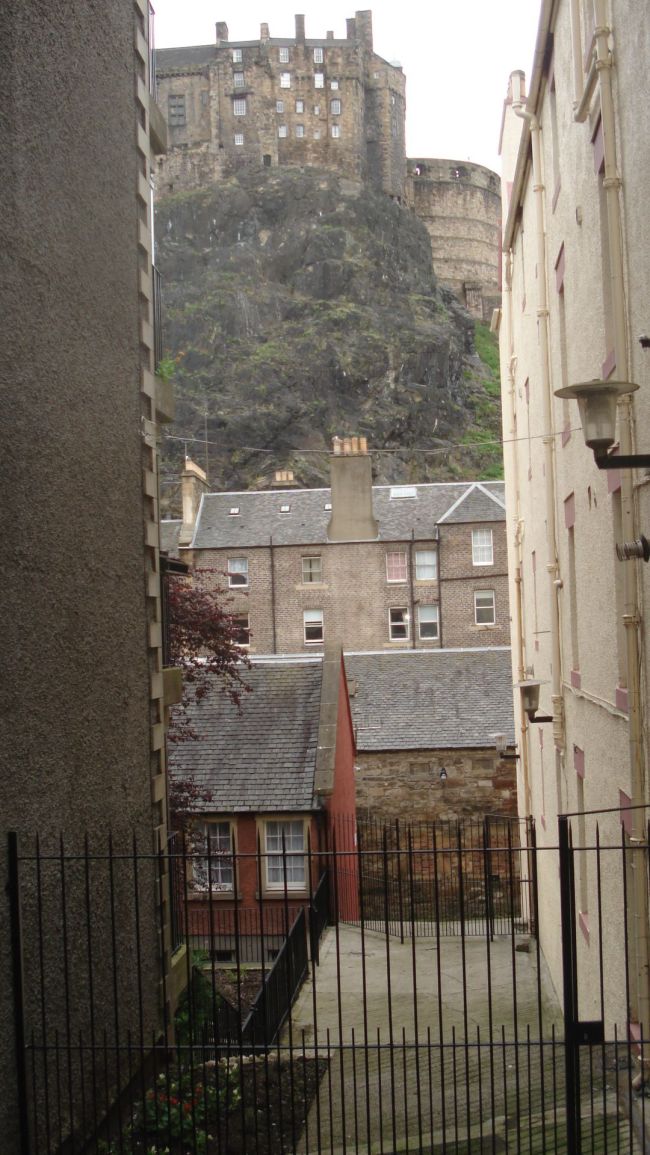 We stayed in a university of Edinburgh dorm apartment on Pleasance and St. John’s hill. We were bunking with other member’s of Danusia’s team.

My first night there I had to make my way to the theater by myself, but Danusia had left good directions and I walked the mile to Bread Street up the Cowgate road or street or whatever they call it. The theater was in the basement of the Point Hotel and it was called the Griffon theatre. There was a press party for all of the performers that were booked in the theatre and I met and chatted with various thespians from all over the UK looking for their big break at the fringe festival.

I remember looking on line to read about the festival, and I actually found a comment from a friend of mine, the Scottish novelist who lives in England Mark McNay. There was a little picture of him and his advice to Fringe performers: “Don’t quit the day job.”

That night at the party, which was on the top floor of an ultra modern building (the Point Hotel) I looked out of the big picture windows and saw an imposing medieval structure in the distance, lit up like a fairytale castle. It was the Edinburgh castle and it was almost ethereal in the light mist of the night. 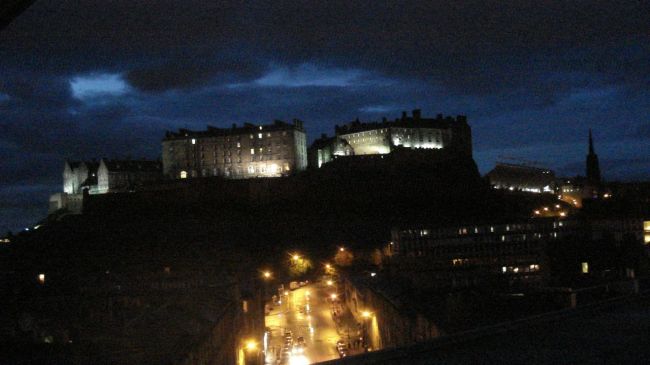 The next night was one of Danusia’s performances, and I was taking over the light board duties from Danusia’s director, Aleksey who left for the states the day I arrived. I hadn’t touched a light board since the mid 70’s so it was a little tricky. Danusia decided to cancel the performance and rehearse with me instead.

The next week was a flurry of sparsely attended but wonderful performances by Danusia, who put her heart and soul into her little show.

During the day we walked up and down the Royal Mile and downtown Edinburgh distributing flyers and inviting people to the show, along with thousands of others. It was fun walking around the ancient city, though going up and down all those stairs and many-leveled streets was tiring. 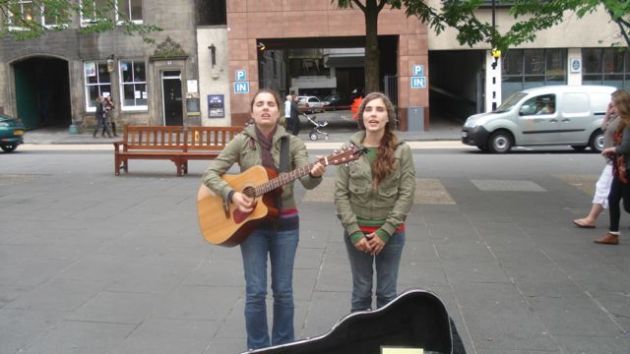 I also visited Holyrood Park, which was right behind the dorm we were staying at. The park featured a big hill, 800 feet high, and of course I had to climb to the top. At the top was a stone throne called Arthur’s seat. I didn’t get a picture of that. 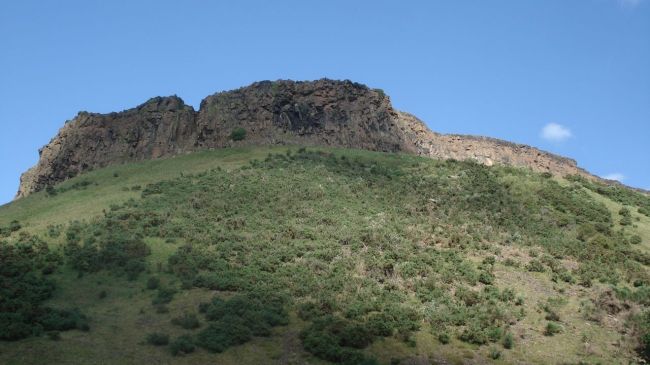 A friend of Danusia’s who was living in Amsterdam came to the show, and she was staying at the Balmoral hotel downtown. The Balmoral is a five-star hotel, the place J.K. Rowling wrote a lot of the Harry Potter stories (after she got rich.) We were lucky enough to stay there one night, the night before we left for London, carting along 400 plastic tomatoes.

The next morning we enjoyed a five-star Scottish breakfast, courtesy of Danusia’s friend Lana who had the suite booked. It was quite an experience, and thinking back on it makes me realize that life is more than a steady nine to five job with benefits; life is what I choose to make it.

I like to write, take things apart and put them back together. Also our cat Snookie, turtles, and my lovely wife Danusia.
View all posts by xaviertrevino →
This entry was posted in Uncategorized and tagged Balmoral Hotel, Danusia Trevino, Edinburgh Scotland, flying to Europe, Fringe Festival, life goes on, Mark McNay novelist, plastic tomatoes, Scotland, travel, UK, waiting, Wonderbread. Bookmark the permalink.

1 Response to NO HAGGIS FOR ME, THANKS