It’s beach season again and we’ve been to Rockaway twice in a week.
The plan Sunday was to catch the 9:30 NYC ferry from Pier 11 at the foot of Wall Street. We were supposed to leave at 8 but it was closer to 8:30 by the time we were walking to the subway. The Google map told us it would take 57 minutes on the A train. We missed the A (by seconds) but got on the next C train. Miraculously we got to Fulton Street at 9:02 AM. We hopped a cab and alighted at Pier 11 five minutes later. There was already a huge line.

These people were all behind us.

The first time we took the new Hornblower NYC ferry was last Tuesday, and we took it pretty late in the day, around 4. Still a big line but we got on the first ferry that came. We weren’t so lucky Sunday.
We were to meet friends, and they arrived a few minutes after us. We waved our friends Jennifer and L.J. to join us on the line, something people behind you in line grumble about but nobody out and out bitches you out. It’s a New York thing, save me a place in line. We had to hold our tongues when people in front of us started letting their friends in.
The catamaran ferry whooshed into slip 2 at 9:32, late. Remarkably it was almost full of people coming in from the Rockaways. A woman in front of me looked at me and said, “don’t they know they’re going the wrong way?” “Maybe they want to go to Central Park,” I replied.
Boarding started and the line inched closer to the boat. We almost made it to the shaded platform before the line was cut off. We were going to have to wait another hour.
“I know a secret,” a very young woman ahead of us breathlessly announced to her group of friends.
“On the weekends they add extra ferries, so there’s another one coming at 10! They just don’t publicize it…”
Well, 10 AM came and went with no additional ferry appearing. So much for this girl’s insider info. I went to the bathroom and L.J. went for coffee and a bagel.
There was a flurry of activity a little after 10, something called The American Princess pulled into slip 2 and everybody got excited. It was a different kind of ferry, but sported the NYC Ferry logo. Then an East River ferry pulled into another slip, and a NY Water Taxi into another. It was a very busy 15 minutes of boats churning water and lines colliding. At 10:20 our boat rounded the pier but had to wait for the American Princess to vacate slip 2.

At exactly 9:30 we started to board. They only allow 130 people on board each trip, and we barely made it. Only ten or so people behind us got on.
The surprising thing about it is that there were plenty of empty seats left. Even after more people boarded at Sunset Park there were empty seats.
The boats go pretty fast and the ride is relatively rough if you are standing, so I can see why they don’t pack the boat S.R.O.
At 11:30 I led the troops off the boat and up to Rockaway Beach Blvd. for the short bus trip to Beach 98th Street. We wanted to go there because it’s near the food stands and bathrooms. We made our way onto the already crowded beach.
You have to keep the area in front of the lifeguard stations clear, so the wonderfully empty spot of beach we headed to was off limits. More and people came behind us, there was a mad dash for any open bit of beach. We found a spot, a little to close to the tidemark for my taste, but it was now or never. We made camp.
I’d made a bunch of chicken drumsticks in my special molè and jerk sauce, my contribution to our outing. I know Jennifer is vegetarian and Danusia didn’t want meat so I brought five drumsticks, two for me, and one each for L.J., Olya, and Nicolai, who were joining us later. Jennifer and L.J. had a big bag of cut up fruit and Danusia had made a nice bean salad. We had six hardboiled eggs and a salt grinder as well. One cannot enjoy a hardboiled egg or a chicken drumstick without a little salt.
L.J. declined the chicken because he’d hit a deer upstate last week. The deer had run off, but the car damage was enough to sour him on meat for now.
Olya and Nicolai arrived close to 2 PM, along with our first brush with the tide.
After some pestering from me Nicolai accepted a drumstick. I was worried that despite our little cooler the chicken would go bad.
Afraid of the tide swamping us, I put down my crossword long enough to start building a berm against the tide. I pointed out that it was also important to have runoff channels on either side to divert the water away from us.
The water was cold, and the first time I only went in waist deep. Danusia and L.J. went in all the way.
The tide crept closer, and I looked up high tide on my phone. 4:45 PM. We weren’t going to make it; our spot would be underwater soon. 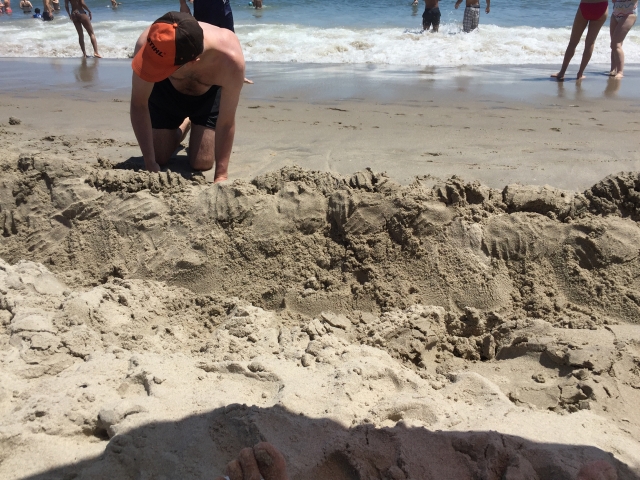 L.J. did the majority of the engineering on the project following my direction.

We all furiously worked on our berm, and after our neighbors got a taste of a wave they joined in.

Danusia and the neighbors work furiously.

Pretty soon there was a berm 25 or more feet long in front of us, much to the annoyance of the “Nutcracker” salespeople marching up and down the beach, who were trying to avoid the edge of the tide.
I was alone, and I put down my crossword for a minute when the inevitable happened. A monster wave came and smashed right through our almost 2-foot high berm and soaked out entire bed sheet. I barely had time to snatch Danusia’s handbag out of the water, it did get somewhat wet. Our entire beach blanket was now soaked and covered with the remains of out seawall. My crossword was ruined. The whole incident just took all the fun out of the day for me.
Since I got soaked as well, I figured I might as well go all the way into the cold water to wash off all of the sand I was covered with. I did that after we were able to reposition ourselves a bit further back.

One wave wiped it all out.

I caught one good wave and body surfed in, but when I stood up a bigger wave caught me and knocked me under. Then it happened again. I went to dry out on our secondary beach blanket, a third the size of our bed sheet. I sat to dry and sulked, both ears clogged with seawater. I stared off into the ocean. I just wanted to go home but everyone else was having fun, so I just sat and stared.
Then I saw dolphins frolicking about a hundred yards off shore. I watched as their fins crisscrossed the area in front of me, sometimes three of them would hump their backs in the air in unison. I was riveted, they were beautiful. Some guy tried to swim out to them, but the closer he got, they further they swam. I wished I was a better swimmer so I could give it a try, swim out to them and forget about my ruined crossword and ego. For a bit I felt a little better, but I knew only a good shower was going to make me happy again.

1 Response to LONG LINES, DOLPHINS AND A ROGUE WAVE