PROTEST AND A SHOW

Posted on February 18, 2017 by xaviertrevino 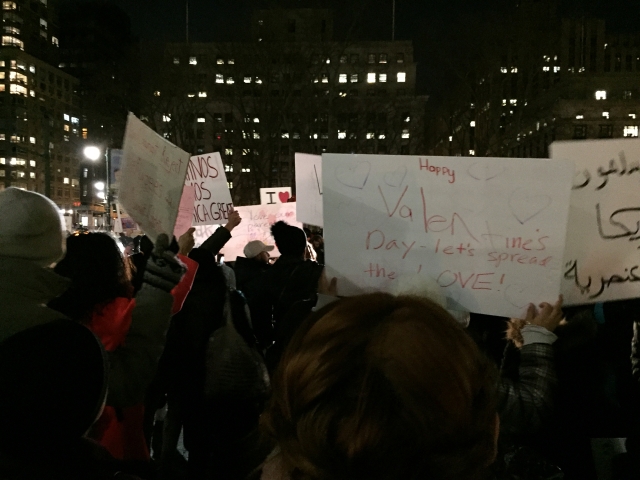 For Valentine’s day Danusia and I were going to a show. The Wooster Group’s production of “The Town Hall Affair,” an irreverent look at Norman Mailer’s raucous 1971 confrontation with leading feminists at New York City’s Town Hall. The event was filmed by Chris Hegedus and D.A. Pennebaker; who released it as Town Bloody Hall in 1979.
The film is the basis for the play, in which Maura Tierney plays Germaine Greer, Kate Valk does Jill Johnston of the Village Voice, and Diana Trilling is played to fun effect by a man, Greg Mehrten.
Norman Mailer’s tremendous ego required two actors, Ari Fliakos and Scott Shepherd. 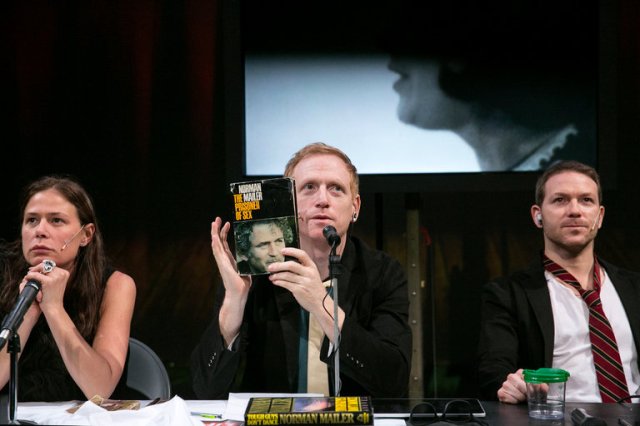 But first, a protest!
It was announced on Facebook Monday that there would be a protest in Foley Square at 6 PM Valentine’s day against Trump’s anti-immigration stance. Danusia said she wanted to go, and as an immigrant myself, I was interested too. But I pointed out that though close by, probably a mile or so, the protest would overlap with our show, which Danusia said was to start at 7.
We got to the Performing Garage at 6:30, and after looking at the poster for the show we realized it wouldn’t start till 7:30. I know from experience that the doors wouldn’t be opened till 15 minutes before the show time. I wasn’t happy.
“Why don’t we go to the protest?” Danusia asked enthusiastically. Less enthusiastically I agreed. It was better than standing on Wooster Street for 45 minutes. We caught a downtown R train on Broadway and rode it one stop to City Hall. We walked the remaining five or so blocks to Foley Square where we found the demonstration.
There were probably three hundred people there, plus a hundred or so law enforcement types. There was no major media, no speakers, and no real organization. Just clumps of people with signs. There were a few people with tubas and assorted brass instruments trying to fire up the crowd. Every once and a while a chant would flare up and die down. Luckily it wasn’t too cold.
A girl in all white makeup and a white outfit portraying the blindfolded statue of justice got most of the media attention. 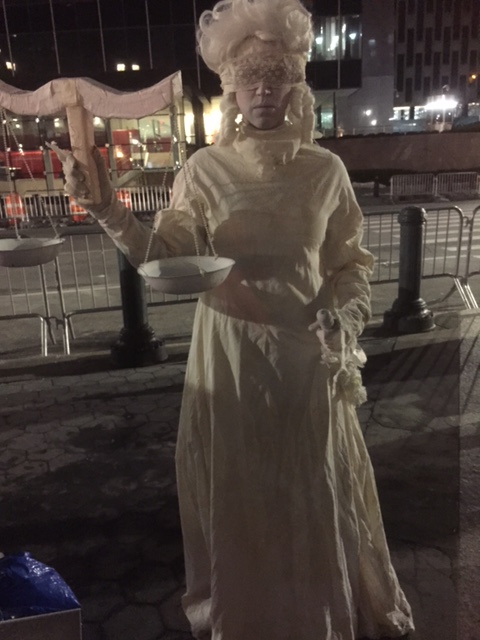 As close to 7 PM as I dared I suggested we start making our way back to Wooster Street. It was a 20-minute walk.
The best part of the play was when the two Normans wrestle on stage after one bops the other over the head with a hammer. It looked pretty real and it was loud when Scott Shepherd hit Ari Fliakos over the head. They were re-enacting a scene from the Norman Mailer directed (and written by also, I’m afraid) Maidstone, from 1970. In the movie it’s Rip Torn hitting Mailer over the head. I wonder how different history would be if it had been a real hammer and some real elbow grease put into that strike. Why we’d have no Executioner’s Song! And no Town Hall Affair, either. You can’t have everything, I guess.
Anyway, the on-stage scuffle combined with the on screen inadvertent hilarity was the high point of the evening.
Not that the rest of the play was no fun, it was, but for me that was the best part.
We also had the good fortune to spot the actor Bill Camp in the audience, Danusia thought at first that he was one of the actors in Animal Kingdom but I could tell he was no Australian. With a little brainstorming we determined that he was the cop Detective Box in The Night Of on HBO last summer.
Danusia went up to him after the show, and it turned out that the striking woman with him (in an equally striking Carhart one piece canvas coverall) was none other than Elizabeth Marvel, Madame President on Showtime’s Homeland. I knew there was something familiar about her…
Yesterday we went to another protest/demonstration in Washington Square Park. It was billed as a general strike, and we were promised speakers for this one. But by 2 PM the promised first speaker hadn’t shown up.
This one was a little bigger, maybe 400 people. There were bullhorns and chants, and some semblance of organization, albeit a little flaky. 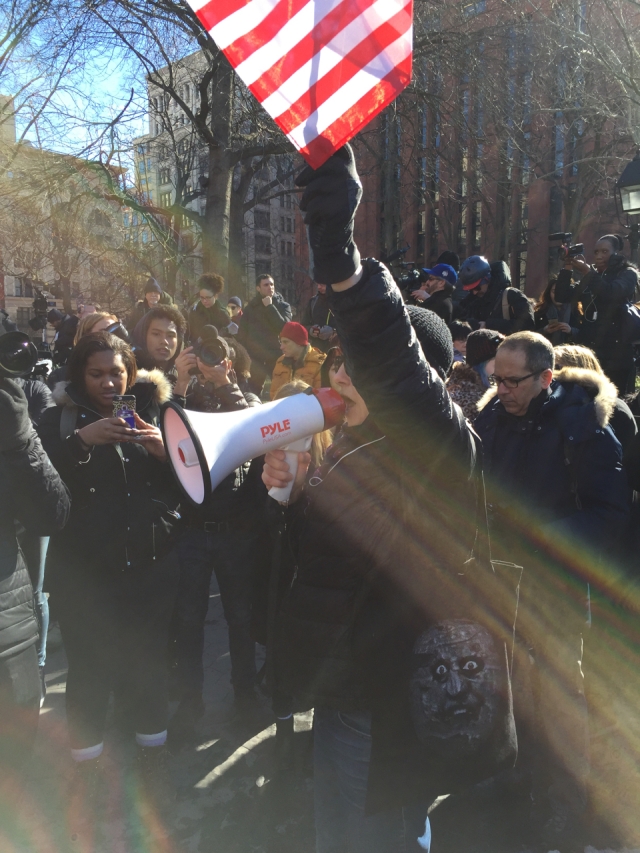 This woman was having a hard time with the bullhorn.

A guy offered us a placard on a stick, and when I took it he asked for a donation.
“For printing costs,” he said. Danusia gave him two bucks. There were a few people selling buttons. Some good homemade posters and people dressed up weird. This was Greenwich Village, after all, the capital of dressing weird. 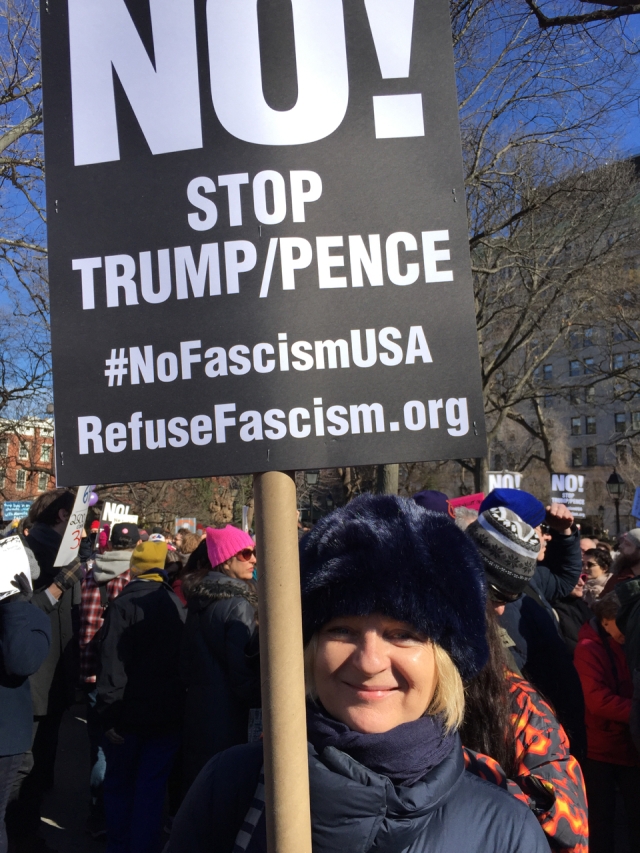 There was a guy in the 70s who looked and dressed just like William Shakespeare and wandered around McDougall Street all day long. There were also really big protests against the Vietnam War that I attended back then. I guess people today aren’t mad enough yet.