Only in New York can you go from hunting the whale to hunting the flea in a week.
Actually, the flea hunt started some time ago, if you read this blog you’ll know about it, if you don’t here’s a brief synopsis:
The last week of June into early July Danusia and I cat-sat for our friends Ezra and Jenny at their cottage out in Rockaway Beach while they vacationed in Spain. We brought along our cat, Kiwi in order to make things easier. Of course, Kiwi was totally traumatized, and didn’t get along with their three cats.
At the end of our 12-day stay, we returned to Harlem with Kiwi and all our stuff. Two days later Jenny texts me that they have fleas in Rockaway. We quickly discovered we have fleas in Harlem, too.
There followed a frenzy of cat combing, spraying, flea medicine application, washing, vacuuming, and hunting. The cat was totally traumatized (again!) by our obsessive combing and peering through a tiny magnifying glass at the area around her ears. I once saw a girl in a pet store declare a cat had fleas by looking around the cat’s ears, so I gave it a try.
Texts followed from Jenny that Ezra had found fleas crawling on his arms while driving his car, and on two of their cat’s faces. One day Ezra said:
“Is there any way we can pin this on Kiwi?” 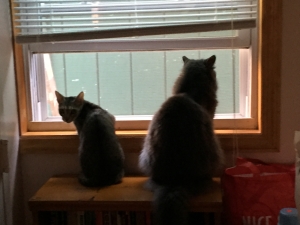 These are the culprits, not Kiwi.

Not a chance, buddy. They came from your cats, that you unwisely let roam outside. One ran up a tree, trees have squirrels, squirrels have fleas, fleas hang out in trees. Pure poetry, if you ask me.
We found fleas; mostly dead ones and one live one that jumped out of a bed sheet we’d taken over to the cottage when we stayed there. (Don’t ask.)
I had bites, lots of them. Every day I awoke with new bites. Danusia had none, and I totally resented that.
“How come they don’t bite you?” Same with mosquitos, they bite me, but not her.
Eventually the bites stopped and everybody calmed down. Then one day last week Danusia slapped at something on her thigh as we watched TV. She presented me with a tiny corpse, and I reached for the tiny magnifying glass, or as Danusia calls it, “enlarging glass.” Jenny got a kick out of that.

I looked, and yes, it was a tiny insect, flea sized, but with wings. She slapped at another.
“Are they fleas?” She asked.
“No. Fleas don’t have wings. They are gnats.” I said.
“What’s a gnat?”
“A small flying insect,” I explained. There were sighs of relief all around.
Last Monday I worked for my friends Elly and Eddie in their garden and I cleared out all of the dead leaves behind their bushes. I wore shorts and my legs made contact with a lot of uncomfortable foliage. My legs were on fire when I was done.
The next day my legs were covered with big red spots, insect bites for sure. I got out the hair dryer and did the heat treatment, which gave me some relief from the pain and itch, but not before enduring a lot of pain and itch for most of the day, the effect not fully taking hold till I left home for work. Could it be the fleas were back?

After giving myself the heat treatment when I got home, I immediately grabbed the magnifying glass and accosted the cat. She squirmed out of my grasp and ran away.
I searched every inch of the bed for signs of fleas. We combed the cat and looked for flea shit. (The only way to really tell.) I longed for a bigger magnifying glass. I knew I had one somewhere; one I inherited from my dad after he passed away. I hadn’t seen it in sometime, and I harbored a secret suspicion that Danusia had gotten rid of in in one of her fits of “de-cluttering.”

So, there were no fleas, and i learned to never wear shorts while gardening again.
Yesterday I was looking for a battery for our electronic scale, which I wanted to use after watching on the Today show that people who weighed themselves every day were more successful at keeping off weight than those who did not. I bought the battery a month ago when I could see the scale display was fading. The scale hasn’t worked in a week, but I was too lazy to look for the battery. I put things away and then I can’t find them.
I found the large enlarging glass instead. Then I found the battery.
I ran for the cat to do an examination, and went over the bed again. No sign of fleas.
Then I put the battery in the scale and weighed myself. I kinda wish I hadn’t found that battery, but you can’t turn back time.

2 Responses to HUNTING THE FLEA