Posted on August 9, 2015 by xaviertrevino 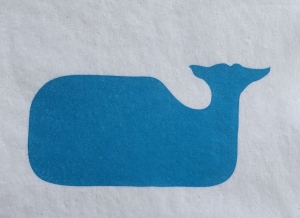 I spent Monday and Tuesday nights on Nantucket last week. I wouldn’t have been able to do that if it hadn’t been for my lovely wife, Danusia. She’d been asked to perform one of her stories at a MOTH Main Stage event on Nantucket Tuesday night, and then she was to go to Martha’s Vineyard to do a repeat performance on Friday night. We were able to afford one plane ticket for me to see the Nantucket performance, and since I’ve already been on M.V. a few times (more on that later) I was happy with that.
I flew on a Jet Blue 100-seat jet and took the bus downtown after I landed. The bus was only $2, but when I got on the driver told me they don’t make change. I said I would go back to the terminal to get change for my $5 bill.
“You got four minutes,” he said. I ran into the terminal, franticly asking strangers for change of a five. The clock was ticking so I spotted a cop in a seriously peaked cop hat and asked him where the gift shop was.
“Ovah there,” he said in his thick Boston accent. I ran ovah there and there was no one at the desk. I thought quick and instead of having to hear “no change” I grabbed a 75¢ postcard off a rack. That immediately brought a middle- aged woman to the desk and I said,
“I’ll take a postcard.” I plopped my fiver down on the counter, and she handed me four singles and a quarter. I ran out onto the street to catch the bus. I made it with seconds to spare. 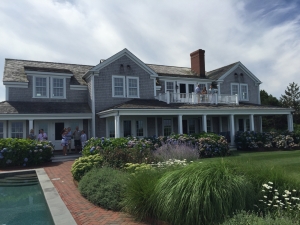 This is the setting of the fundraising breakfast.

Danusia had told me the place we were staying at (The Brandt Point Inn) was on the street, but we were to sleep in the white house behind the grey one on the street. I walked through the parking lot to the white house and walked in, expecting to find the keys on the side table by the front door, as Danusia told me they would be. There was a big tan Labrador retriever in the enclosed porch that began to bark at my intrusion. He was behind glass, so I didn’t worry too much about him. I started yelling “hello! Hello!” The dog knew another way in and suddenly he was right in front of me barking and growling and bearing his teeth. I beat a hasty retreat to the parking lot, where I found one of the housekeepers, who called the manager, who showed me where the keys were, in the first grey house.
Of course, my lovely wife insisted she’d said not the white house, the grey house.
The manager said “well, I’m glad you don’t own the Brandt point Inn now,” after I told her of my mad dog encounter.
Danusia was rehearsing, that’s why she hadn’t been there to meet me. After the rehearsal I joined her and the rest of the Moth crew for dinner at a lobster place. I had a lobster; you have to have lobster if you are on Nantucket. It was yummy.
The next day we went to the beach by the harbor, we were on the leeward side of the island. I wanted to see the Atlantic side, but not having a car or bicycle that was out of the question. It was still beautiful.
That night was the performance at some Unitarian church downtown, and Danusia as always gave a socko performance, as did the others. There was a small party at a nearby bar afterwards. There were some great horderves and for desert the best apple cider doughnuts I ever had in my life. Dense and greasy, they were laid out in a drizzle of molasses.
I was to leave on Wednesday, but first we were invited to a big breakfast at a big Moth donor’s home. The name of the game was fundraising, and that’s what we were doing on Nantucket. It was a beautiful house with a private beach. Dan Kennedy, the Moth M.C. and host told a funny story about a 22- foot Python somewhere in South America to the 60 or so guests. We had coffee, muffins, and fresh fruit and Danusia and I took a walk on the private beach.
The one thing I wanted from my visit to Nantucket was a whale. The night before as we lay in bed I declared to Danusia:
“I want a whale.”
“You want a what?”
“A whale. Not a real one, maybe a wooden one. I saw one in a store downtown earlier. A whale is a proper souvenir of Nantucket.”
Ever since I read Moby Dick I’ve associated whales with Nantucket. My son was very into whales as a kid and I’ve always liked and admired whales. And the fact that a woman cellist playing “Farewell to Tarwathie” opened the Moth performance reinforced my whale fixation.
“I’m not leaving without a whale.” I already had a whale napkin from the lobster joint, but that wasn’t enough.
After the big fundraising breakfast a cab dropped us off downtown and I immediately went whale hunting. The best place to go was the Whaling Museum, of course. They had the perfect thing in these big carved whales:

I wanted the white one, of course, but at $100 for the small one it was out of the question.
“Why don’t you take a picture and you can carve your own?” Danusia suggested. I took the picture and I might just do that someday. In the meantime I found a small white cast metal whale for $8, just the ticket. I bought that and a whale bookmark, in case I ever read Moby Dick again.

So, now I’ve been to the three major islands off the coast of Long Island; Block Island, where I got a paper-maché fish, Nantucket, where I got my whale, and Martha’s Vineyard, where my first wife came from. I think I will carve that whale someday.

I like to write, take things apart and put them back together. Also our cat Snookie, turtles, and my lovely wife Danusia.
View all posts by xaviertrevino →
This entry was posted in Uncategorized and tagged Blck Island, Dan Kennedy, fundraising, humor, Martha's Vineyard, Moby Dick, Nantucket, souvenirs, The Moth, whales. Bookmark the permalink.

3 Responses to HUNTING THE WHALE