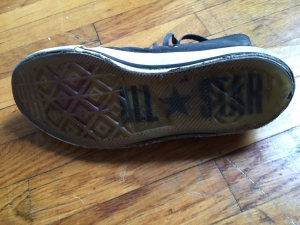 When I was a kid the big deal sneakers were Converse Chuck Taylors, or All Stars; depending on what part of the sneaker you looked at. I always wanted a pair, but we were poor, so mom said, “no dice.” Second best were the copies, the sneakers that looked almost like Cons, but they didn’t say “All Star” on the little tab on the heel.
“What’s the difference?” My mom would say. The difference, mom, is that they don’t say All Stars on the heel.
Of course there were other tell tale signs, no circle on the ankle with the star and “Converse All Star,” the black piping on the toe cap, etc.
So when I went to school with my immos, as they were called, I endured a lot of taunting.
There were also PF Flyers, the shoes with the magic wedge in the heel. 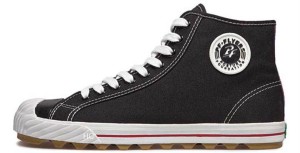 “Guaranteed to make any kid jump higher and run faster” was their boast. Couldn’t afford those either. PF Flyers are still in business, if the boast and wedge commercial are not.
Last choice in my neighborhood were Keds, Pro Keds if possible, (probably more expensive for the Pro.) still a cut above the dreaded immos.

Cons exploded in popularity when The Ramones first album came out, though if you look carefully none of them are wearing cons. Johnny is wearing white Vans slip-ons, and it looks like Dee Dee has on white Chuck Purcell’s. Tommy and Joey have on no-name boat shoes, what we used to call “<skippies,” short for “skippers” in the projects. Skippies were considered white-boy shoes where I grew up. They had no muscle.
In the mid ‘70s when The Ramones exploded the most popular kicks were Adidas or Pumas, leather sneakers. If you wore canvas you were poor. So the canvas sneaker industry owes a lot to The Ramones and other punk-rock groups for the canvas sneaker revival.

At one point in the ‘90s I weighed a lot, and had to wear EEE shoes, and one of the few companies that made EEE sneaks was New Balance. I wore those and some Vans came in EEE, so that was it for about 15 years.
I’ve gone back to a D width, been so for over 15 years now, and at one point I went back to All Stars, which I started buying for myself as soon as I started working.
When I was in therapy a few years ago my therapist noticed a pair of Chucks I had on, these:

They are John Varvatos Chucks, and they come in all sorts of different finishes, some in leather and suede. These are canvas over-painted with black latex.
I’ve got a green leather pair with zippers on the side somewhere, but I think I let my eyes and pretension get the best of me that time. I told my therapist those latex painted ones cost $100, the most I ever paid for sneakers at that point.
“Some guys spend a lot more. It’s an addiction.” Tell me about it.
Varvatos hasn’t come up with anything particularly interesting in their Converse collaboration lately, and being out of work I was looking to save anyway, so I went looking for a pair of Vans skippies. Of course Vans doesn’t call them that, that’s my holdover word from my projects days.
I went to DSW, but they didn’t have my size in the white lace-ups without the stupid foam heel collar. Those always wear out. The girl at DSW said I could order them in store and have them sent, free shipping. That worked for me so I paid.

I walked out of the store in 14th Street, and decided to have a quick peek at Nordstrom’s Rack. If they had them I could always cancel my DSW purchase.
I found these babies: 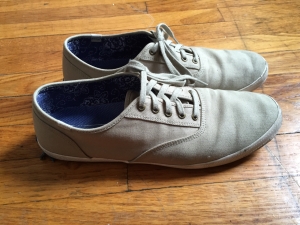 They are Keds, I never knew Keds made skippies too; and they were $27, $22 cheaper than the Vans. I decided to let the Vans come anyway, and I got them the other day. A man can never have too many kicks, can he?

I like to write, take things apart and put them back together. Also our cat Snookie, turtles, and my lovely wife Danusia.
View all posts by xaviertrevino →
This entry was posted in Uncategorized and tagged addiction, Chuck Taylors, Converse All Star, humor, John Varvatos Converses, shoes, sneakers, style, The Ramones. Bookmark the permalink.

2 Responses to JUST FOR KICKS