Posted on November 15, 2014 by xaviertrevino 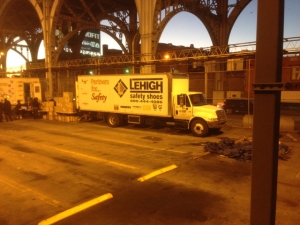 Like I said in my last post on Thursday I mad a stupid mistake in the wake of successfully completing a job last Wednesday. This is a typical New York cab ride story, or maybe not so typical.
Wednesday I got into a cab on 9th Avenue and 53rd Street and told the driver to take me to 152nd Street and Amsterdam Ave. I didn’t pay much attention, focusing instead on counting my money and then he asked,
“52nd Street, mister?”
“I said 152nd Street. Uptown.” Realizing that he’d made a turn onto 10th Ave and was crawling up in heavy traffic I said,
“Take the West Side highway please.”
“This is the Bronx, mister?” he asked in his Indian or Pakistani accent.
“No, it’s in Manhattan.”
“One-five-two Street? One-five-two is in the Bronx, mister.”
A cab driver that thought Manhattan ends on 125th Street. I should have gotten out right then, but the thought of lugging my tools out of the trunk somewhere near 57th Street made me explain to him that there is a 152nd Street in Manhattan.
“Is the Triborough bridge mister?” This was getting stupid. He was looking at his little laminated map, and asked me to show him. Of course his map only had Manhattan up to 125th on the front of it, the rest of Manhattan was on the back. I found that part and showed him where 152nd Street is.
“Just go up the West Side highway and I’ll tell you where to get off.”
“OK, mister.” We were already at $8 and hadn’t gone ten blocks.
He got on the highway and we headed uptown, and I relaxed. I’m not sure which exit to get off, I know for certain there’s a 157th Street exit but I figured there’d be one at 145th Street, and that would be best. I saw the sign for 125th, and got ready. That’s when I made the mistake.
“Get off here,” I said, spotting an exit. That’s when I realized we were at 125th, not 145th. Oh, well, we’ll just go up Riverside drive, I thought.
When we got to 11th Avenue under the trestle for the Metro North the cabbie said,
“This is Triborough Bridge, sir.”
“It’s not the Triborough, it’s the Metro North.”
“But sir, you said Triborough is on 125th Street.” That was true; I mentioned that when he thought it was on 152nd.
“It is, but on the East side, this is the West side. Just make a left here and go up Riverside drive.

View of New Jersey from Fairway.

Except you can’t make a left on 11th Avenue. You have to get back on the West Side Highway or go to Broadway. As we were figuring out what to do I saw a big white truck with the words Lehigh Safety shoes on it. Then I saw a parking lot, and a giant building on 132nd Street that said: Manhattanville Bus depot. We’d also passed Fairway, which ironically was my next destination after dropping off the tools. I briefly toyed with the of just getting out of the cab here and going straight to Fairway (we needed milk) and ditching the cabbie who didn’t know shit. But the thought of tools plus groceries kept me in the cab. We finally got back on the Highway and made it to 157th Street and shortly after, home.
I dropped off my tools and walked back to Broadway to catch the M4 bus. At least I was certain the bus wouldn’t get lost.
I got off at 133rd Street and made the long walk down the hill to Fairway on 12th Avenue. That’s when I realized I was walking by the giant Manhattanville bus depot, and at the end was the parking lot with the Lehigh safety shoes truck I’d seen before parked in it. There was a line of MTA workers waiting to get their new shoes.

I remembered an article in the papers a while back about EMS workers getting written up for not wearing their Lehigh Safety shoes, a job requirement.
I can understand track workers having to wear them; they have steel toes and insulated soles, but EMTs? And bus drivers?

When I was in the army, I bought a pair of Cochran jump boots from a guy in basic training in anticipation of becoming a paratrooper. I wasn’t required to wear Cochran’s, but they were cool and I wanted to. I had a sergeant who refused to buy a pair, just wore plain combat boots with his dress uniform.
“If the army wants me to wear something, they gotta give it to me for free,” he said by way of explanation.
The city issues these shoes to their workers, and that’s what I was witnessing. I’m glad I don’t have to wear any special kind of shoes, because these shoes are pretty ugly.
Anyway, I got to Fairway and got my milk and whatever else I needed. It was my first visit to this Fairway, and if you’ve never been, I suggest you dress warm. The part of the store with the meat, fish, and dairy is like one giant refrigerator. I froze my ass off in there.

I like to write, take things apart and put them back together. Also our cat Snookie, turtles, and my lovely wife Danusia.
View all posts by xaviertrevino →
This entry was posted in Uncategorized and tagged Fairway, getting lost, Harlem, jump boots, Metro North, misunderstandings, MTA, New york, safety shoes, taxi ride, Triborough Bridge, West Side highway. Bookmark the permalink.

1 Response to WRONG EXIT TO HARLEM