Posted on November 13, 2014 by xaviertrevino 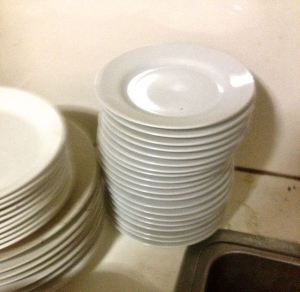 I’m missed Tuesday again this week, for those of you who are paying attention, (or not paying attention) but last week I blew off a second post altogether. At least I’m catching up today, Thursday.
And no, I’ve not become a secret Bokonist; I have actually been so busy that I wasn’t able to write a post last Tuesday or this Tuesday. But I can see how it can all relate to being a Bokonist, and if you don’t know what that means read Cat’s Cradle by Kurt Vonnegut Jr.
Last Tuesday I replaced a floor beneath someone’s toilet, a dirty job that took most of a day, and I was so exhausted I didn’t even consider writing a post when I got home. On Wednesday I started on another job, I thought it was going to be a cleaning job, and some of the work did involve cleaning, but it was more of a “clean-out” job. I had to help empty the apartment of a man who had recently passed away. The gentleman was a writer and a professor; so he had a lot of books, well over a thousand, I would say. I wasn’t going to count. He also had three complete sets of china, and even some stoneware. Stoneware weighs three times as much as china, I discovered.
He also had tons of silverware and pots and pans, enough to cook for and serve a platoon. There was also clothing, Tupperware, paper clips, electronics, all of the stuff that makes modern life livable but is useless when we go.
But the books were the thing, the priority, they had to be taken down off the shelves and dusted off.

This is the old building I was working in with the clean-out job. Beautiful.

The sad thing about life is that the things that are important to us are not necessarily important to anyone else, and when we go so goes our stuff. I did most of the heavy work, carrying many bags of garbage and recyclables down to the basement. 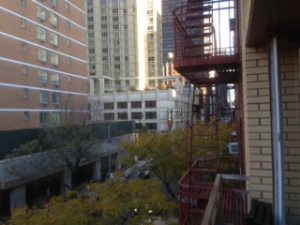 View of 8th Avenue during the day.

Thursday I started a new job, preparing an apartment for a couple of guys moving in. I swapped out their light fixtures from the old apartment to the new, put some bars up in the closets, re-caulked the bathroom, put up a door on their door-less linen closet, painted the door, took down the shelves from old apartment and put them up in new apartment, etc. The door was the hardest because it was too wide for the opening and I had to plane it down bit by bit till it fit. This job took five days, Thursday, Friday, Sunday, part of Monday, and yesterday. I would have finished Tuesday but I had to go back to the old professor’s apt to dust and sort the rest of the books, and there’s still a couple of hundred up on the shelves.

The last of the books.

And Monday I got a call about putting up a window blind. This job was on Central Park West, so it was easy to go there before the guys on 8th Avenue.
I’d left most of my tools at the 8th avenue location, not wanting to lug this stuff up and down the subway stairs for five days, so I told the woman on the phone I had no tools.
“Oh, I’ve got tools, honey. Don’t you worry about that,” she’d said on the phone.
Sure enough, she had a Black and Decker plug in drill, and the right ceramic drill bits for drilling into the plaster and cinderblock wall. She even knew it was plaster and cinderblock. She was an older woman in her ‘70s named Joan, and she said,
“I used to own a house. If I was younger I woulda done it myself.”
Well, I’m glad she asked me. I’m always happy to be of service.
I finished with the 8th Avenue guys around three, and I treated myself to a cab ride home with my forty pounds of tools. There’s an interesting story there, but you’ll have to wait till Saturday to hear it. On Saturday I have to install a showerhead, lock cylinder, and some shelves for another friend. But count on me getting my blog post in before I head over to the Upper East Side.

I like to write, take things apart and put them back together. Also our cat Snookie, turtles, and my lovely wife Danusia.
View all posts by xaviertrevino →
This entry was posted in Uncategorized and tagged apartment living, blogging, Bokonisim, death, family, handyman work, humor, moving, New york. Bookmark the permalink.