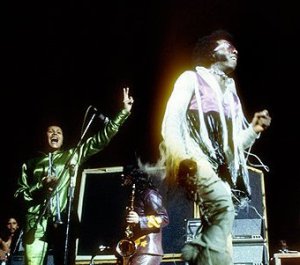 45 years ago when I was 15 I spent the summer working as a day camp counselor at my local church, St. Patrick’s on Willoughby Ave. in Brooklyn.
It was a Job Corps program, and the church did not pay us directly, we had to go to downtown Brooklyn every Friday to get our paychecks somewhere on Fulton Street.
The quickest way to get there from the church was to take the old Myrtle Avenue El to the last stop, Jay Street. I would wait for the train at the Classon Ave. station, and that summer I started seeing posters for some music and arts fair that was to take place in August someplace upstate. It was to be called Woodstock, and the list of groups was very appealing, I was already into rock music and hanging out with a local band that did Sly and The family Stone covers exclusively.
But I had no idea how to get to White Lake, N.Y., and I could only fantasize about it. 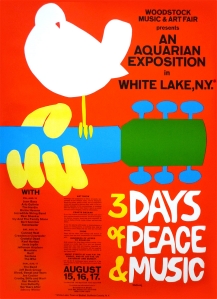 The poster I saw all summer.

I had seen some concerts; I’d seen Traffic at the Academy of Music and The Jefferson Airplane for free in Central Park. But this was a big one, and I actually had enough money for a ticket, since I was getting paid $40 a week, more money than I’d ever seen in my life.
As the day drew near, my friends that had the Sly Stone cover band started talking excitedly about the upcoming Woodstock show.
The older brother of the guitarist Michael, was the road manager for Sly And The Family Stone, and Sly was playing at Woodstock. Michael and my friend Juan, who was the base player were going as roadies. Michael’s brother Kenny who was Sly’s road manager would get kids from the projects to carry amps and do roadie work for free and keep the money that was budgeted for roadies with the promise of seeing the show for free and maybe meeting Sly.
“Can I come?” I asked meekly.
“You’re too young. Your mother’s not going to let you go,” they answered, almost in unison. They were 17 and 18, and only let me hang out with them because I had money to buy weed, I suspect.
I started working on my mom, who knew my friends from me bringing them around for snacks after school.
“How are you getting up there?” She asked.
“In the equipment truck,” I said.
“And where will you stay?”
“Well, Sly is only playing the first day, I guess we’ll be back after that.”
Of course I had no intention of coming back that night, but I wasn’t going to tell my mom that. She relented and gave her approval.
“Kenny’s picking us up in the truck at 5am in front of the building, and if you’re not there we’re leaving without you,” admonished Juan.
The morning of the 15th I got up at 3:30, I couldn’t sleep anymore with so much excitement. As I showered and dressed I heard my mom get up too, she couldn’t sleep with worry. Her baby was going someplace far alone, and she was having a hard time with that.
It was still dark outside, and as I left my mother handed me a paper bag.
“Some sandwiches for later,” she said. 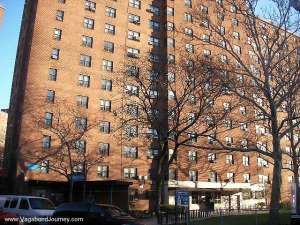 The front of the building on Lafayette Ave.

I went downstairs around a quarter to 5, and waited on the tarmac that separated our buildings from the curb of Lafayette Avenue. I strained my eyes waiting for a truck to appear. 5am came and went. So did 5:30, when it started getting light out, then 6am. No truck, just a few desultory cars slowly passing down the avenue. By 7 people were headed to work, it was after all a Friday, and by this time I felt stupid. They’d probably left earlier and told me to be there at 5 on purpose. I went back upstairs, and my mother wasn’t surprised at all, she’d been watching from the window.
“It’s OK, son, it wasn’t meant to be.” I went to my room and cried, and vowed never to speak to those guys again, or listen to Sly And The Family Stone again. I ate the sandwiches for lunch and stayed in my room playing music all day on my old record player.
That night I watched the news on TV where the big story was the clogged roads leading to the Woodstock music and arts festival.
Later on that evening I was surprised to see the white panel truck Kenny used for the equipment pull up in front of the building and disgorge Michael and Juan and some other kids. Juan lived upstairs from me and I watched him come into the building. I waited a few minutes and went up to the 8th floor to talk to him.
“Why did you guys leave without me?” I asked him after I was ushered into his room.
“Kenny said you were too young, he didn’t want you to come. Besides, we never made it.”
“Sly didn’t play?”
“Oh, he played. I think they took a helicopter there. But we got stuck on the highway, there were too many cars going there. A lot of people just got out of their cars and walked, but Kenny said we couldn’t leave the equipment. Eventually they cleared the road behind the truck and they made everybody turn around. It took forever to get back here.”
I was secretly happy; they didn’t get to Woodstock either. 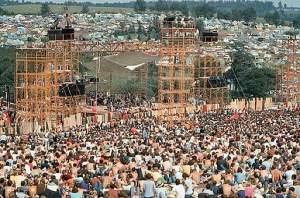 Woodstock at the movies.

Almost a year later we made it to Woodstock, the movie. We took plenty of weed and had a great time watching our favorite bands on the big screen without having to endure the mud, rain, and hunger we probably would have had to if we’d actually been there, but like my mother said, it wasn’t meant to be.

3 Responses to ALMOST WENT TO WOODSTOCK