OOPS, I DID IT AGAIN…

Posted on August 2, 2014 by xaviertrevino 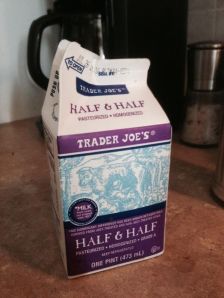 A couple of weeks ago I was making my morning coffee and poured in some half-and-half from Trader Joe’s, and the second it hit the coffee it separated and curdled. I had to throw the whole cup out, and start all over again. Luckily I had some two-percent milk, the lovely Danusia is not a fan of half-and-half and uses that in her coffee and we both put it in our morning cereal.
I checked the expiration date on the half-and-half before I bought it, it was supposed to be good for two more weeks, but obviously it wasn’t. When I poured out the rest (more than half) into the toilet it came out in great solid globs, it was practically cottage cheese by this time. I’d opened it just a few days before.

They are pretty, aren’t they?

Of course this is nothing new, the WORSE store brand half-and half you can buy is the Whole Foods brand, that either goes bad or IS bad the day you get it despite the expiration date on the top. For all their vaunted care for their products I can just envision whole cases of this stuff sitting on the loading platform in ninety-plus degree weather for hours while the stock boys flirt with the girls that work at whole foods, something they like to do even when you are standing there trying to ask a question or have someone get something for you. They’re almost as bad as the kids at the Porto Rico Coffee company, who get annoyed when you interrupt their play by play of last night’s hot date.
So, yes, Whole Foods is the worst and Trader Joe’s is a close second. Fairway only sells milk with their name on it, they have no store brand half and half, so I can’t comment on that.
I can always get Horizon half-and half, never had a problem with that. Or, if I feel like spending even more money, I can get the Stonyfield Farms half-and-half, or organic Ronnybrook farms at a really premium price.

Even prettier but twice as much.

There is also Organic Valley and Farmland, Farmland is the least expensive of the organics but I only see it at Fairway and at the local Food Bazaar.
I should stick to the Food Bazaar, since it is only three blocks away and has the best prices, but they mostly have Cream-o-Land and Horizon, and I’m a terrible snob. I also hate to venture into the Food Bazaar, where you encounter mostly angry fat people with shopping carts piled high with different colored sugar drinks and cases of chip snacks for their kids. If I want to see a fist fight over someone jumping the line this is the place to go.
I used to go to the Bazaar on Sunday mornings just after 7am when they open, about they only time it is empty, but there was always this old Rasta guy with ratty grey dreds in his late 60’s that was always hitting on the 20-something Latino girls at the registers. A guy that old and creaky thinking he’s still sexy is not a pleasant sight to behold.
So I choose to go to these high-end stores in Manhattan and drag my groceries home on the subway in my recycled shopping bags that the lovely Danusia insists I use. I’m lucky I don’t have five kids or it would be really tough to do this.
When I was 13 I spent a week on a dairy farm in upstate NY, my prize for writing an essay about how much it sucked being a poor inner-city kid with no grass to play on. The first night there I was having dinner with the farmer, a man with a red neck and weathered face who wore his ball cap at the dinner table, and the rest of the family. 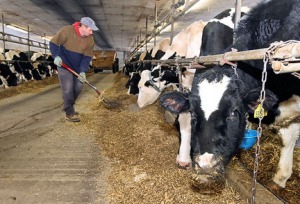 Not the actual farmer, but close.

I experienced rice with melted butter for the first time. I also noted that there were several quart cartons of milk on the table, there were probably six or seven people at the dinner and everyone was drinking milk, ergo all the milk cartons, and when I tasted the milk it tasted sour. I wondered if it was milk straight from the cow and that’s what it was supposed to taste like, so I said nothing.
The farmer, who sat next to me poured himself a glass from the same carton, took a drink, and immediately spewed it out onto the floor next to him.
“Mama, this milk is sour!” Then to me he said:
“Boy, you bin drinking this milk? Why didn’t you say it was sour?”
I had no answer, so I sat mute while a new container of fresh milk was placed on the table. But I learned to throw out sour milk.
It all comes down to price, and the Trader Joes half-and-half is the least expensive by far, trumping even the Whole Food’s brand that comes in a really neat plastic bottle with a blue cap, cooler looking than the waxed paper cartons of all the other products. I have to get over buying stuff by its visual presentation.
So I was in Trader Joe’s on 72nd Street on Wednesday, after putting together some shelves for my writing teacher Charles Salzberg who just rented a stunning place in Trump Towers and half-and–half was on my shopping list.
I carefully read all of the expiration dates on the cartons, and after determining that they were all the same (August 26th) I chose one from all the way in the back of the dairy case, where it’s colder than in the front. I hope I’m not disappointed again, but like they say, hope springs eternal.

1 Response to OOPS, I DID IT AGAIN…