BAD NEWS FOR THE RANGERS

I never watched a hockey game in my life, but last night I found myself glued to the TV watching the second overtime period (I think that’s what it’s called) on the edge of the couch hoping for a Ranger goal. I watched as the men skated back and forth, back and forth, whacking the puck up and down the ice, crashing into each other, falling down and getting up, broken sticks flying everywhere all while listening to the announcer describe the action.

“How does he know who’s who?” I asked the lovely Danusia who sat next to me staring into her iPad. She did not show much interest in the game.

“They must be tired, the game’s been on since 8 and it’s almost midnight.”

She looked up briefly and said:

“But they are sliding on skates. Probably not as tired as basketball players would be.”

“Well this looks a lot more exhausting than basketball,” I said.

I’ve played full court basketball before, and it really sucks running up and down the court. I can just imagine the effort and energy it must take to skate up and down the ice with all that gear on.

“You’ve never ice skated dear, just because you glide on the ice doesn’t mean you use less energy. It takes a lot of energy to propel yourself on skates the way these guys do.” I never tire of reminding her that I ice skated as a teenager.

“Why do they all have beards, baby?”

She grunted a sort of acknowledgement and went back to her iPad.

I stayed on the edge of my seat; my heart falling every time the Kings got the puck.

I’ve never been much of an athlete, nor a sports fan for that matter. My experience with sports is limited to playing softball in the projects league when I was a kid, and briefly joining the Brooklyn Tech football team until I had to carry a teammate piggyback up ten flights of stairs. We had no field to train on, and we ran up and down the stairs and did some other stuff in the gym. It wasn’t for me.

My only hockey experience was when I worked at Con Edison the summer I turned 20. I was in art school at Pratt and going to NY Dolls concerts at night. In the locker room other crews who worked at the power plant with us would challenge our crew, known as the “Performance Unit” to a game of foot hockey.

The leader of the dirty work crews was an old Italian guy named Steve, who was barrel-chested and had hands like paddles. He instantly labeled me “sensitive” as he tried crushing my hand on introduction.

The game was played with a round two pound piece of steel that was the approximate size of a hockey puck. We had to keep them from kicking this thing into our side of the locker room while trying to kick it into theirs. All I could think of during the mad flurry of kicking feet and hands shoved into my face was I hope this thing doesn’t hop up and knock pout all of my teeth. You had to play or you were a pussy. I did not take the offer of a permanent job at the end of the summer.

Not being much of an athlete translates easily into not being much of a sports fan. But I am a New Yorker and I always feel good when a New York team is in the playoffs, even better when they go so some sort of championship. That’s why I’m most familiar with the New York Yankees. 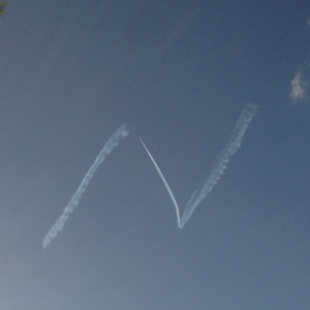 Last week a plane spelled out RANGERS over the east river. I got the R, part of the A, and the N.

Watching the news the past week got my excitement up, and I had to work Wednesday night and had to wait till Thursday morning to find out if the Rangers were still alive or not.

I worked that night with a guy who was more interested in “El Mundial” in Brazil than the Stanley Cup Final.

I was psyched to find out they were, and determined to watch at least some of yesterday’s game. The lovely Danusia had gone to some kind of fundraiser last night so I could watch the hockey game without any undue friction.

“I thought you didn’t like hockey,” she said as I tuned in to the game as she was leaving.

“I don’t but this is the Stanley Cup and the Rangers are a New York team.”

I alternated between the game and some WWII stuff on AHC, not being one for all the chatter between intermissions and such. I tuned in to channel 4 at 11:30 just in time to find out the game was tied. I had to see it through. That’s when Danusia came home to watch me watch the game.

After 12.04 minutes of watching the puck go back and forth and my conversation with Danusia Alec Martinez of the LA Kings got the puck in the net. The crowd erupted and I hit the off button.

“Did they win?” She said looking up from her iPad.

“No honey, they lost. I’m going to brush my teeth and lay down.”

In the bedroom I put the TV on, hoping the news would be on, but I had to sit through the LA Kings hoisting the Stanley Cup over their heads one by one as they skated around the rink in front of the delirious fans.

“That’s an interesting ritual,” I said to Danusia, who sat next to me doing something on her iPad.

“Never mind, the news is coming on.”

1 Response to BAD NEWS FOR THE RANGERS