WE CAN TALK ABOUT THAT

I was going to call this post psychotherapy but there’s already a Ramones song called that. Then I remembered an incident in the lobby at the building I got fired from, where there were two therapist’s suites. Two suites, many therapists. They like to share space; it’s cheaper.

One day a woman walked in, she wanted to know which office belonged to her psychiatrist.

“It’s that door in the rear. Top buzzer.”

“That’s not her name on the buzzer.”

“She shares with the person who holds the lease,” I said.

As she pressed the buzzer, I said:

The woman scowled and sat. She was a pretty middle aged woman with a lot of anger in her face.

The psychiatrist came in pulling her rolling case behind her as she fished her keys out of her bag. I nodded to the woman on the couch, it was her first time meeting the doctor and they did not know each other. She stood and addressed the doctor.

“You’re late.” She said without preamble.

“Sorry, I had to find a parking space. But we can talk about that.”

“And this isn’t your office, you share. I don’t know if I like that.” Added the angry woman.

I was in therapy myself at the time; I did it for almost 13 years, and all with the same person, Judy.

I first went to see her in the summer of 2000, when I was in the middle of a very painful divorce and had just started detoxing from methadone. I was depressed, angry, and anxious all at the same time, and one day I found myself sobbing hysterically in my father’s Hell’s Kitchen studio apartment. He was in the hospital and I was all alone, and I was not yet used to being alone with my own thoughts. I picked up the phone and called my union’s medical services.

They gave me a number that I called and set up an appointment for an intake, and from there I was referred to Judy. Judy had an office on West End Avenue at the time.

We met for the first time, and she was a thin woman a few years older than me with bright orange hair and a nice smile.

The person at the intake also recommended I see a psychiatrist; I probably needed medication. Him I saw for six months or so, and I don’t even remember his name. His sessions lasted 15 minutes. The most memorable thing that happened with him was one day he said, “It’s good to see you smile.” That was towards the end of our therapy.

O didn’t smile much that summer, nor that winter, come to think about it. What I remember the most about that first year was going to Judy’s office and crying through most of the session. I felt so sorry for myself and the mess I’d made of my life by being a drug addict.

I was doing other things too, seeing my methadone counselor and the methadone program shrink as well. Two shrinks and two CSW’s to talk to. But boy, did I need it.

Eventually things got better, and I started laughing with Judy and telling her funny stories about my drug days, and even about being married to my ex, who I was in the process of trying not to hate.

I would relate something to Judy and she would say:

“How does that make you feel?”

I learned all the catchphrases, like those and “Our time is up.”

I should also mention that I started going to a self-help support group, and with the combination of that and therapy I successfully detoxed from methadone the following spring.

But I still had to do something about the anger and sense of loss and the resentment against my father, my boss, the world, and my self, so I continued seeing Judy. I remember telling a friend, who also happened to be a CSW and worked as a methadone counselor about Judy and he asked what kind of therapy it was and how I was paying. When I told him it was through my health insurance he said: “Oh, she’s probably going to string you along as long as she can.”

In our 3rd year, Judy moved to different office on 71st Street just off of West End Ave. By this time I had progressed from being a night porter to being a doorman during the day. I got out of work at 3 and the only opening Judy had for me was at 4:30P.M. I would take the bus down Broadway to 72nd Street and walk to Riverside Park on nice days, and sit in front of the statue of Eleanor Roosevelt at the 72nd Street entrance and write. I had started writing seriously and Judy was encouraging me to do more of it. 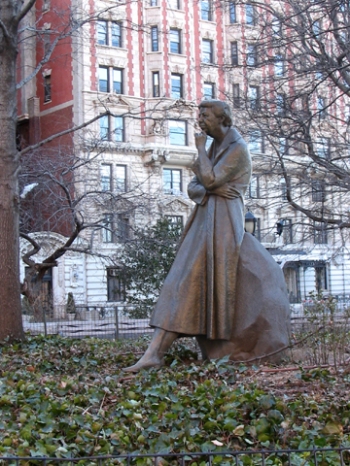 Around then was when I met the lovely Danusia, who read some of my stuff and also encouraged me to write. I started taking writing courses.

In 2009 Judy had to move again, and asked about space near where I worked on 86th Street. I didn’t want her anywhere near my job; I didn’t want anyone from work to know I was in therapy. I told myself that it was because it was none of their business, but in reality I was ashamed of it, in our industry it is a sign of weakness to have to ask for help.

That summer my dad died, as well as a very close friend, one day after the other. Danusia was in Poland, and Judy was on vacation. I had to go through it alone, and I was able to bury my father without the resentments I’d held for so many years. 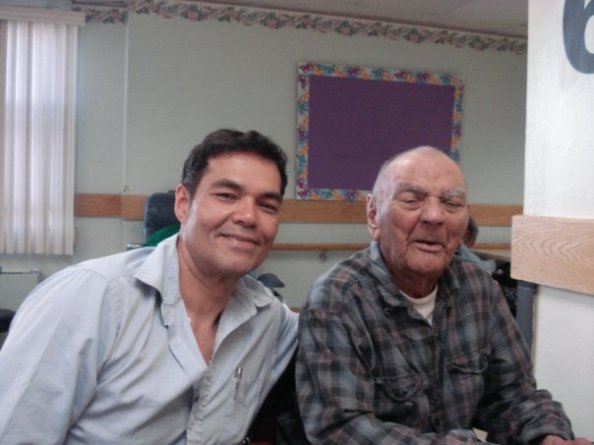 Me and pop the summer he died.

My son was here, staying with us in Brooklyn, but one thing I learned in therapy was not to burden my kid with my problems the way my parents had done to me.

It was at this point that I felt I didn’t need therapy anymore, I was no longer depressed, and I had learned some of the life skills I’d been lacking for most of my life. But how to get that across to Judy?

There was a funny article in New York magazine that fall, about how to break up with your therapist. I was going to show it to Judy as way of a hint, but after reading the article, which had people saying they had to go to therapy to deal with breaking up with their last therapist, I though better of it.

Then my job changed, my health insurance changed, she wasn’t covered but somehow she managed to keep me coming and having my plan pay for it.

I started seeing her less and less, and my writing got better and better, and I have to say Judy was the first person to say: “You are a writer who works as a doorman, not a doorman who writes.”

Judy pushed and pushed, “Did you send out query letters to agents? Are you going to take a more advanced class?”

We got to the point last summer when I saw her once every other week if I was lucky. Then Judy went on vacation and said she’d email me when she got back.

I haven’t heard from her since; but that’s OK, thanks to her help and the help of many others, today I can handle whatever comes my way.

But it would have been nice to say thanks, and goodbye. So if you ever read this, Judy, thank you. And goodbye.

I like to write, take things apart and put them back together. Also our cat Snookie, turtles, and my lovely wife Danusia.
View all posts by xaviertrevino →
This entry was posted in Uncategorized and tagged asking for help, death of a parent, divorce, leaving therapy, Love, medication, methadone detox, psychoanalysis, relationships, resentments, saying goodbye, saying thank you, Talk therapy, writing. Bookmark the permalink.

1 Response to WE CAN TALK ABOUT THAT