Posted on April 9, 2014 by xaviertrevino

I missed posting yesterday because I was busy; I got a little P.A. work on of all things a Polish music video for a Polish pop star. But more on that on Saturday. Stay tuned, loyal readers, it will be worth it.

But what I wanted to write about, what I’d planned on writing about yesterday was about going to my friend Puma Perl’s PANDAMONIUM, a show Puma puts together on occasion at the Bowery Electric on the Bowery, of course. I remember when that place was REMOTE, a bar with little video monitors and cameras at every table with phones where you could call a table to talk to someone you wanted to have sex with that you saw on the monitor. They closed down a while ago.

I don’t even remember why I went to Remote the one time I went there, but I didn’t find anyone to have sex with.

I went to the Bowery Electric a few years ago to hear various friends read the work of Herbert Huncke, junkie raconteur.

I’ve seen Puma’s advertisements on Facebook for a while, and it always looked interesting, but for the past year I worked nights every weekend and couldn’t make it. 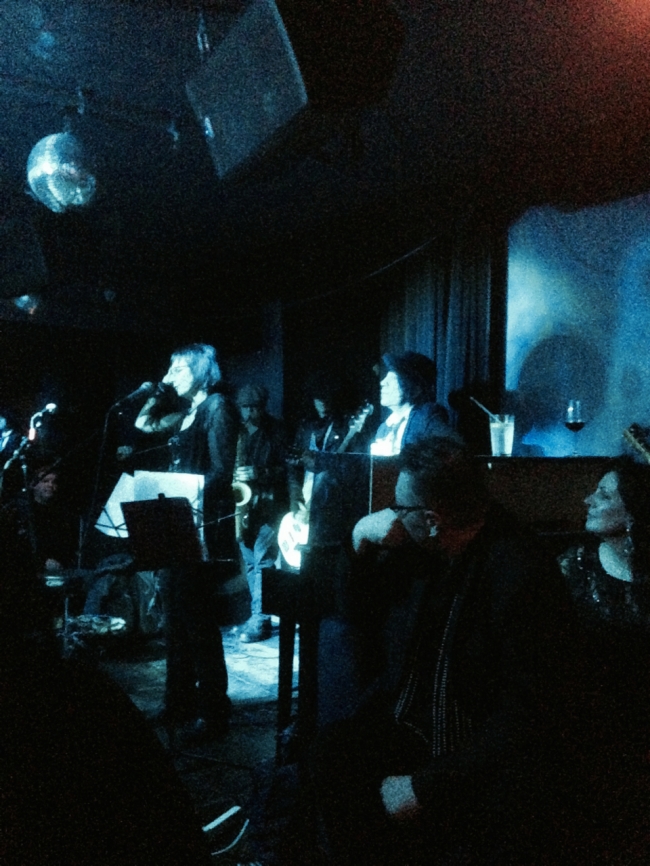 Puma contacted me last month after reading my WHAT DO YOU WEAR TO YOUR OWN EXECUTION blog post and invited me to read at one of her Pandemoniums. “It won’t make you rich,” Puma wrote. But it would be fun, I thought.

I was under the impression that it was all about poetry, but Puma advised me to read carefully, and I did, and it says “Music, spoken word, and poetry.” So I guess I fit into the spoken word category.

“Come down on April 4th and see how it’s done,” Puma wrote in a subsequent email.

It was a lot of fun, though the room used for Puma’s show is about the size of my living room, I got there early enough to get a seat next to my friend Tessa Lou Fix, who was reading some of her poetry that night. Tessa is a wonderful poet, I’ve heard her read at two art shows in the past couple of weeks, and I have to say I’m impressed and I’m a fan. I got to read one of my pieces at one of those shows, the closing of my friend Darryl LaVere’s art show. Darryl is a wonderful painter.

I’ve of course tried my hand at poetry, and all I’ve managed to come up with are some cringe-inducing pages better left in the notebooks I wrote them in. There is a nice one I wrote about my mom that I will publish here before the month is out in honor of National Poetry Month.

Needless to say, I’m always impressed by people who can compress so much emotion and passion into a few choice words that fit in meter.

Puma’s a wonderful poet too, I looked at her website “Knuckle Tattoos” that you can find here.

The pandemonium started with music, a friend of Puma’s named Rick Eckerle sang a few songs, not exactly my cup of tea- to me he was trying to sound like Bruce Springsteen, but what do I know about music?

What was more entertaining was that he was having microphone problems and at one point he asked his accompanist to “turn down your guitar.”

Then came an English fellow named Jeff Ward who read from a memoir called  Parasite, a Crystal meth nightmare. And it was very good. “Meth equals” life was the last line of the chapter he read. Indeed.

This would be me at the next pandemonium, just reading from a drug memoir.

Then came Tessa with her wonderful dark poetry, I guess the theme here is the underpinnings of society, the people like us who used drugs, sex, and Rock and Roll to escape our inner turmoil. I guess I fit right in!

There were a bunch of people who I found interesting sitting in a little group to the right of the stage, in the most comfortable seats- and I found it amusing to see the way they were dressed, sort of like circa 1980’s Brooklyn gangsters and their goomahs. They talked through Eckerle’s entire set and I found it a little annoying. That they turned out to be performers too made it even more annoying, performers should know what it’s like to have a crowd talk while you are trying to entertain them. When two of them got up on the stage, I expected Doo-Wop, but instead they sang three Everly brothers songs, Bye Bye love, Let it be Me, and the classic Jean. It was a man and a woman, Joey Kelly and Donna Destri, sister of Jimmy Destri, the keyboardist for Blondie. 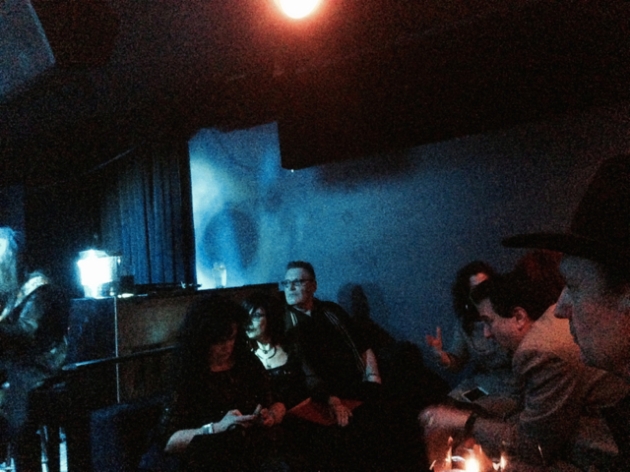 Joey Kelly is in the center with glasses.

They were actually very good, nice harmonies. Joey’s mic kept drooping in its holder when he didn’t keep his hand on it, another inadvertent touch of comedy.

Then Puma went on, and she recited her poetry with a musical backing, a few guys she calls “Puma Perl and friends.” It was a guitar, base and sax, and on this night she had a special guest, Walter Steding on electric violin.

It worked because the musicians were really low key, never overpowering Puma’s voice, though Puma’s voice is hard to overpower!

She did a call and response thing with Walter, voice against violin on one poem, and it was really great fun.

My favorite piece was called “The Perfect Man,” and you can read it if you go to Puma’s website. The Perfect man was anything but perfect, of course, unless you are a person like us- a nonconformist who always aspires to the cheaper things in life.

I’ll be up there in June, which is when the next Pandemonium will be. I can’t wait to add my voice to the din…