The Department of Sanitation of New York was great at plowing the streets after the last snowfall, pushing all that snow against parked cars that then had a hard time getting out. Let’s see, that was January second, two weeks ago. Garbage pickup was suspended because of the snow.

The DSNY also announced that we could put our Christmas trees out on the sidewalks after the first, devoid of all tinsel, decoration, nylon rope, or plastic bags. I put mine out last Monday, the 6th. It’s still there, along with all the other trash I’ve put out since then.

My tree and my trash (and my neighbor’s trash) in front of my building on Broadway.

Whenever I tell a tenant where I live (I live in Williamsburg!) they smile knowingly and say, “Oh, you’re so cool, Xavier.”

“It’s not the nice part of Williamsburg,” I tell them, “I’m right on the border of Bushwick.” That’s right, cross Flushing Ave. and to the North you’re in Bushwick, to the south of Broadway you’re in Bed-Sty.I live right in the point of the triangle.

Of course garbage pickup in these neighborhoods was never a priority for the DSNY, even under mayor Mike. He didn’t care about the poor, let them eat Twinkies, and throw the wrappers on Broadway.

At least 86th Street in Manhattan was cared for under Mayor Mike.

Then came January 1st, and the new Mayor, Mayor Bill.

Mayor Bill dutifully came out to shovel snow on the second day in office, showing his liberal affinity for the workingman, his appreciation for the DSNY and all  other unionized service organizations. After all, they’d been big supporters of the liberal Mr. DeBlasio, friend of the poor and destroyer of the tale of two cities. I think there may be an ACORN somewhere in Mayor Bill’s background. Come to think of it. There’s an ACORN in my background, but that’s a story for another day. A very juicy one, stay tuned. 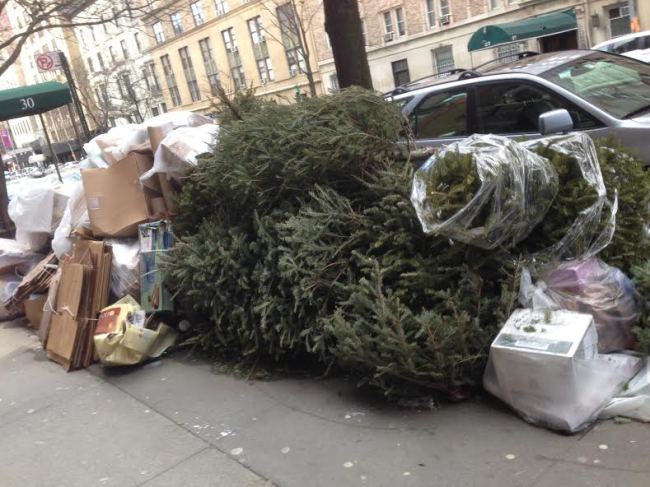 But after the snow was gone, the trees and garbage still remained. 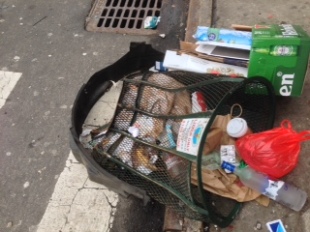 Everywhere I go there are abandoned Christmas trees waiting to be picked up.

Some have migrated to the middle of crosswalks.

Others have taken up position in parking spaces.

I wonder, is it that the DSNY only has one wood chipper? Is it up in the Bronx somewhere slowly making its way down to Brooklyn?

No, wait, Manhattan is always first, I forgot.

Maybe it’s broken, and waiting for a city mechanic (or two) to fix it. Who knows?

What I do know is that there are trees and garbage everywhere. You’d think the DSNY were on strike. But they’re not, every time I pass by the Bed-Sty diner on the corner of Thornton and Flushing there are always a couple of DSNY trucks parked in front and the hard working guys are enjoying a cup of coffee and some pie inside, while my tree and garbage waits to be picked up. Eventually they’ll get around to it, I guess. Hopefully in the next week or two, after the DSNY enforcement guy gives my landlord a few more tickets.

I like to write, take things apart and put them back together. Also our cat Snookie, turtles, and my lovely wife Danusia.
View all posts by xaviertrevino →
This entry was posted in Uncategorized and tagged ACORN, Christmas tree pickup, DSNY, garbage pickup, humor, Mayor Bill, Mayor Mike, mulching, Twinkies, unions, wood chippers. Bookmark the permalink.