Yesterday morning on my way to do the laundry I encountered the usual bunch of women and their children waiting for the Children’s dental Center next door to open. They line up according to who gets there first, but sometimes that’s debatable.

There was a really large woman at the head of the line, large in both height and girth.

“I was here before you.” A smaller woman was saying to her.

I could see the bigger woman was going to win the argument; none of the other women in the line was even close to her size. She looked like she could and would take on all of them, some seven or eight women and assorted children by 8:45 AM. The place opens at 9.

There are four dental centers on my block, three on my side of the street and one across the Street next to Little Caesar’s. One of them, this one,

was on the news once. The staff had forgotten a patient who’d been sedated in a chair and had all gone home, locking the hapless woman in. She’d come out of sedation in a darkened dentist’s office and called the police. The police in turned called the fire department who broke open the locks to the roll-top gate and then forced open the door to get the woman out. Beside the damage to the door, I believe the woman is suing them. Not the place to go if you need any work done on your teeth.

Back to the pecking order. When this country was young, the Irish were the poor and downtrodden, there were signs of “no Irish allowed” in certain places. They were considered dirty and stupid and useless, except as manual labor. The Irish worked hard to overcome this stigma, but they in turn treated the Blacks and Chinese with equal distain when it was their turn to be the low man.

When I was a child, there were very few Mexicans in New York, and I went through grade school to the taunts of “stupid Mexican” and “Frito Bandito.” This from my mostly Black and Puerto Rican schoolmates, who were passing on the tradition of low self-esteem.

Where I work the laborers are now mostly Ecuadorians, who have replaced the Poles and Mexicans as semi-skilled laborers. Let’s not forget the Poles, who fit in there somewhere between the Irish and the African-Americans in the labor history of New York.

I bet the Mexicans and the Poles try to piss on the Ecuadorians when they work on a job together.

I take a writing workshop at the JCC, I’ve done so for a number of years, and when I was new in the class I was awed my all the magazine editors and published writers in the class. I asked myself what I was doing there, I felt I didn’t belong. But I’d been accepted into the class on the strength of a writing sample, so maybe I wasn’t such a bad writer after all.  Now new people look up to me when they come into the class, I’ve moved up a notch despite my humble employment.

Last year, in the fall, we had a new young woman in the class. She was grossly overweight, and was writing about her struggles with food addiction. I’ll call her Sally. She writes really well, she’s funny and self-deprecating but with a touch of hope, and I like her. She is very pretty and would be super hot if she lost a hundred or so pounds. I can identify with her because I was that overweight at one time.

We both came back for the winter semester, and we’d developed a rapport and would sit across from each other and joke and make faces at each other during class. On the first day we were two of the first to arrive, and we greeted people we knew and welcomed newcomers.

Then a new woman came into the room. She was enormous, probably over 400 pounds on a five foot-three or so frame. She grunted each time she took a breath and a step, and a feeling of unease started growing in my gut. It was hard to look at her. 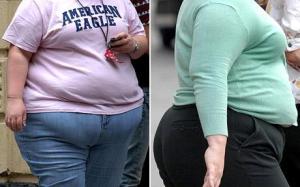 The new woman was bigger than this.

Sally looked at me and her eyes went wide as her jaw dropped.

“Somebody lower than me!” Was what I could gather from that look, since we said nothing to each other.

I guess low self-esteem is part of the human condition, and I inadvertently managed not to pass on too much of it to my son. I guess that’s all I can do, besides doing my best to treat others fairly and with kindness, despite who they are or what they look like.

I like to write, take things apart and put them back together. Also our cat Snookie, turtles, and my lovely wife Danusia.
View all posts by xaviertrevino →
This entry was posted in Uncategorized and tagged arrogance, humor, ignorance, labor, racism, self-esteem., writing. Bookmark the permalink.

2 Responses to The Pecking Order