Posted on October 5, 2013 by xaviertrevino 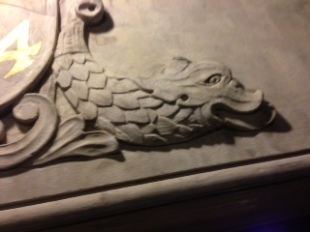 My friend Maggie Estep recently posted a couple of items about becoming a real estate agent, and I posted something about her having to learn to “lie real good.” She wrote back that that was in the 90’s.

Yesterday 2 apartments in our building went on the market, and within seconds of being posted on the website I started getting calls. Unfortunately the tenants were in the process of moving out of one and the other is still occupied.

Realtors celebrating how much money they made off you.

“I want to show 15D and 11D,” a woman demanded. I won’t mention the name of her company, they’d probably try to sue me; but I’ll say this: I’ve been dealing with their agents going on12 years, and it hasn’t been what I’d call a real pleasure. They are mostly women, and mostly Israeli, and mostly pushy and very creative with the truth.

I’ve heard things like “I just talked to the agent and he said it’s OK.” (To show.)

I call the agent and he says, no, it’s not OK to show.

Or, I just spoke with the super.

“In the Dominican republic? Really?”

Not to sound all peevish and spiteful towards ALL real estate agents, but give me a break.

Our company has some very specific rules, no pictures, no weekends without prior approval, no viewing without an escort, which means a staff member. But that doesn’t stop them from trying to take pictures or dragging people to the building unannounced on a weekend and trying to bully their way in.

“But they came all the way from China!”

On weekends there is only a doorman on duty, and you cannot leave your post to go show an apartment. So by showing up, they are putting the doorman on the spot.

I once told an agent I could loose my job if I let her up to an un-vacated apartment without an escort, she guaranteed I would not lose my job. Better to piss off a realtor than my boss, so I had to decline her guarantee.

Most are pretty cool, they call ahead, know how to take no for an answer, and treat me with respect and kindness. Once, one even brought me a coffee, from Starbucks, no less!

Another thing they do is promise tips, a percentage. I know that if anyone is going to see any money, it isn’t going to be me. So it’s just plain sleazy to do so. It’s almost as bad as the locksmiths who promise a commission for calling them, but that’s another blog post, TK.

I showed an apartment a couple of years ago, when I was the handyman. The realtor was a guy I’ve known for years, an Israeli guy who was always nice but not pushy nice, like the ones who approach you with an aggressive outstretched hand like you’re some long- lost loaded uncle hemorrhaging money.

We were in the apartment with his client, and he said:

“I haven’t seen you in a while, you do this now?” Referring to my different job.

“I rented an apartment on the 10th floor, you showed it to us, remember?”

I did remember, a woman took it; it was one of the few times someone I showed to actually rented the apartment.

He took out his wallet, extracted a $20 bill and handed it to me.

“This is for that time.”

“Thanks, I said.” He never made any promises, I never asked him for anything; I was just doing my job. I’m always professional when showing, I answer all questions, explain what everything is for, know which way the windows are facing and smile. Nobody wants to live in a building with sullen staff members.

Well, I hope they teach Maggie to be nice and not pushy in her real estate classes. You can probably read about it on her blog by clicking here: Machine Guns and Underpants

A guy came in one day with a woman from Texas in tow, looking to show an apartment. He hadn’t called or anything, and the floor of this unit had just been polyurethaned. I told him so, and he became incensed that I wouldn’t let him up. He demanded to see the super. I called the super, who came down and said, “the floor is wet, and you can’t go up.”

“The doorman could have told me that!” The man said.

The woman from Texas who’d just witnessed the whole scene said to him:

“You just can’t seem to get anything right today, can you?”

That was a good moment.

I like to write, take things apart and put them back together. Also our cat Snookie, turtles, and my lovely wife Danusia.
View all posts by xaviertrevino →
This entry was posted in Uncategorized and tagged doormen, humor, Maggie Estep, real estate rental market, realtors, renting in NYC. Bookmark the permalink.