THIS IS AN UNNECESSARY ALERT

Posted on September 3, 2013 by xaviertrevino

Yesterday, because of the sudden thunderstorms and flash flooding that never materialized for Manhattan and Brooklyn my cell phone kept going off with a really annoying alarm warning me of impending doom. The audio alarm, a shrill, insistent vibration reminiscent of the “This is only a test” NORAD warnings I used to hear as a kid on TV kept going off followed by a text warning on my cell phone screen that disappeared when I unlocked my phone to read it. That gave me the idea for this post.

I was going to save the warning to use as a graphic for this, but each time I unlocked the phone it was gone. Then I had a better idea, get a screenshot, I’ve taken dozens of screenshot by accident, now was the time to do it for real.

The last alert came about 3PM as I stood on the corner of 14th Street and 9th Avenue waiting for the bus with the hot sun streaming down on me, with no sign of the heavy downpours bringing 2 inches of rain per hour that prompted the flash flood warning on my phone. I was ready for the next warning to get that screenshot, but that was the last one, I’d missed my chance. 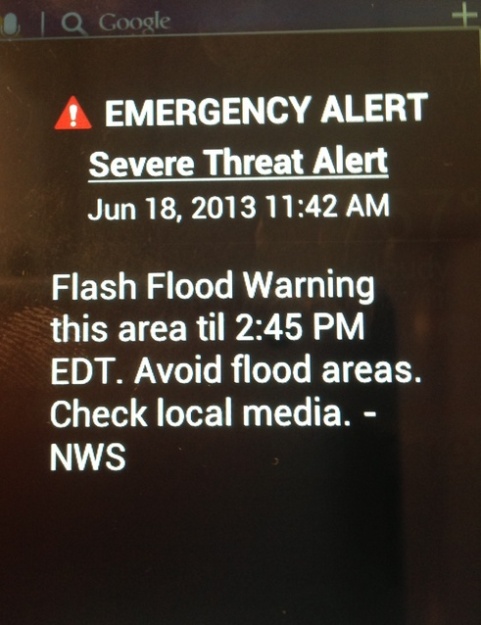 But here is a reasonable facsimile I found on the Internet.

The first time I heard one of these warnings was in the beginning of the summer. It was the middle of the night; I was fast asleep when the shrill insistent vibration suddenly erupted from the lovely Danusia’s iPhone on her nightstand. The both of us sat up wondering what the hell it was. I always turn my phone off at night, so we were spared a double dose of irritation.

This is only a drill.

I remember when I was a kid, there was a day everybody was supposed to stay inside and hide for 15 minutes, and I remember looking at the posters on the subway warning everyone to comply with the drill under penalty of arrest. The whole city was supposed to come to a standstill and hide for 15 minutes on that day. It was known as Operation Alert, and though it happened once a year, I only remember one. I guess it was the one that happened in the spring of 1961, when I was six. I anticipated it with both fear and excitement; I was going to take part in the Cold War against the dreaded Communists. The day came and I found myself walking down the street with my father, who could give a rat’s ass for government drills or Communists. The sirens sounded and all good citizens scurried for cover, except for us, the winos and the street people arrayed along Atlantic Avenue where we lived.

“Papa, we have to take cover!” I pleaded.

“Shut up and keep walking, kid, it’s got nothing to do with us.”

It was better advice than I thought at the time, terrified that we would be arrested and thrown in jail, or worse, roasted alive by the radiation of a Soviet H-Bomb. 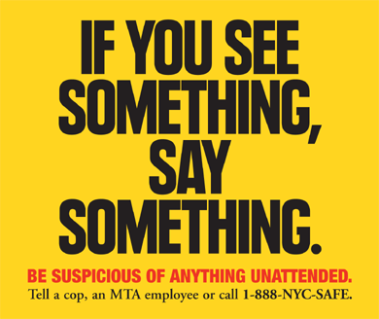 Those subway signs are echoed today by the If you see something signs, those ubiquitous reminders to be vigilant against our enemies, just like the Operation Alert signs and Duck and Cover drills did so many years ago. And the same way Operation Alert and Duck and Cover have gone by the wayside, one day the powers that be will decide that it is too expensive to maintain the See Something campaign and that will go by the wayside too. Now if I can only get rid of those alerts on my phone…

I like to write, take things apart and put them back together. Also our cat Snookie, turtles, and my lovely wife Danusia.
View all posts by xaviertrevino →
This entry was posted in Uncategorized and tagged alarms, cell phone alerts, cold war, fear, humor, sirens. Bookmark the permalink.