Elmore Leonard died last Tuesday, and since I was on vacation and not watching the nightly news (or the morning news for that matter) I didn’t find out until I saw Maggie Estep’s blogpost about it the next day, and she mentioned Leonard’s 10 rules about writing essay, and how the rules had influenced her writing.

I haven’t read the 10 rules book, but I did read 27 of his books, and I must admit, besides being highly entertaining, they were also a good influence on my own writing. 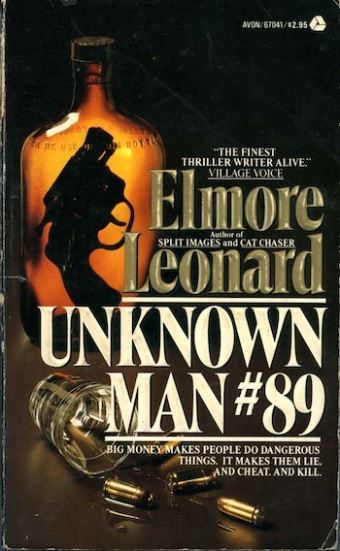 This was the cover on the copy I had

There was a great character in the book called Raymond, pronounced RAY-mond, according to the book, and he was some kind of backwoods Cajun killer working for a guy named Mr. Perez (pronounced Pe-REZ) and they were both in Detroit looking for the wife of the unknown man. A lot of their scenes involved the two of them discussing how close to home the “Authentic” Cajun cooking was in Detroit. Raymond went out to eat a lot; Mr. Perez stayed in his room and ordered in.

At one point, Raymond chases our hero (his name I forgot) through the streets of downtown Detroit firing a shotgun at him the whole time, and our hero took to referring to Raymond as the “Swamp Creature.” When I read that I was hooked, you can’t beat that for a description. I was in the army with a couple of swamp creatures, and Dutch knew what he was talking about.

There were no more Elmore Leonard books in the library, at least not crime ones; there were some westerns, but I’m not a great fan of westerns. So I didn’t read any of his other books until four years later, when I was out of the army and living on the Lower East Side. That book was Cat Chaser, and I loved what I got to read of it. In Cat Chaser, the hero is a Marine in the beginning of the book, and deployed to the Dominican Republic in 1965 to do whatever it was the Marines were sent to do. Marines are not Army, but military, so it was close enough for me. I could identify with the character.

Cat Chaser was this guy’s radio call sign, and he meets and falls in love with a beautiful Dominican woman during his brief visit.

I was working at a shoe store out in Queens at the time, and read on the way there and on the way home, a trip that averaged an hour on the F train. One morning, I was reading the book while sitting on the little concrete seat at the Second Avenue station waiting for the F train. The train pulled in, and I was so engrossed in the book I waited for the last second to jump up and board. The train doors closed, and I looked at the seat I’d been sitting on, and there was a book lying there, and it said Cat Chaser on the cover. That’s the last time I saw the book.

I must admit, I wasn’t in my right mind at the time, and I was prone to leaving half read books on train stations or having them stolen by my friends.

One of the things about Leonard’s characters was that they reminded me of some of my friends, like the Corsican Sous-Chef who copped my copy of James Jones’ Go To The Widow Maker, another unfinished book in my history. I know it was him because he was the only one who “dropped by” that day.

There are plenty of books I’ve started and not finished for one reason or another, but these two were definite “finishers.”

When I first saw a picture of Dutch I thought he looked remarkably like Michael O’Donahue, another good writer and a sort of friend of mine. O’Donahue once gave me an autographed copy of Charles Bukowski’s Hollywood, and I still have it around somewhere. But I haven’t gotten around to reading it.

So, farewell, Dutch, I’ll miss you, but there are still a bunch of unread gems waiting for me to get around to. And if anyone has a spare copy of Cat Chaser or Go To The Widow maker, drop me a line.

I like to write, take things apart and put them back together. Also our cat Snookie, turtles, and my lovely wife Danusia.
View all posts by xaviertrevino →
This entry was posted in Uncategorized and tagged Elmore Leonard, humor, influences, literature, Michael O'Donahue, writing. Bookmark the permalink.

1 Response to Farewell To Dutch