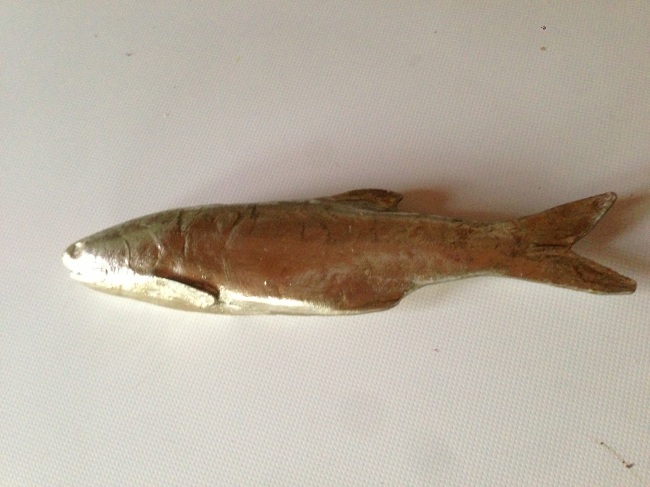 When I was 16 I worked at a shoe store, Bloom’s Shoe Gallery on Sixth Ave. just down the block from the Waverley Theater. Three siblings, Sadie, Joe, and Milt Bloom owned it. They were all old, and each had a peculiar quirk. Sadie was the eldest, probably 70, and had a hairy face and walked as if her thighs were glued together to the knee. Milt was the youngest, but the boss; and he thought he was Groucho Marx. Joe was in the middle and kind of dense, I was told by a coworker to always go to Joe when I had a sale to ring up because he was easily distracted and I could confuse him enough to get him to give me the wrong change, and keep the difference. Every time Joe heard a fire truck go by siren blaring Joe would drop everything to run to the door and watch it.

It’s the same with aircraft and me. Every time I hear any kind of aircraft fly by I have to look up and if possible, identify what type of aircraft it is.

As a child, aircraft were what I loved to draw the most. I had drawings of all kinds of planes, and there was a hobby shop nearby that I would spend hours in front of looking at the model planes hanging in the window. I watched movies about planes and pilots, and wondered what it would be like to fly, to look down from high above.

As I grew older, the love increased, but I developed a fear, a fear of heights, and a fear of flying. It was a paralyzing, visceral fear that I hated having. I refused to go on roofs or fire escapes, and traveling over bridges was a challenge, I could not look down.

But I still looked up at planes, and wished I could be in one.

That opportunity came at the age of 25, when I was working at The Albany Skydiving Center in Duanesburg, NY. To say I was terrified would be an understatement, but curiosity and a threat to be sent back to Brooklyn trumped fear and I boarded a Cessna 206 that had the door and seats removed for skydivers. I sat on the floor behind the pilot, wearing a pilot’s reserve parachute with my legs spread open, so the next guy could lean into my lap. He and five other jumpers were crammed into the small plane like this, only the jumpmaster stood, crouched, really, over everyone else looking for the drop zone. It took 20 minutes to reach 15,000 feet, and when they did they all somehow went out of the door at once. The plane seemed to jump up into the sky from the sudden loss of a thousand pounds. I thought I would toss my cookies, but it didn’t happen.

That’s the remarkable thing- I’ve flown hundreds of times since then, in sometimes really bad conditions that cause the plane drop and pitch and roll with sickening suddenness; but I’ve never lost my lunch. I’ve seen plenty of others do it, but it’s never happened to me.

This week I went up in the co-pilot’s seat for the first time, and again, all I could think up in the days and hours leading up to the flight was “I hope we don’t go down.” I imagined the engine quitting suddenly, looking up to see a giant jet bearing down on us, a sudden storm appearing out of nowhere to swallow us up whole…

But I was also excited. I’d always wondered what the view from the cockpit would be like.

It was a Cessna 172 Skyhawk; similar to the 182 I’d jumped out of on my first parachute jump. The pilot was my friend Shari, someone I’ve known for almost 30 years. She’s been flying for the past 10 or so years, I think, we lost touch for a while so I can’t be sure. But she has mentioned it to me for sometime now, that one day she would take me up. And that day had come.

Danusia and I drove out to the Mattituck airport the other morning to wait for Shari, and the Mattituck airport is a 2,000-foot tarmac field with a few small planes and a helicopter parked on the apron. No tower or field control or anything. We watched as a small red and white plane flashed overhead and landed on the field out of sight from where we stood. We listened as the plane turned around and taxied over to us. It was Shari.

Shari shut down the engine and climbed down from the cockpit. She explained the flight to us, a hop over to a field in Rhode Island for gas, then on to our destination, Block Island for lunch.

We got on the plane, Shari showed us how to strap in, and we all put our head sets on so we could communicate without yelling at each other at the top of our lungs, the way I had to on those other small aircraft flights. Shari turned the key in the ignition, the prop turned over, and after taxiing back to the runway we were off!

We climbed to 2800 feet and headed north to RI. I looked down at the North Fork, trying to spot where we were staying but it was impossible. We flew over Robin’s Island and Shelter Island, then over the sound. 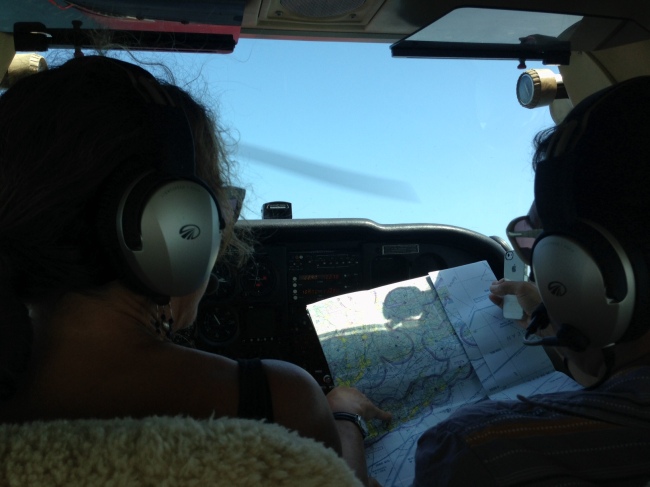 I was glad I had on polarized sunglasses, as it was clear and sunny, a little hazy. I spotted the field we were going to land on for gas, and Shari bounced the plane once on the landing.

“That was a shitty landing.” She said.

“Any landing you can walk away from is a good landing.” I said.

We gassed up and when Shari went to the office to pay Danusia and I explored a hangar full of unusual planes, and an old Korean War helicopter. Shari reappeared and we climbed back into the 172 for the next leg of our journey.

As we approached Block Island Shari had me take the yoke, and talked me through a 90° turn for our landing run. I’m glad I didn’t put the plane into a steep dive and land us in the Atlantic.

We landed and walked the 30 minutes into downtown Block Island, which Danusia calls “Black Island” because in Polish O is A and vice-versa.

I wanted a souvenir, but I didn’t want a t-shirt that said “Block Island.” I spotted a nice silver fish suitable for framing in a gift store, and after Danusia talked me out of it, Shari bought it for me as a sort of belated birthday gift. It was $18, and I call it the $18 fish. I’m going to mount it and put it on our kitchen wall when we get back to Brooklyn.

We had lunch; we walked around, talked, swapped flying stories and eventually headed back to the airstrip. We strapped in and flew the slow, uneventful but breathtaking last leg back to Mattituck.

We flew over Montauk, where Shari has a house, back over Shelter Island and the Peconic bay, and landed safely in Mattituck. We said our goodbyes and Danusia and I watched Shari take off into the evening sun. It was great flying around, and even greater to take the yoke and do a 90° turn. I can say I flew a plane now, even if it was for only a minute or so. But it sure was fun. And scary.

I like to write, take things apart and put them back together. Also our cat Snookie, turtles, and my lovely wife Danusia.
View all posts by xaviertrevino →
This entry was posted in Uncategorized and tagged aircraft, Block Island, fear of flying, flying, friendship, general aviation, humor, Long Island, relationships. Bookmark the permalink.

6 Responses to Easily Distracted By Aircraft