Posted on April 9, 2013 by xaviertrevino

My Eastern Box Turtle Tia, died the weekend before last. I have no idea how old she was, but I’d had her for twenty four or so years. Tia is short for “Tortilla“, which is what my then two-year old son had chosen to call her. I had just referred to her as “the turtle” as did my then wife Kathy.

I got Tia from an old Polish couple who lived on Norman Avenue around the corner from our home on Guernsey Street in Greenpoint, Brooklyn. It was 1988 and Kathy and I had moved from the Lower East side inn Manhattan after getting a buyout in those early days of city Gentrification. We would come up the block from shopping, or whatever, headed home with our son Javier in his stroller and the old couple would always be sitting on the stoop in comfortable wooden chairs, the man always with an intricately sculpted and painted beer stein with a pewter lid in one hand,the wife in a housedress and shawl on chillier days.

I think it was the woman who always waved to us, admiring our “beautiful baby” in the stroller. Eventually we would stop and chat with them, they looked like they’s been married quite awhile and appreciated different people to talk to, and beside, we were new to the neighborhood and they were a good  source of information about stores in the area.

Soon after we met, I noticed that there would be a third family member enjoying the sun on Norman Avenue, a small box turtle that sat at the woman’s feet. “Wow, a turtle!’ I said.

“In the back yard, we found turtle in the back yard. There’s more.” That was interesting, backyard turtles in Brooklyn. I had a turtle as a kid, along with two frogs, a gerbil, and a hamster, not necessarily all at the same time. But I think I always liked the turtle the best.

“Potatoes?” I didn’t think turtles would eat potatoes, I thought they went for worms and bugs and grasshoppers. But I guess if someone gives you potatoes, you eat them.

“No! The turtle!” The woman laughed.

“I can have the turtle?”

“Sure, there’s more in the backyard.”

“I only want this one.” And that’s how I acquired Tia.

We never fed her potatoes. Kathy knew more about reptiles than I did, and she said,

“They gotta have meat.” And so she would make little balls of raw hamburger, and we would freeze some, and feed the turtle the rest. The turtle loved the hamburger meat, and ate voraciously. I went to the library and got out a few books on turtles, and discovered that Tia was a female, so when Javier named her Tortilla, the name was appropriate, as female names have to end in an A in Spanish.

Soon there were more turtles. One day I came home and there were two water turtles in a bucket. One was a young Red-Eared Slider, the kind you see in the turtle pond in Central Park. The other was a baby African painted turtle. Javier would eventually name them Princess Sally and Mickey.

“Why did you get more turtles?” I asked Kathy.

“They were free. I rescued them; they’re both sick, and the pet store guy was going to euthanize them. So I brought them home.”

Princess Sally, the slider, had shell rot. Micky, the Painted turtle, had a big lump on the side of his head, an infection filled with solidifying puss. They were probably going to die. We read up on the shell rot, Kathy had gotten some medication to put on it, but you had to remove the affected scutes (scutes are the little panels that make up a turtle’s shell) and Kathy was very timid about doing it. I took over and aggressively scraped off scutes and applied ointment.

The painted turtle was a lot tougher, I started to apply hydrogen peroxide to the turtle’s head and he would tuck in. It didn’t seem to help much, considering that when the turtle went back in his tank (We got a tank for them right away) the peroxide would wash away. I thought  of a better idea, squeeze out the puss and force some peroxide in with a q-tip. This was hard to do to an animal whose instinct when threatened pulls it’s head into it’s shell. Together Kathy and I devised a plan where she would hold the turtle in one hand while I enticed it with a morsel of food, and when he pulled his head out for the food I grabbed it between my fingers and held it still while I pulled rotting stuff from inside the turtle’s head with a pair of tweezers. Mickey would struggle and pull, especially when I applied the hydrogen peroxide, but after a couple of weeks of every other day treatment, his head was normal sized and the hole in his head closed up. Ditto for Sally, the shell rot was gone and all she had to show for it was a discolored scar on her upper shell.

Kathy brought home another box, a big male Javier dubbed “Fatty” Then one day, as we were leaving for work, we heard the dog next door barking furiously at something on our side of the backyard fence.We looked out the window, and there, barely inches from the chain link fence, was another box turtle. Of course, a Brooklyn backyard box turtle!

“I hope the dog doesn’t get it,” Kathy remarked.

“He can’t get over the fence.”

When we got home from work that evening, Kathy looked outside the back window.

“Shit! He’s almost through!” She said as she ran past me, out the door, and down to the basement. I peered out of the window just in time to see Kathy emerge from the basement door and snatch the turtle away from the dog, who’d dug a hole underneath the fence and had just about reached the turtle, who hadn’t moved all day. The dog howled in frustration, launching himself at the fence, desperately trying to rescue his prize. I smiled, I never liked that dog to begin with. “Tough shit, buddy” I muttered to the dog.

This turtle I can never remember the name of. It was another male, and he was the most aggressive and meanest of them all. He should have been called meanie. At that time, we let the boxes run free on the floor. Their excretions were minimal and easy to clean up, they normally hid (I once found Tia in a shoe I was trying to put my foot in) and came out when they were hungry, or to bask in the sun so they could digest. But the first thing meanie did was attack the others, I swear he did something to Tia which resulted in a prolapsed rectum (I’d never even heard of the term before) that she had till she died last week. So we had to put them all in terrariums, lest they fight to the death, which is what boxes do in the wild over territory.

Meanie also had another quirk- if he saw a bare foot he would run over and bite your toes. Tia bit my toe once, but only to get my attention that she was hungry. This one just bit for the sake of biting. We had a chair, an old chair with carved lion’s feet on the legs, and when the turtle wasn’t biting toes, he was busy gnawing at the lion’s feet. A foot fetish turtle! Fatty’s quirk was pushing things around that were in his way. His favorite was an old bolster that we kept on the couch; I I put it on the floor Fatty would run over and push the thing across the floor with his nose till it hit the opposite wall. I would pick up the turtle and bolster, put them both down, and he would do it over and over again. Strange, but entertaining. Javier loved all of this stuff and couldn’t get enough of the turtles.

We trained the water turtles to eat out of our hands and gave the boxes strawberries and insect larve; but what they loved the most was the hamburger meat.

When Javier was twelve Kathy asked for a divorce. She’d been diagnosed with breast cancer, and was scared enough to think she was missing something in life that I couldn’t possibly give her, and she needed to find that, without me. I had little choice bu to agree, how do you argue with someone who thinks they are going to die soon? I let her have everything, the apartment, the retirement fund, primary custody of Javier. The only thing I wanted was Tia, who I considered to be my turtle, since that’s the only one I’d brought home. I’d grown to love them all, but Tia had a special place in my heart. Kathy agreed, and Tia has been my constant companion since. I stared getting turtle tattoos around that time, I think it was a desperate effort to hold on to Kathy’s affections. She at some point before the diagnosis had come home one day and announced “I want to be called the turtle lady”, and my thinking was if I was “the turtle man”, we were destined to be together; but it didn’t work out that way. She remarried soon after our divorce, I discovered she’d had this in mind for awhile, this other man, but the cancer had set everything into motion. They moved to Santa Fe in 2005, and I asked Javier if they were taking the turtles with them.

“Well, Princess Sally and Micky we put in the pond in Van Cortland Park, and mom let Fatty and Meanie loose in the woods.” I though they’d never survive, after al those years of captivity, but there was nothing I could do.

After getting the tattoos and telling people I had a turtle for a pet I started getting turtle presents. I have a turtle pen, turtle candles, turtle soap, a jade turtle bracelet, and various birthday cards with turtles on them.

I’ve remarried too, to a wonderful woman, Danusia, who was the one who discovered Tia had died. She made a nice little casket for Tia, a square wicker box with a top filled with yellow tissue paper and a single lilly. We took Tia to the east river that Sunday and gave her a burial at sea. It’s nice to be loved. 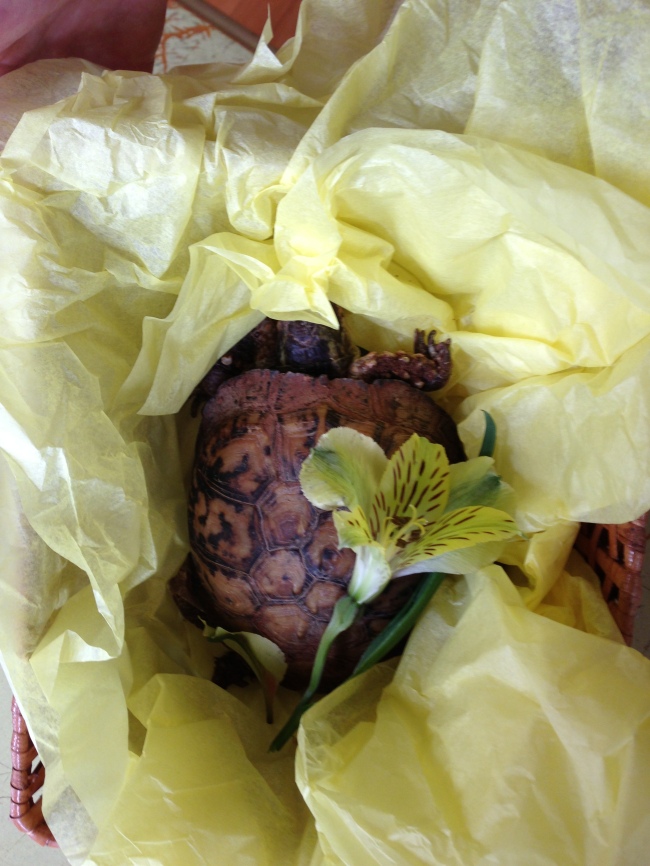 I like to write, take things apart and put them back together. Also our cat Snookie, turtles, and my lovely wife Danusia.
View all posts by xaviertrevino →
This entry was posted in Relationships and tagged breast cancer, divorce, marriage, pets, relationships, turtles. Bookmark the permalink.