Posted on April 7, 2013 by xaviertrevino

The cat sniffed the edge of the pooper-scooper with the delicacy of a sommelier, and satisfied, made the cat-grimace cats make when they smell something pleasurable. The first time I ever saw that was when a friends cat spent some time sniffing at my sneakers many years ago, and I thought it was weird then and I still think its weird now.

“Does that smell good, kitty? Are you fascinated by the smell of your own poop?” I asked. For a reply the cat walked over to her scratching post and began to methodically pull bits of carpeting off of it with her claws.

The cats name is Kiwi- I must mention that for the sake of matrimonial harmony, and Kiwi is my wife’s cat. I’m supposed to say it’s our cat, but I have a hard time possessing a creature that honestly kinda grosses me out. (Here is where marital harmony walks a thin line)

The grimacing thing makes me queasy- I don’t like to think of animal’s sexual proclivities, considering the amount of times dogs have sniffed my crotch or tried to hump my leg, and I worry some animal will surrender to abandon on me or some article of my clothing. When we first got Kiwi she peed all over the place, we ended up throwing out two couches, no, they were both love seats, but they had to go after the kitty anointed them with her own special odor. The clothing she pissed on, a pair of my pants,  one of Danusia’s boots, were washed and cleaned and I learned never to leave anything lying on the floor or on a chair seat. Ditto for getting cat hair on it, as the cat always tries to spread around her DNA by all means necessary.

Kiwi replaced Banana, my wife’s first cat, who died almost two years ago. She was sixteen or so, and we were cat-free for a short period. I had hopes, but in my heart I knew Danusia would eventually get another cat. We went to England that summer, and we had to find someone to feed the turtle, but when we got back one of the first things she said to me was “I’m getting another cat”, with a look of fierce determination on her face, daring me to argue about it. I prepared to meet another cat.

So we met Kiwi, another fruit name, just a coincidence since this one already had a name.

“You can call the cat whatever you want”, the guy at the pet rescue place or whatever he likes to call it, the sign says “T-shirts printed” on the front of the store but as you enter the shop it is filled with the sound of small dogs barking and cats restlessly jumping around in their small cages. There are also some birds and reptiles in various receptacles. The smell is overpowering. The guy, a tall thin bald lower east side fixture whose name I can never remember tells me we can only adopt an adult cat if we only want one. Kittens come in pairs only, and one cat at a time is about as much as I can handle.

“Why can’t we get just one kitten?” I ask. He hands me a printed sheet and says, “read this, it explains why.”

The gist of it says cats are social creatures and if you raise a kitten by itself you will subject it to incredible loneliness while you are at work and this has serious consequences on the cat’s psyche. I could care less abut a cat’s psyche but the guy wasn’t giving us a kitten, he cared. He didn’t care much about human’s comfort, that much was obvious from the overpowering smell of the place and the hard-ass attitude he was giving me.

The only cat I liked was a small female calico in a cage. I like her because she sat quietly, didn’t pace or claw at the walls of the cage like others. “What about that one? Is it old enough?”

“This is Kiwi, she is two years old, so yes, you can take her.” He pulled out her paperwork and told us she’d been adopted and returned once already. “She had some emotional problems, and all her hair fell out, so they brought her back.” The cat looked pretty hairy to me, so I guessed that whatever emotional problems she had were resolved.

The guy opened the cage and pulled out the cat, handing her to Danusia. For her it was love at first sight. The cat was a little stiff in her arms, and the guy said “scared.” After some of Danusia’s loving caresses, the cat seemed to relax, and it was a done deal. I went outside to wait while Danusia filled out the paperwork and gave the guy his “donation” of $100. I wondered if he paid taxes.

So, Kiwi came home with us, in the fall of 2011. The first night she was here she caught a mouse. I remember Danusia had gone out somewhere and I was sitting on one of the not yet pissed on yet love seats watching TV when out of the corner of my eye I noticed the cat was pouncing on something. Then the cat would spring back, crouch in a stalking position, and pounce again, at the same spot. Then the cat sat up and started to delicately bat at something. I got up to investigate, and the cat was gently pushing at a dead mouse with her paw, trying to get it to jump up and run again. I reached down and picked up the mouse by its lifeless little tail. The cat wailed in frustration.

“It’s dead, cat. It can’t play anymore.” I put the mouse in a plastic bag, put on shoes and a hoodie and took the dead mouse downstairs and put it in a city garbage can down the block. I didn’t want to take the chance that the cat would dig it out of the garbage can to play with some more.

I was worried about what the cat might do to my box turtle Tia. The other cat, Banana, was so old when they met she didn’t even show any interest in the turtle. When we put Tia on the floor with Kiwi she tucked into her shell and buttoned up tight, and Kiwi lost interest immediately. She did however, find it interesting to pee and shit in the turtle’s terrarium. I had to buy a wire mesh cover for Tia’s terrarium.

With the exception of my ex-wife just about every woman I’ve ever dated had a cat. None had dogs, but I think I sub-consciously avoided women with dogs, you can’t compete for a woman’s affection with a dog. I remember one woman kept the cat’s litter box in the bed room, and once, when we were in bed the cat, named Francis, what a name for a cat, Francis, took a big smelly crap, and walked out of the room, leaving us with his gift. She made no move to scoop up the shit or air out the smell, I think the relationship ended right there and then, at least in the sense that I knew I would never move in with her, much less marry her. When I first started dating Danusia, Banana would hide in the closet and not come out. “She doesn’t like guys”, Danusia said. “That’s OK, I don’t like cats” I replied. Eventually the cat came out and we got used to each other. We had an adversarial relationship, Banana and I, due to Banana’s obsession with water. The cat loved to play in water and would even get in the shower with Danusia. I drew the line at that, and would close the bathroom door, much to the cat’s dismay. She would sit outside the bathroom door and yowl until I came out, and she ran in to lick the water off the bottom of the bathtub. “That’s got soap in it, dumb-ass”, I would say to the cat, who would ignore me and keep on licking. Ugh.

When Banana died, and I knew she was dying, I knew for a couple of months before she went- I have to admit I did shed a tear or two. I think it was mostly sympathetic crying since Danusia was doing so much of it, she’d had Banana for a long time and was her one constant emotional connection, and I understood and respected that, and reacted accordingly emotionally. But the ting I learned was that if I want to be in a relationship, I have to accept the other’s emotional needs, which might include having a cat. I remember once my brother complaining about a girlfriend’s cat, and I said, “I don’t think this is about the cat.”

I do my best to keep the cat off of the dinner table, cat hair in my  food is totally unacceptable, and as I said, I keep my clothing out of the cat’s reach. I hate it when i interact with a person and their clothing is covered with cat hair- so I make sure it doesn’t happen to me. I feed the cat when I have to, and clean out the litter box whenever the kitty takes a dump and I’m there to smell it. Danusia does this also, and I noticed that when we first started dating and had separate apartments, a big diference from the woman who did not clean the litter box. I still have territorial disputes with Kiwi, but we have a new couch and so far she hasn’t pissed on it. I don’t think she’s pissed n anything for awhile, come to think of it. I have learned to play with the cat, and on occasion, even pet her and pick her up; usually when Danusia is away working. Danusia sees this, and says, “See, you love Kiwi!”

Not really; let’s just say I’ve grown fond of her. 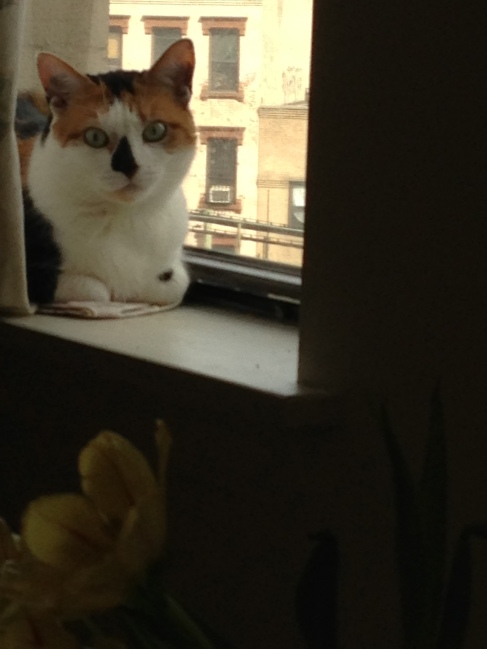 I like to write, take things apart and put them back together. Also our cat Snookie, turtles, and my lovely wife Danusia.
View all posts by xaviertrevino →
This entry was posted in Uncategorized and tagged cats, living together, marriage, relationships. Bookmark the permalink.