Posted on August 5, 2017 by xaviertrevino

As some of you have read before Danusia and I are members of the community garden up the block, the Garden of Hope. There is also the Convent Avenue Garden just up the block at the foot of St. Nicholas Avenue. And of course the garden of cars in the middle of the two. 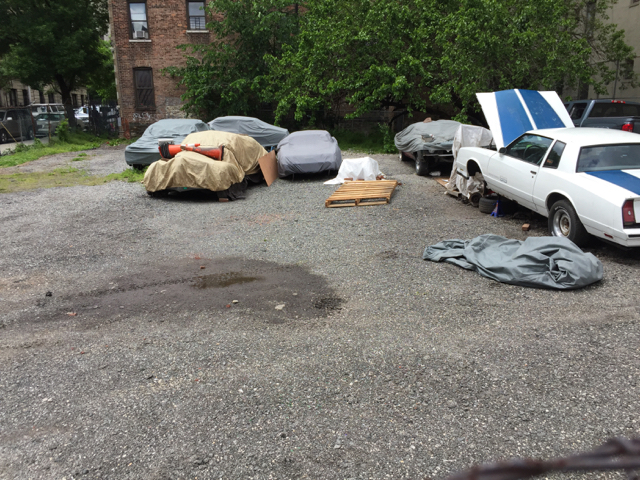 The garden of cars.

Our garden is huge, almost the length of the block between Amsterdam and St. Nicholas. Convent Avenue garden is about a quarter the size of ours, occupying the corner formed by the intersection of St. Nicholas, 151st Street, and the foot of Convent Avenue. It’s a beautiful garden, a wrought iron fenced triangle with years old wisteria vines covering most of the fence. It’s lush and green with spots of bright reds, yellows, violets, and whites from the multitude of flowers within, and the rosebushes that grow along the borders of most of the garden.
There is one entrance at the corner of 151st and St. Nicholas Avenue. Just inside of the entrance, at the foot of an entry path bordered by the aforementioned rosebushes sit three chairs side by side. 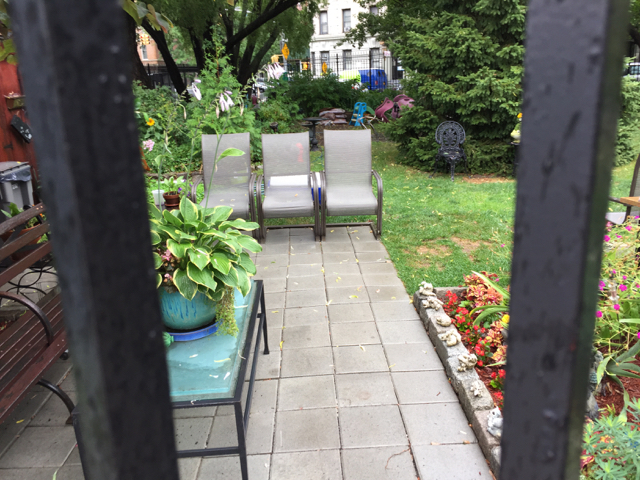 When we first moved into the neighborhood Danusia walked into the garden one day, after all the gate was open and approached the three elderly women who occupied the three chairs, and told them what a beautiful garden they had. Danusia’s like that, very open and generous. She told me she was met with suspicious stares. They were clearly not welcoming.
So now every time I pass the garden and see the three women sitting there I think of Charon’s dog Cerberus sitting there guarding the garden from outsiders.
Our garden, on the other hand has a big welcome sign on the front gate. Juan, the garden president usually opens the garden at 10AM and then comes back to close it at 6PM. Last Saturday Juan was out of town and I volunteered to do the closing duties.

Hope garden is so big it has two gates, the main one on 152nd near the Northeast corner of Amsterdam Avenue and another gate on 153rd Street near the Northwest corner of St. Nicholas. It’s also so big it’s a lot harder to care for, and we have a lot of patches of “just plain dirt,” as Juan calls it. We are looking for a donation of pavers to at least cover the pathways. And sod for most of the other open bare areas.
We’ve got two peach trees, a whole bunch of mulberry trees, oaks, evergreens, and tons of wild weed bushes everywhere. Very lush in the center of the garden, and very shady. We have a half- finished gazebo. We have a stage that needs work. We have 18 3×5 plots where most of us grow food. Danusia and I have a tomato plant, three lettuces, a habanero plant, some mint and oregano. Danusia planted some flowers but they died. 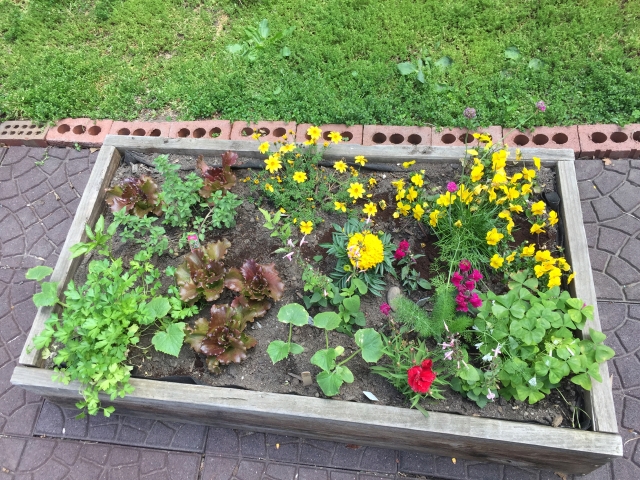 Most of the other gardeners opted for just produce, and there are plenty of collard greens, tomatoes and eggplants to go around.
We had some strawberry bushes and the strawberries were delicious but nobody harvested them and most ended up on the ground or eaten by squirrels. They love strawberries. And peaches. I keep finding unripe peaches on the ground with a few bites taken out of them. One of the peach trees is dead and the other had leaf curl which was being bravely battled against by my friend John, the one with the heart problem.
John’s in the hospital, having undergone some major open-heart surgery last week. But before he went in he showed me the spray we’re supposed to be using on the leaf curl. I haven’t had the chance to spray the tree since then, though.
I was happy when I met John, a new friend. He’s an artist and a teacher, and we spoke the same language. I have a hard enough time meeting people, especially men that I like and respect and want to be actual friends with as it is, so meeting him and befriending him was really welcome.
But when I visited him in the hospital the other day I learned that not only does he have a heart problem but metastasized cancer. Finding that out was pretty unpleasant, a real letdown.
But if I could find a friend in John it means I am capable of making other friends, I just have to let my guard down some, leash up the Cerberus inside of me.

Our garden isn’t a pretty as the Convent Avenue garden, but defiantly more nurturing and nutritious.
Usually when I go to meet john in the garden I’ll find him sitting on one of the benches under the big mulberry tree near the entrance, eyes closed and arms extended in a meditation pose, fingers curled in a gian mudra.
I’m gonna have to try it one day, judging by the way he let it drop about the metastasized cancer like it was only one more thing think about.

I like to write, take things apart and put them back together. Also our cat Snookie, turtles, and my lovely wife Danusia.
View all posts by xaviertrevino →
This entry was posted in gentrification, New york, Uncategorized and tagged blogging, cancer, city gardens, food, friendship, gardening, Harlem, inspiration, Life, meditation. Bookmark the permalink.