Yesterday I took my last driving class with Mr. No. I’m taking the test in a few hours.
I haven’t written about my progress, and not because it hasn’t been interesting, but because I’ve been busy with my new job.
Last week, during my next to last class, I was waiting for a light and glanced over at Mr. No because out of the corner of my eye his head seemed to be drooping. He was nodding out in his seat, possibly hung-over.
His eyes would open when I stepped on the gas and the car started to move. He kept nodding out at lights, and the one time I caught him doing it while I was moving, I made sure to step on the brake hard to give him a little jolt. He did not complain about my stepping on the brake hard. 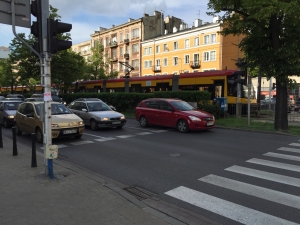 We’ve been practicing three-point turns and parallel parking, and if he was a better communicator it would have been easier, but when you do things like say,
“Pull over here,” without any explanation, it gets a little frustrating and I end up doing the wrong thing, and he gets all bent out of shape.
“No, no! K-turn! K-turn!”
“Sorry, I thought you wanted to go to the bathroom again.”
There is a playground on East Broadway near Grand Street that Mr. No likes to pee in. The first time he made me pull over to the curb, I think it was the first time I parallel parked and he got out of the car. I started to get out too, thinking we were going to check how close to the curb I’d gotten. I can’t tell how close because I’m in the driver’s seat. But that was not the case.
“Stay in car! Wait.” 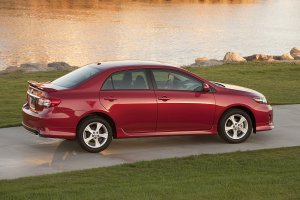 That was the day it got warm and I took the opportunity to take off my leather jacket while he was peeing. I knew he’d gone to the bathroom because I saw him coming out of the playground bathroom in the rear view mirror.
The next time he asked me to pull over in front of the playground I knew, but that time he said, “Pee-pee” as he got out. Made me think of pee-pee dicky, for any Putney Swope fans out there.
Mr. No smokes, and I think that’s one of the reasons he gets a little antsy towards the end of each lesson, grabbing the wheel or yelling, “go, go, go,” when there’s a wall of people crossing Chrystie street in front of me. He’s got to have that cigarette. I even thought of changing his name to Mr. Gogo after that.
Another thing he did last week was try to make a phone call as I was driving.
That would be fine, except he’s got his phone plugged into the car and he has to press a button on the steering wheel to activate the phone. All while I am driving with both hands on the wheel.
It’s bad enough when someone grabs the wheel while you are driving, but it’s positively annoying when someone is trying to press a button on the wheel while you are making a turn. I should have slapped his hand away.
We got through the last lesson without a pee-pee run or him grabbing the wheel, but I almost ran a red light and he stepped on the brake.
“Pay attention! Look at the light!” I had been making a turn and was concentrating on looking for pedestrians and did not look at the light. But he kept his hands off the wheel when I turned back onto Eldridge Street from Grand on the way back to the start point. I guess that’s progress.

I got out of the car and said, “Thank you,” without adding, “see you next week.”
He grunted as he stood on the sidewalk to light his cigarette.
Goodbye, Mr. No.

I like to write, take things apart and put them back together. Also our cat Snookie, turtles, and my lovely wife Danusia.
View all posts by xaviertrevino →
This entry was posted in Uncategorized and tagged acceptance, anxiety, Chinatown NYC, driving schools, humor, K-turns, learning to drive, parallel parking, road test, student driver. Bookmark the permalink.