BACK IN THE USSA 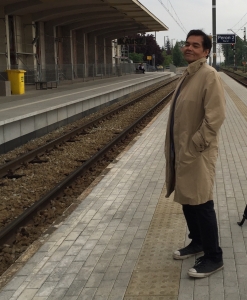 I wanted to call this post “They got dogshit too,” but I’ve grown less prone to be shocking (or vulgar) in my old age. So a pun on the old Beatles song will have to suffice.

Years ago, in 1980 I was in the army and visited Germany, West Germany, to be exact, for 2 weeks. We were told by our officers not to speak to the German kids because they were “all communists,” and would try to persuade us to defect, or something. I did, in fact speak to a bunch of German kids, and what they did do was criticize Americans for being such wasteful, inconsiderate bastards. It was more ecology than communism. But hey, I never believed anything my officers said anyway, so I had no worries.
I’ve always been fascinated with Eastern Europe, with the cold war, and all that spy stuff. I’ve read countless books about Prague, Warsaw, Moscow, about the Metros and the trams and the underground passages and 6th floor cold water walk-ups in Soviet era block flats. So I was unprepared for how beautiful and quite pleasant Poland was. I guess American propaganda was pretty good.
I met a great deal of people in my 10 days in Poland, some of whom spoke English. At a dinner party in Danusia’s honor I said to one of them,
“Oh, I’ve been to Europe before. Germany and the UK, but this is my first time in Eastern Europe.”
“Central Europe. Poland is in central Europe,” he said, his smile frozen in place. Touchy, I thought. Where did I ever get the wrong idea? 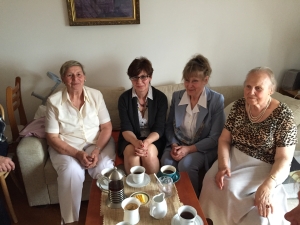 Three Aunts, one cousin, no English.

I had a great time, even though at times I felt out of place, like the attack of the aunties one evening at Danusia’s sister’s place. Her sister Joasia decided to have an impromptu dinner party at her place so all the aunts could come and meet me. Meet me they did, but after the first few minutes it turned into an evening of swapping tales with Danusia (she hadn’t seen them in a while) and interest in me waned the second they realized I spoke no Polish.

We’d gone to Poland to attend the first communion of Joasia’s grandson. The church ceremony was interesting, reminded me of my own first communion so many years ago. These kids had a catechism teacher who sort of guided them through the whole thing; we had nuns who made sure you knelt properly.
“No half-sitting on your asses!”
The party afterwards was the big deal, in true Polish tradition the whole communion party went to a catering hall and we literally sat at tables for six hours as course after course was brought out and served. I haven’t eaten so much meat in years. But it was delicious.
That was one of the best things about Poland, everywhere I ate the food was wonderful, and the presentations were out of this world. We ate in this one place in Kalisz that I wished I could wrap up and take home with me, chef and all.
We stayed in five different places in my less than 10 days there. Two nights in a boutique hotel in Kalisz, three nights in a truly austere hostel run by the Catholic church, a night in one of Danusia’s friend’s home just outside of Łódź on our way to Warsaw, then a night in an “apartment” hotel in central Warsaw (there goes that word again!) and the remaining two nights in the apartment of a friend of a friend. That one was the best, despite having no Internet. The Catholic hostel had Internet.
Warsaw was great; I really loved it and wished that I could have spent more time there. I met Danusia’s actor/theater friends, went out to dinner, saw the “Rising” museum, (that’s what they call the 1944 Warsaw uprising) the old city, and plenty of the new city.
The first night we went to a dinner in our honor at a friend’s house I was a little apprehensive. I am a person who usually Google-maps everything obsessively when going somewhere I’ve never been before, and here I was with Danusia who got the directions over the phone. 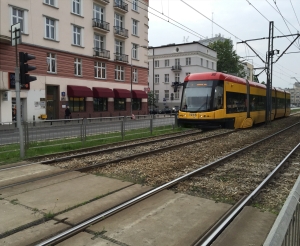 “I think this is the tram we have to take,” she said. You think? We got on the tram, and she did ask some woman where to get off. What she’d told me was that we’d see a large plaza with a fountain, and we’d get off there and walk a bit. When the woman indicated our stop to get off, I saw no plaza or fountain. But it was the right stop.
We walked a bit and I had to restrain myself from asking “how much further?” She kept saying, “I think it’s this way…” 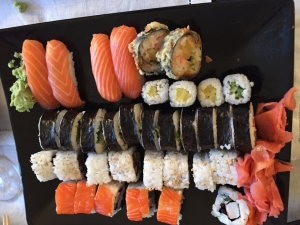 They actually made this.

We found the apartment block, and walked up to a beautiful one-bedroom apartment and had a scrumptious homemade sushi dinner. Out hosts were wonderful, two men in the Polish entertainment industry. Unfortunately they and the two other guests smoked, and despite having the door to the balcony open, the second hand smoke was killing me. 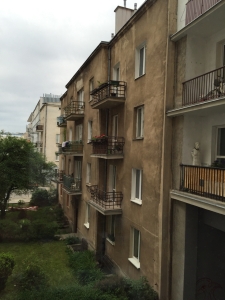 That was the wonderful thing about most of the places we stayed, they had balconies. Even the Apartment-hotel suite had a balcony, though it was barely big enough to fit two people at a time. You could see the Ministry of culture building from there, and art-deco monstrosity that was a gift from the people of the Soviet Union in 1950. The architecture was more like 1889 than 1950, but it was an interesting contrast to the modern all-glass skyscrapers that dwarfed it. 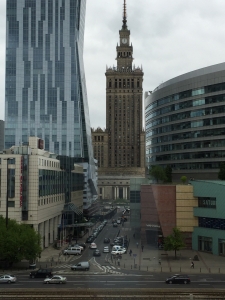 Warsaw is a beautiful city, despite the abundance of the Soviet-era blocks everywhere, and they are actually more interesting than American architecture of the time. At least they all have balconies.
The streets are wide, and all of the big boulevards have tramlines. The public transport is plentiful and efficient.
I loved riding the trams, and I have to wonder what kind of idiots decided to do away with trolley systems here in the States. Oh, wait, that would be the automobile industry. Despite all our cars, it’s still a pain in the ass to get anywhere in an American city.
The streets were remarkably clean, and yes, they have dogshit too, and graffiti, but at least the graffiti was a lot more artistic and appealing than some of the dogshit I see scrawled on the walls of my neighborhood. 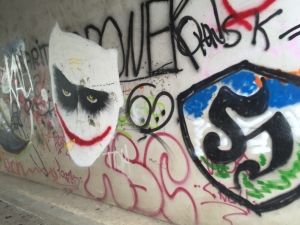 I was surprised at what a vibrant, consumer-oriented society Poland has. There were stores and cafés everywhere, and the young people are excited about the future.
There was talk of living in Warsaw for a while, if Danusia gets work. Hey, I’m game. I may even learn to speak Polish.

I like to write, take things apart and put them back together. Also our cat Snookie, turtles, and my lovely wife Danusia.
View all posts by xaviertrevino →
This entry was posted in Uncategorized and tagged anxiety, architecture, cold war, communisim, family, food, hotels, humor, Poland, Soviet Era, Trams, transportation, travel, Warsaw. Bookmark the permalink.

1 Response to BACK IN THE USSA