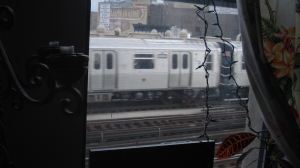 Yesterday was a surprisingly warm day, despite the nearly all day overcast. I left for a job in the late afternoon and wore a leather jacket over a tee and flannel shirt. Fortunately, I forgot my phone and had to go back upstairs. I shed the leather and put on a cloth windbreaker, still too warm. I took off the windbreaker and put it in my knapsack.

The only reason I took the windbreaker was because I knew I’d be coming home after dark, and it would be cooler. Spring is the season of cool nights and warm days, and the temperature can drop dramatically once the sun goes down. Thursday night proved that, I wore a light trench coat and was freezing as I walked home past the cemetery that night.
But last night it was still warm enough I didn’t need the jacket on my way home from the subway. When I got upstairs, it seemed very warm in the apartment, so I started opening windows. Thank god it was a quiet Friday night.
It cooled down the apartment, and as I made dinner I listened to the sounds from the alley between our building and the one across from us. We face the back of a building on 151st Street.

The window was closed due to snow.

I could hear someone practicing on a piano somewhere down below; I think they are on the third floor, and various radios or stereos playing different kinds of music. It was all faint and sort of comforting, no loud arguments.
There is a woman across the alley who practices singing every once in a while, we can only hear her if our window is open and hers is as well.
She’s got a great voice, but sometimes I could do without listening to her sing.

Cat listening to the roar from Woodhull.

When we lived in Brooklyn, I was loath to open the windows at any time, except when there was no service on the JZM line that roared by the front window with some regularity. My ear was so tuned to the timetable after 8 years there that I knew when there was a problem on the train.
Even in the bedroom you could hear the train’s noise reverberating off of the hard façade of Woodhull Hospital.
Speaking of Woodhull, a couple of times a month the hospital ran some kind of machine that emitted a loud annoying roar that went on for hours. Even with the windows closed you could hear this thing, and it was always at night. Why couldn’t they do it during the day?
I got used to the screaming sirens of the ambulances arriving at Woodhull, again with some regularity but Saturday nights were something else, especially in the summer.

At least we had ceiling fans, one in the living room, and one in the bedroom. That helped some during open window season.
In that building we had a utility closet and since we lived on the top floor we had a lot of space on the landing outside our front door. I kept the big air conditioner under the ladder to the roof, and the smaller one in the utility closet.
Right now our air conditioners reside in a storage room in the basement, I’m dreading the day I have to wrestle those things up 5 flights of stairs. One day at a time, I tell myself.
For now I’m glad we can have the windows open and still be able to hear the TV, and our own thoughts without too much annoyance. They are predicting almost 80° today, so I know it’s going to get a little sticky later. Hopefully there won’t be any parties tonight. There is a family that lives in the front of the building that play their music so loud we can here it here in the back, they leave their windows open and it reverberates through the side alley and against the façade of the building behind us. So far we’ve only experienced a couple of those, thankfully.

Air conditioners are great sound-mutes, they are like those white-noise machines therapists put in front of their office doors to scramble the sounds of the voices within. Those don’t work, by the way. I can always hear what’s going on inside pretty clearly.
I wish I could build big sound baffles outside all of my windows and not hear a thing, but I can’t. So we have to get used to the sounds of the city, and deal with them.
We could always move to Antarctica, I’m sure it’s pretty quiet there.
No wait; it’s windy there, isn’t it? Very windy. You can’t win.

I like to write, take things apart and put them back together. Also our cat Snookie, turtles, and my lovely wife Danusia.
View all posts by xaviertrevino →
This entry was posted in Uncategorized and tagged acceptance, anxiety, Brooklyn, city life, humor, JMZ trains, Manhattan, noise, Spring, Summer, windows. Bookmark the permalink.