Posted on February 8, 2015 by xaviertrevino

In the ‘80s my first wife and I lived on Houston Street off the corner of Clinton for five or so years. It was a very interesting time for the East Village, and one of the changes, or new things that came besides the Pyramid Club on Avenue A was the health food store on 1st Avenue between 7th and St. Marks place.
I liked it because it was cheap and funky, all the kids that worked there were real East Village characters with lots of hair and attitude.
When we had a kid in the late ‘80s and moved to Greenpoint we still went to the EV regularly because we had friends there, and frankly, because we missed it. I started buying the bulk-unsweetened bags of no-name cereal they sold, now that I had a kid that liked cereal for breakfast.
Another thing the store had that was new was the peanut butter machine, where you could grind your own peanut butter. They also had almonds and cashews for grinding, but peanuts were the cheapest and that’s what I bought.
I think this place was also the first to have a juicer, but not being into juicing I wasn’t so interested in juicers and didn’t pay that much attention, so I may be mistaken.
I’ve always been a big peanut butter fan; whenever I could I bought Skippy, sometimes Jif, which was more expensive. Often times I bought those no name store brands, which were the cheapest, but didn’t taste as good.
When I was a child growing up in the housing projects in Brooklyn, a lot of our neighbors were on welfare and would get these surplus food products from the government, I guess it was pre food stamps or something, but they would get these giant cans of peanut butter and 3 pound blocks of orange-colored cheese, it was a lot and some of them sold off their surplus-surplus for cigarette and beer money.
My mom would buy these cans and blocks, having four kids to feed and little money. I liked the peanut butter and was always happy when my mom got a can or two, I think it had something like 3 or 4 pounds of peanut butter in it, I know it was a huge can. I once heard the smallest child of one of the woman who sold her surplus exclaim;
“Ooh, I love that welfare peanut butter!” He was four years old and had a great smile.
I loved it too.
What happened the first time I bought the grind your own peanut butter at the health food store was that I was surprised at the taste and consistency. It just didn’t taste like peanut butter. It was bland and grainy and was a little like eating sand.

I went back the next week and tried again, maybe that was a bad batch and this one would taste different, more like Skippy. But it was no different.
My kid didn’t like it either, he wanted Skippy or Jif. 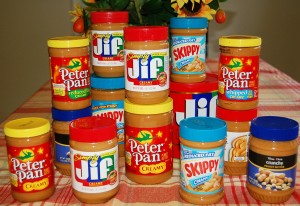 I had just discovered Ants On A log in some book about how to get your kid to eat healthier, it said to slice a banana in half, smear peanut butter on it, and dot it with raisins. My kid loved it.
For me I dispensed with the ants and the log and just ate the peanut butter out of the jar with a spoon. It’s no wonder that I ballooned to almost 300 pounds when my kid was 5 or 6.
This was in the days before I was sent to a nutritionist, who explained about high-fructose corn syrup and the high fat content of nuts. I was sent to a nutritionist because I’d developed adult onset diabetes. I cut out the peanut butter, even the health food one that had no additives. I also discovered those were raw peanuts, with no salt added, ergo the big difference in taste.
The health food store closed some time ago, but most recently in my life, a different one that I’d had with my first wife and a hundred pound lighter I started shopping at Whole Foods. Since the nutritionist, who by the way probably weighed all of 90 pounds I’ve learned to read labels, and to avoid processed foods and high fructose corn syrup. Sugar of any kind if I can. I’m not always successful on that one, but I never eat anything with HFCS. I no longer drink soda, not even diet soda. Have you ever seen a skinny person drink diet soda? Think about that.
But that peanut butter keeps-a-call’in.
Whole Foods installed those nut grinders and I of course started buying fresh ground peanut butter. At least they (and Fairway) use roasted peanuts, and all I have to do is add salt to get the taste I like.

When Whole Foods and Trader Joe’s first came to New York I tried their store brand peanut butters, the kind without high-fructose corn syrup or partially-hydrogenated vegetable oils. These are added to peanut butter to give it a better consistency, but the body is not designed to process them and they become instant fat on your body. Another thing I learned from the nutritionist. Also known as trans-fats, stay away from the trans-fats.
I think I liked the Trader Joe’s better. 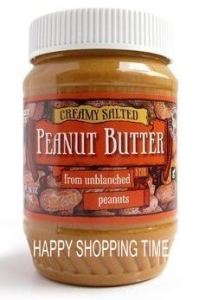 One night I was watching the Sopranos with my new wife Danusia, ant there was Tony Soprano sitting with his cronies and his son in front of the TV in his wife-beater eating Skippy out of the jar with a spoon. I was sitting in front of my TV with a jar of Trader Joe’s smooth peanut butter and a butter knife. It made me think. I lay off the peanut butter for a while, but succumbed when they put in the grinders.
Since remarrying and getting older the weight has crept up, I was pretty unhappy with the way I looked last year, having passed the 200-pound mark again. I stopped eating chips and hummus, and started eating solid nuts instead of peanut butter. Solid nuts are more work to eat, so you eat less.
So that’s the rule of thumb, the easier it is to eat, the fatter it will make you. I remember that and try and make the right choice. But I’m not always successful at it.

I like to write, take things apart and put them back together. Also our cat Snookie, turtles, and my lovely wife Danusia.
View all posts by xaviertrevino →
This entry was posted in Uncategorized and tagged diabetes, East Village, food, health food store, humor, nutrition, peanut butter, Trader Joe's, weight loss, Whole Foods. Bookmark the permalink.