MORE THAN I CAN CHEW

When my unemployment ran out a couple of months ago I experienced a moment of panic, a what am I going to do now moment? I knew nothing would change right away, and I do have some savings, so I just soldiered on.

I’ve been doing odd jobs for cash since I lost my job, $30 here, $200 there. Mostly I sat home and wrote or watched TV. I did have plenty to do when we had to move suddenly last October, but it was a generally idyllic time for me. But more productive than the last time I was on unemployment, 18 years ago.
That time I sat at home and ate, built model airplanes, and watched TV until the wife and kid came home from school and work. Except for the model airplanes which nobody but me gave a shit about it was a pretty unproductive existence.

Back then I’d gotten fired from a shoe store, I’d been a sort of orthotic technician/shoe repairman/salesman, and had no real skills. I guess making orthotics counts as a skill, but who wants to make orthotics?

Then I got the job in the building, where I managed to learn some marketable skills. I learned how to install stuff, fix plumbing and wiring, and make apartments look presentable.

Which is where I found myself for the last two weeks, making a dump of an office space look presentable. 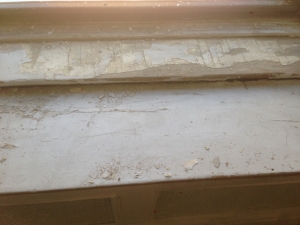 This is what the sills and covers looked like at first.

When I met the woman who wanted to hire me it was late, and pretty dark in the room I was to fix up. It looked like it needed work, but the person moving out was still there, and so were his pictures and furniture, so it was kind of hard to gauge the work and make an estimate. I gave a ridiculously low estimate, and when I saw the place for the first time in good daylight, I wanted to kick myself. I had estimated it would take a week to fix this place up and paint it; after all, it was just one 400 square foot room. Incidentally, the room was bigger than the last apartment I had when I lived by myself. I’ve been in there for seven days already. 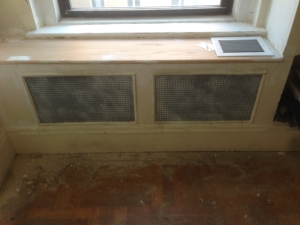 But I was in, the price I’d quoted would pay the rent for the next two months and I didn’t have to worry about that. But life goes on, and I started getting phone calls.
I put up some shelves for Mr. M’s girlfriend, that had been scheduled a while ago and I went over Saturday to do that. Sunday I was sick so I stayed home. Then I got a call Monday from a guy I’ll call L, I’ve done some work for him before and he wants a new sink and vanity put in, plus a flat screen TV hung on the wall. I could make a good living just hanging flat screen TVs.

It thought I could squeeze him in this week; after all he is only 10 blocks from the office job. But after I started painting yesterday I knew I wasn’t going to have time for him this week. I called him to cancel, he wasn’t happy, but there’s not a lot that can be done. I can’t be in two places at once.

The best thing about this job is the view; the room is on the 13th floor of a building on Central Park West, catty-corner to the park. The second day I was there it snowed, and I ate lunch looking at the snow-covered park. It was like a postcard.

When I finally started painting yesterday, after a week of scraping, filling, sanding, and rebuilding the windowsills and disintegrating radiator covers I was dismayed to see the paint was not covering too well.

I started on the ceiling, and incidentally I found a 4-foot crack in the ceiling I hadn’t noticed before, this had to be repaired before I could paint that section of ceiling and I wanted to kick myself for missing it in the first place. After a day of painting the ceiling, more than two coats in places, it still looked like shit. Very patchy, even in the places where I didn’t do any repairs. I hated the paint, Benjamin Moore “one coat” paint. One coat my ass. It seemed like I was going to be in this place forever.

When I went in today, to my surprise the section of ceiling I’d given three coats looked great. Even the 4-foot gash was undetectable, just look at the picture:

The crack is gone.

Well, that was heartening. I quickly got to work and put another coat on the other two sections of ceiling (there are two crossbeams that divide the ceiling into three sections) and started on the walls. I went around the room three times, and the walls looked wonderful. And I still had two gallons of unopened paint. I over estimated how much paint I would need.

The room is going to look wonderful when I’m done, Friday’s the day I’ll be out of there and I’ll be ready for some new adventures. And I learned a couple of things, like never to give an estimate in the dark and you only need two gallons of paint for a 400 square foot room. Anybody need any paint? It’s a nice color.

I like to write, take things apart and put them back together. Also our cat Snookie, turtles, and my lovely wife Danusia.
View all posts by xaviertrevino →
This entry was posted in Uncategorized and tagged Central Park West, estimates, free lance handyman, odd jobs., painting, skills, unemployment, work. Bookmark the permalink.