LETTING IT ALL GO

Posted on September 16, 2014 by xaviertrevino

In preparation for our move I started sorting through stuff, throwing out things that are useless and preparing to let go of some stuff I’ve been carting around for the last 14 years, when I got divorced.
Back then; when I was married to my first wife, I built plastic models as a hobby. It all started when our son was born, and I started frequenting toy stores. I found out that some toy stores actually still sold styrene model kits, something I’d done as a child. On a lark, I bought one kit, it was a 1/72 scale A-10 Thunderbolt II, the plane I remembered from my army days that we did joint exercises with.
11 years later, when I moved out of the apartment I shared with my then wife and child I had accumulated some 500 kits, mostly aircraft, but with tanks, trucks, and soldiers thrown in. No ships, submarines, or cars. I think I had 20 decent sized boxes full of un-built models.
I also had a bunch that were built, the ones that had survived my ex-wife’s brutal handling whenever she dusted. I eventually opted to get rid of those, no mater how beautiful they were and how much work and effort I’d put into them.
But yesterday I found a couple, some of the smaller kits I’d built.
In one shoebox I discovered a beautifully painted 1/72nd scale B-47 bomber, pictured above.

In a smaller box I discovered a tiny (1/35th scale) Soviet WWII machine gun, and some 1/48th scale 500-pound bombs. I realized that my work is what they call “Museum Quality.” If any of you know anyone who needs a Museum Quality model builder, let me know. I must be able to make money with this kind of skill.
I also found some “collectables,” stuff that I bought with the express purpose of reselling sometime in the future at a profit. I found a Gene Simmons Kiss doll, with “AXE.” I found a Marv “limited edition” doll strapped to an electric chair and I remember it had been pulled off the shelves because it was in poor taste, or something like that. I didn’t even know who “Marv” was, just that he was some cartoon character. OK, some “graphic novel” character. I don’t get graphic novels, but a lot of other folks do, so I’ll keep my mouth shut about it.

I do get the mania for collecting, though, being one myself, the evidence being in accumulating 500 plus kits.
Back when I was recently divorced, one of the first women I dated came to see me at the dump of an apartment I’d inherited from my dad in Hells Kitchen. That apartment had a sort of loft my brother had built many years ago, and I had crammed my 20 boxes of models up there. My date looked up at the loft and said:
“What’s in all those boxes?”
“Plastic model airplanes,” I answered.
“You gotta get rid of them.” We broke up within six months, and it wasn’t because she told me to get rid of something I loved, because I did love my airplanes, but as you can see by my clear recollection of the incident, it didn’t help the relationship any.
She was right, and when I had to move out of that apartment after putting my dad in a nursing home, I realized I couldn’t keep dragging all of these kits around with me and made some hard choices about what to keep and what to get rid of. I found someone who had an eBay account and he got rid of most of the kits, well over 400 of them and we made some money. I think I even made a profit, as many of the kits were rare and limited edition.
So the other day I opened my own eBay account, and listed Gene Simmons and Marv on that.
Yesterday I started going through the models to make a list. I ran out of patience when I got to 69 kits and just threw in the rest of them, here, take this, it’s free. These three boxes I’m going to try and sell to somebody that buys collections, or if not donate them to a military hospital where soldiers recovering from injuries build them as therapy. I found two different websites on line that do that sort of stuff.
Of course there were some super-super rare kits that I put aside for when I’m old and have nothing better to do. So I’m down to one box.
I have tools as well, tiny pliers, files, an airbrush, tweezers, drills, sanding sticks, anything you might need to build a museum quality kit. I got rid of a lot of the stuff, whatever there were duplicates of, and I saved some for my friend Dennis who like to build dioramas. He does scratch building, but I’m sure he can use some of this stuff.
I once got a job using a model I’d built; the ad in the Village voice wanted someone who was familiar with ‘rotary tools,” and I went to see the woman the next day. She was a jeweler who wanted to train someone to clean white metal castings.
“I made this using a rotary tool,” I said as I took out a tiny Renault tank that I’d built, and it looked like exactly this picture: 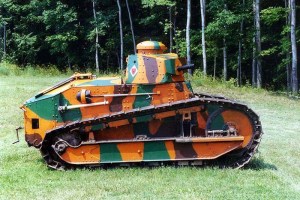 As a matter of fact I think the kit was based on this tank in some war museum in France, it had the same little heart decal on it.
The woman, Connie I think her name was held it in her hand and looked closely at it.
“Can you start tomorrow?” She asked.

I like to write, take things apart and put them back together. Also our cat Snookie, turtles, and my lovely wife Danusia.
View all posts by xaviertrevino →
This entry was posted in Uncategorized and tagged apartment living, change, collectables, downsizing, humor, letting go, model building, moving, obsession, selling on eBay, styrene model kits. Bookmark the permalink.