Posted on August 9, 2014 by xaviertrevino

A couple of weeks ago I was at an event and was sitting next to a friend, actually he’s more of an acquaintance. Best described as a guy I know. I’ll call him Jeff in order to protect his anonymity.
As way of greeting Jeff looked down at my feet and said:
“Flip-flops? What are you, a tourist?”
I should have said I never comment on what you are wearing, Jeff; but what I said was:
“What makes it touristy?”
“How can you walk around the city in flip flops?” He said.
I used to do it more, one summer about 13 years ago I wore flip-flops exclusively well into late October when my feet started getting cold. Now it’s only on very hot days, or when I’m not doing a lot of walking. Getting old takes its toll on all parts of the body, including feet and arches.
“Would you prefer I wore heavy Roman gladiator sandals with studs and white socks?”
Yeah, that might be a little better,” Jeff added as a way of retreating form a really dumb conversation that he’d started. 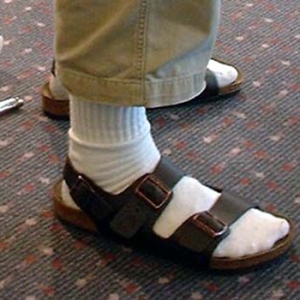 Jeff never wears flip-flops, or any kind of sandal for that matter. The best he can do in the summer is to wear sneakers, with socks. I don’t wear socks in the summer unless I have to work.
In case you are wondering about foot odor, I have five different pairs of sneakers and if you alternate them and give them a chance to air out your feet won’t smell. Besides, I’m not prone to heavy sweating.
I’ve never had a problem exposing my feet, I’d go barefoot if it wasn’t for all the glass, vomit, and dogshit on the city streets. Oh, and the concrete, it’s pretty hard.
In the countryside I love to walk barefoot through the grass, feel the dirt between my toes, it makes me feel closer to the Earth.

The Alvin Lee clogs. Easy to step out of.

When I was a freshman in college, I had a pair of white perforated Olaf Daughters clogs; the same ones Alvin Lee of Ten Years After wore at Woodstock. I was working in a shoe store in the Village, Bloom’s Shoe Gallery on 6th Avenue and we carried those clogs, and right after I saw Woodstock I got a pair, at my employee’s discount. I think I paid $15 for them.
One day, probably the first week I was living in the Pratt dorm I was walking through the hallway and I spotted a line outside an apartment door. There was a very pretty girl at the door letting people in one by one.
“What’s going on?” I asked her.
“We’re having a Wisconsin Sleeper’s party. Wanna come in?”
“Sure,” I said, and got in line.
When it was my turn I went into the apartment and another pretty girl told me to put on a blindfold and go into the bedroom, there was a surprise waiting for me in there. I eagerly let her tie the blindfold around my eyes and she led me into the darkened room, closing the door behind me.
That’s when I heard yet another female voice ask my name, and then lay out a scenario:
“We just got married, and I’m laying here in bed. What are you gonna do?”
“Get in bed with you,” I said breathlessly, I couldn’t believe my luck.
“Don’t you wanna take something off first?” She said.
I have to explain what I was wearing first. I had on a Tee shirt, jeans, and my white perforated Alvin Lee clogs. And nothing else, I was going commando. So in one motion, I jumped out of my clogs, pulled off my pants, and then the tee shirt.
“Don’t you want to take anything else off?” She asked, stopping me from jumping onto the bed. I though for a second and I realized I was still blindfolded.
“Ah, I guess the blindfold?”
“Take it off.”
I took off the blind fold, and as I did someone switched on the light and I discovered that in addition to my “wife” who lay on the bed, there were at least ten other people in the room, sitting on the floor or in chairs all looking at me standing butt-naked and erect in the middle of the room.
I put my clothes back on sheepishly and joined in the fun. Only one other person took all their clothes off, a girl, and we were the king and queen of the Wisconsin Sleepers and she came back to my room with me after the party was over.
What I learned from that was that is that accessibility is everything. 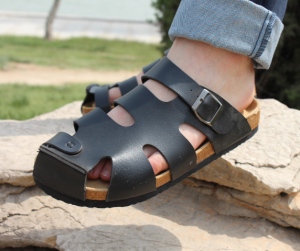 How’d you like to walk down the block with a girl wearing these?

I got a job at Olaf Daughters a few years later, on 6th Ave and 11th Street. Catty corner across the street from us was the Birkenstock store. I’ve never had the pleasure of wearing those, since to me they are pretty ugly, the equivalent of wearing gladiator sandals with socks.

In the 80’s came Tevas, a combination of sneaker technology and sandals. My first wife Kathy used to wear those. I was working at yet another shoe store at the time, Yorke Dynamold Shoes in Forrest Hills, and one of the things I did there was repair shoes and make orthotics. I remember making myself a pair of slide-on sandals with a white sneaker sole we had lying around the shop and a piece of blue leather that I perforated with a hole punch. I made a custom leather covered foot bed and glued it to my invention. They were one of a kind and cool looking and comfortable, but they stretched out after one summer and I never tired it again.
There were also the dreaded “EARTH SHOES” back then, the epitome of hemp-and beard hippiedom. Another missed pleasure.

It’s good to let your feet air out; I think it airs out my soul a bit as well. So many guys I know are so afraid to expose their feet; I have another friend who wears Chippewa work boots all year round, even if it’s a hundred degrees outside.
What you wear on your feet says a lot about a person; don’t forget that.
I like shoes that are comfortable and not too ugly. But then again ugly is a matter of opinion, isn’t it?