I was scheduled for a ‘task’ this morning, at 8am. The job was to hang a PowerPoint projector from the ceiling somewhere down in the Wall Street area. The guy had sent me a picture of what they had, the part that goes in the ceiling. They did not have the piece that went on the projector, and I had texted him a suggested bracket.
I hadn’t heard from him, despite one message yesterday asking him if he’d gotten the part, so I figured I would show up, see what the deal was. I texted him that I was on my way.
As I waited on the elevated platform for the M train to Manhattan, the text came, “did not get the part, can we re-schedule?” I called him, using the blind Google call feature Taskrabbit uses, and left it at that, I’m waiting for the go-ahead.
It was not a wasted trip, though, since I was also scheduled to feed my friend Jenny’s voracious monster cats. I went up to 26th Street instead.
The cats were anxious and hungry, or maybe they were anxiously hungry, and there was a note with four little cans: “Divide four cans for three cats!” The cats swarmed me as I opened the cans, I had to push them away just to get the food on the plates.

The plates were licked clean in seconds.

There are three plates, and you would think each cat would stick to one plate, but they don’t. They all attack one plate at the same time, and the two smaller skinny cats bully the big one called Koko, who I assume is a guest.
Koko meekly goes to sit in a corner. If I was bigger than the other cats they would not get away with it, I would sit on their heads till they quit eating my chow.
While the voracious monsters were devouring one plate, I took another can and plate in the bathroom, served it on the plate and locked Koko in with it. The other cats, noticing the food going in the bathroom tried to get in.
“Tough luck, suckers!” I crowed, amazed at my own ingenuity.
Then my phone started to ping with tasks. There was one right around the corner, tying cables together with zip ties, and I took the job. She said she needed to wait till 9:15, so I cleaned up after the cats, emptying the litter box SOMEONE ELSE was supposed to empty, (NOT Jenny) and I cleaned up all the little shredded pieces of cardboard the cardboard eater leaves strewn around. 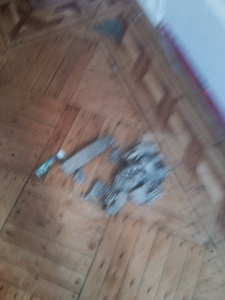 I know it’s a little out of focus, but you get the idea.

I sat to wait and read the paper and took snaps of the fighting cats, a blog post working itself out in my brain. I didn’t hear form the woman around the corner, so I was going to go back to Brooklyn when I got another ping. Hang a 50-inch TV on 17th Street. I took the job, said bye to the little monsters and walked downtown. I hoped it was not a sheetrock wall.

The fighting cats. Koko stays out of it.

I got to the address, and it looked like some kind of dorm for Mount Sinai. I called the client and he said it was the right place, so I went up to his apartment, riding up in the elevator with two young people, a man and a woman wearing scrubs.

“Are you on rounds?” Asked the man.
“I switched to afternoons,” she answered. Interns, I surmised.
I got to the door indicated in the text and a young Indian guy in scrubs opened the door.
“You’re a doctor,” I said.
“Sort of,” he answered.
He showed me the monster 50-inch TV and the wall mount. I proceeded to assemble the mount and checked the wall he wanted it hung on. It was sheetrock.
I was lucky I had the drill and assorted wall fasteners that I was going to use to mount the projector.
“Ah, this is a sheetrock wall, I hope I can find the studs to take the weight.”
“Do what you can,” the sort of doctor told me. I measured, and the wife, a very pretty young barefoot woman came out to render an opinion (more like a pronouncement) on how high the TV should be on the wall. When we were all in agreement I made my pencil marks on the wall.
I drilled into the stud on one side, luckily this was a three foot wall that was the side of a closet and I knew there was a stud there; and I was actually able to find the stud near the other edge of the wall after making a big hole for a butterfly nut I was going to use. I was able to use the big carriage bolts included in the kit. Sometimes you get lucky.
In the process I somehow stripped a nut that went on the frame mount, skinned the knuckles of my left hand trying to force the nut on, and left little dots of my blood on the wall where I hung the frame. Luckily the TV is huge and it covers everything, including the unnecessary big hole.
The sort of doctor and his wife were very happy and we did the whole payment thing on my app, I gathered my tools and set off for home.
So I started out to do one thing for someone, but ended up doing another thing entirely for someone else using the same tools. I never heard form the woman on 27th Street but I wasn’t going all the ways back up there even if she had contacted me. Life gets interesting in Rabbitland.