THE THRILL OF IT ALL

Yesterday morning I went to my very first Taskrabbit gig. I had been hired right off the bat by a young woman whose profile said: “first time using Taskrabbit.” So she was a first timer, I was a first timer.
She’d set a time of 8am on Friday when she hired me, over the weekend she moved to time back twice, first to 9, then to 10am sometime Sunday night while I slept. She also inquired if I had the tools/nails/screws to hang a closet bar and a “heavy” picture on a wall. All of this was done by text messages on my Taskrabbit app on my iPhone.
I showed up at 10, at some commercial building on West 14th Street, there was a nail salon on the second floor and a wax/massage/who knows what else on the third floor. I rang the bell she’d indicated and got no answer. Maybe it was a big joke on me, or a test to see if I would show up. I used the “call” feature on the app, it’s a Google phone so you can’t see their number and they can’t see yours. She answered and said she’d be right down.
She was a young “Desi” woman in her mid 20’s, pretty but with a perpetual expression of distaste on her face that made her seem less attractive, what my mom used to call the “shit smelling” face.
She was on the top floor, it was a floor through loft with two sheetrock bedrooms built into the back part of it. It was a nice space, but a little disorganized. We went into to the bedroom where the closet was and she showed me where she wanted the rod. It was a big long closet, and the shelf that was there already was bowed in the middle from the weight of too many clothes hanging from it. The closet was 82 inches wide.
“If you want to use a rod that long, you’re going to need a center support, otherwise it will eventually bow in the center like that wood did.”
“I’m not going to be here that long,” she said.
We went down the block to the local hardware store and got the rod, I recommended the more expensive chrome rod over the wood, which I knew would break right away. She had a lot of clothes piled up all over the place.
I hung the rod, and then we started to figure out where the heavy picture should hang. It wasn’t that heavy, but I figured a screw and anchor would be just fine. She knocked at her roommate’s door to ask for her opinion, and a really beautiful girl in black panties and a tee shirt appeared.
“Yeah, that looks OK,” the girl said before disappearing back into her room. The whole thing took exactly one hour, and we pressed “submit hours” on the app. I left and went shopping at Trader Joe’s just up Sixth Avenue.
I got home around 12:30, and as I was checking my emails and thinking about eating something a flurry of task “rescues” appeared on my phone. One was a guy who wanted a ceiling fan hung and he wanted to pay $17 an hour. I can hang that fan in 20 minutes, but I won’t touch electricity for $17 an hour. Let his ask a licensed electrician how much they want to hang a ceiling fan. I would guess a minimum of $200.

There was another one that sounded easy, go to IKEA in Red Hook and buy 60 cups and bring them to a start-up coffee company in Williamsburg, less than a mile from my home. I accepted the task and got on a B-57 bust to Red Hook. The client was paying three hours for the task at $17 an hour. I was on that bus for a little more than an hour, meandering along the Brooklyn waterfront passing my old stomping grounds in Bed-Sty and near Pratt. I made it to IKEA and found the cups. I got 60 of them in their egg-carton like holders, cardboard sheets that held 24 cups apiece. When I went to the register the girl said: “I ain’t even gonna count that.”
“There’s sixty of them.” She took one and scanned it. I bought one of those blue IKEA bags and walked over to the wrapping table to secure my purchase so that they would make the long bus trip to Williamsburg. I was glad I’d brought my folding utility knife, because I had to cut the cardboard to make 5 stacks of 12 and tie them all together. Two of the IKEA guards watched me intently as I made my package and tied the whole thing onto my collapsible hand truck. I’m going to need one with bigger wheels.
I got on a B61 to downtown Brooklyn, where I would catch a B-62 all the way to Metropolitan Ave where the coffee place was.
If the B-61 took a straight route up Flushing Avenue to Williamsburg it wouldn’t have been too bad a trip. But what the bus does when it gets to Nassau Street (which turns into Flushing Avenue) is it goes on a slow, meandering trip around the Farragut Houses near the Manhattan Bridge before returning to Flushing Avenue. That alone took 20 minutes. 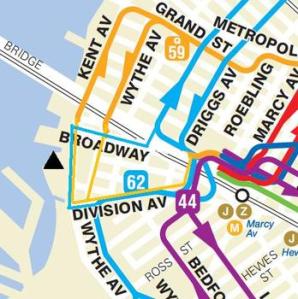 When we got to Williamsburg proper, there was another 20-minute meandering ride around another housing complex, this one home to predominantly Hassidic Jewish families. The whole ride from IKEA took almost an hour and a half. I spent three hours on the buses alone, if you count the 20 minutes it took to get home from the Bridge Plaza on the B-46 up Broadway. But it was an adventure, and it beat sitting at home watching TV and surfing the Internet.
I was exhausted by the time I got to the old warehouse building on Metropolitan Avenue, where a really young hipster kid helped me carry the cups up the stairs. It wasn’t a lot of physical labor, but the day was hot and humid and I made the mistake of wearing my Taskrabbit Tee-shirt, a 50/50 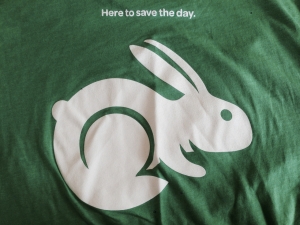 affair made by American Apparel (no kidding!) that has a large white Taskrabbit logo silkscreened on the back. The paint is vinyl, and it felt like some clammy hand was pressed against my back all day in that spot. By the time I got home the shirt was soaked with sweat and I took it right off and threw it in the hamper.

So, I didn’t make a hell of a lot of money, but the coffee guy gave me a good review and a thumbs-up rating. Hell, it’s a start.