THE YUPPIEFACATION OF AVE A

Last night I had to take out the garbage from 172, and if there’s any more motivation I need to find a new line of work it’s not ever having to that again.

172 has a compactor, that’s a machine that squeezes all the garbage that comes down the compactor chute in a building into a ‘sleeve’ of thick black plastic and is tied off at either end with special tie wires. There’s even a little tool that twists the wire tight so the garbage doesn’t spill out. The resulting bags are as big as the operator would like it to get, but they average 5 feet. And they are heavy and unwieldy.

I’ve used one before, years ago when I did the garbage at a place called River House way uptown, so I knew what to expect. But I still wasn’t prepared for it.

At 144 there is no chute, no compactor. The garbage is picked up by hand from the service entrances of the apartments. Then the small bags of garbage are stuffed into large black plastic bags which are then tied shut. These bags are kept in the courtyard, then on garbage night carried up a flight of stairs to the street. The average bag weighed 30 pounds and I always looked at it as a strength-training exercise, one in each hand.

Here at 172 the bags average 50 to 60 pounds, but luckily all I had to do was wrestle them onto a big dolly and roll them up to the street from the courtyard.

And therein is the rub.

I noticed one of the guys that showed me how it is done would use the wire-tie tool, which has a hook at one end to poke holes in the bags after he tied them up. This is ostensibly to let the air out of the bags, but it also lets out whatever putrefying and fermenting liquid is in the bag. This liquid smells like throw up and after the first two bags I wrestled my pants were covered in it.

I got all the black bags up to the street (the courtyard is lower than the street and there is an incline) and stopped to catch my breath. Just then two very pretty young women in very short skirts and teetering heels were walking by. They stopped and looked at me standing down in the courtyard, and one of them, the taller of the two, yelled down:

“Take out the garbage! It’s garbage night! What are you waiting for?”

I wanted nothing less than to run up the incline and punch her in her pretty blond face, see some of her carefully applied makeup run.

They shared a raucous laugh together and sauntered off on their teetering heels.

Mind you I only felt that for a second, I knew they are just drunk privileged kids that don’t know any better, that if they live in this neighborhood they are either trust fund babies or marvelously talented.

After finishing the garbage I went back to my post in front of the building to watch the drunken kids parade up and down Ave A. It was Friday night, after all, and a very pretty one at that. The breeze was delicious.

These kids were trying to piggyback, the two boys in front were able to but the girl was too drunk to get on her boyfriend’s back.

I used to live on Houston Street not far from 172 in the 80’s. As a matter of fact I had friends who lived here in 172 at the time, the first people I knew that had cable TV and me and my then wife Kathy would come over to watch MTV with them, back when it had actual music videos on it. The East Village was a very different place then, Ave A was junk central, and you could score drugs on any given number street just feet from the avenue. The further east you went, the better the drugs. Ave A was for the bridge and tunnel crowd who were scared of getting murdered on Ave B, C, or D. D was a definite place to get killed for any out-of-towners. 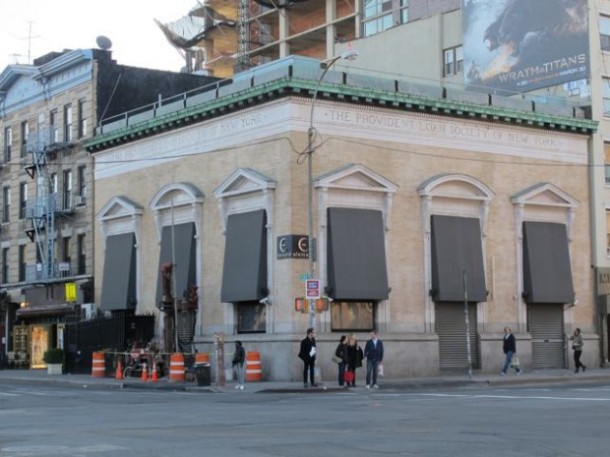 There is a club at the old Provident Loan Society building on Houston Street now, as a matter of fact there’s been a whole string of clubs there for the past 30 years since Jasper Johns gave it up as a studio. There are myriad bars, clubs, and restaurants lining the avenue from Houston to 14th Streets.

In the 80’s there was the Pyramid Club and A7 catty corner to it on 7th Street. A7 was a hardcore club, and the Pyramid was art-rock in its infancy. The Pyramid also owed some debt to places like ABC No Rio and No Se No on Rivington Street, pioneers of the downtown poetry/art/music do-it-yourself scene. Even before that was the 9th Street survival show at the old school between B and C that became Charras. I did the T-shirts for that show in 1981. 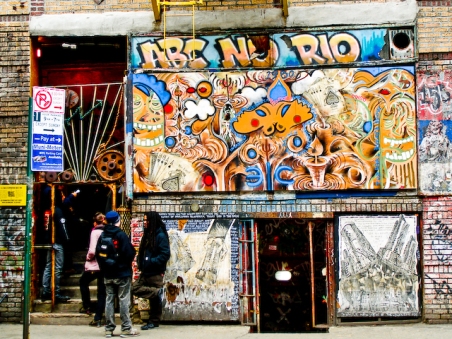 I hung out at all of those places, and the World on 2nd Street, of course.

A friend of mine was in a band called the Vipers at the time, and they opened for Joe Jackson at the World one night. I was scoring for him and he put us on the guest list. Seeing Joe Jackson for free in 1983 was pretty cool.

There was Lesko’s and Odessa. Lesko’s put red light bulbs in the bathroom to discourage people from shooting up in there. I don’t think the red light bulbs ever stopped anybody.

You hardly saw anybody on the street in the 80’s on a Friday night; the bridge and tunnel kids tended to stay in their cars out of fear of getting killed and most of the scene regulars lived in the East Village. I think we moved to Houston Street because of the do-it-yourself art scene, besides, the rent was cheap and the drugs were close.

All of that is gone, though I’m sure if you look hard enough you can probably score some drugs nearby, drugs are a staple of the NYC bar scene, and always will be. I smelled plenty of skunkweed as I walked the 9 blocks to the J train on Delancey Street last night. 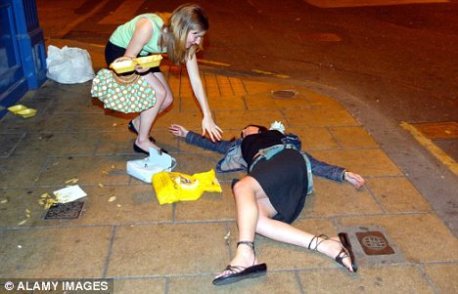 This is what the girl who taunted me earlier probably looked like by now.

But the drug of choice seems to be alcohol on Ave A. I’ve never seen such a dense collection of bars in my life, just about every other business on the street (I include Essex Street) is a bar or club.

And now there are velvet ropes! On Essex! On Ave A! Who’d a thunk!

There’s a place called Beauty & Essex that has limos in front of it.

As I wound my way down the street to the train last night, weaving trough the loud drunken kids I had to remind myself, I used to do the same thing. Perhaps I wasn’t a trust fund baby or marvelously talented, but I used to get high and drink and talk loud and weave down the avenue too, and I’m sure someone back then resented the shit out of me and my friends too. There just weren’t as many of us.

I like to write, take things apart and put them back together. Also our cat Snookie, turtles, and my lovely wife Danusia.
View all posts by xaviertrevino →
This entry was posted in Uncategorized and tagged 9th Street Survival Show, ABC No Rio, Ave A, Beauty& Essex, change, density of bars, drinking, East Village gentrification, garbage chute, garbage compactor, Jasper Johns studio, LES in the 80's, Leshko's, No Se No, Odessa, Pyramid Club, taking out the garbage, the World Club. Bookmark the permalink.

2 Responses to THE YUPPIEFACATION OF AVE A