How To Fold Panties

Posted on November 26, 2013 by xaviertrevino 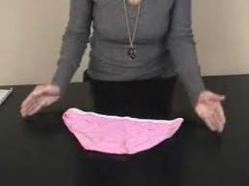 I did the laundry yesterday, I do it every Monday; and as I was folding the clothes I was thinking about today’s blogpost. I have a little list about things I want to write about, but then something will happen and I have to write about that instead of going to the list. But I will get to the list in due course.

I’ve got an idea about Boardwalk Empire’s Dr. Narcisse- loosely based on W.E.B. Dubois down to the beard; one about dueling plumbers dedicated to my good friend Maggie Estep, and others.

But since stuff happens, they will have to wait.

What happened yesterday was I was folding the laundry; and I always do it the same way at the Laundromat down the block with the Colombian woman who runs it watching Spanish TV at full volume- I guess she needs to hear it over the sound of 25 or so washing machines and as many driers.

So in between glances at the TV where the hosts on the Spanish equivalent of the Today Show or GMA sing, shout and dance their way through their guests I hit on an idea, as I separated shirts from socks and sheets and my wife’s panties- How To Fold Panties.

Panties are hard to fold flat on account of the elastic- no matter how hard you try they don’t lay flat.

Same with fitted sheets, especially the ones with elastic around the whole border; and we have a king-sized bed, so it’s doubly a pain in the ass. It was much easier being single. Single sheets, no panties to fold.

Of course, I could always wait for her to do the laundry, but I’d be waiting awhile.

So many memories ran through my head while doing the laundry, helping my mom fold and iron when I was a kid- not only did she do our clothing but she had a contract to do the laundry for our local church- our apartment had ropes I hung from pipes with vestments and albs hanging all over the place- we had a washer but no drier; and I had to help mom do all of this.

There are videos about how to fold tee shirts in 2 seconds .

There are even videos about how to make panties into roses.

And there are videos about how to fold fitted sheets, but I already know how to do that.

I have memories of folding my first king sized fitted sheets with my first wife; we had no idea what we were doing and did laundry once a month with baby in tow. A Cuban woman who ran that laundry taught us how to flake out and fold the fitted sheets. I can do it with ease now and actually get it flat enough to fit into the plastic case they come in new.

When it comes to the panties, which I do at the end with the socks, I make a little pile of panties, socks, and boxers and do those last, but the panties bring back memories of my first marriage, when I discovered my then wife was having an affair while I did the laundry.

As I was sorting the whites and colors and putting them into separate machines- something I’d started to do after one too many multi-colored disasters that come from mixing whites with colors and washing them in hot water- I came upon a pair of lime green Victoria’s Secret bikinis, something I had never seen her wear. She only wore cotton granny panties, as Hugh Grant had aptly described them in Brigit Jones’ Diary. But now here were these strange sexy panties with something dried and crusty on them that I knew for a fact did not come from me. I put them in my pocket like that, unwashed to use as evidence in the divorce proceedings, but somehow they never came into play, we got divorced and I threw them out a year or two later when I discovered them in a Ziploc bag as I was moving into my first single guy apartment.

They looked like this except they were lime green.

That she never asked about them only proved to me that I was right, and that she was right in asking for a divorce; we never communicated anyway.

When she and I first moved in together, we shared a single mattress on the floor. Then we scored another mattress, making sleeping a little more comfortable, and when we got the king-sized bed, we actually had a frame for it, started to grow up a little.

I’m far more grown up now, I don’t have to look at the panties and feel the pang of pain in my gut that I felt back then, I just roll them up into a little ball and put them with the socks at the bottom of the laundry bag.

I like to write, take things apart and put them back together. Also our cat Snookie, turtles, and my lovely wife Danusia.
View all posts by xaviertrevino →
This entry was posted in Uncategorized and tagged divorce, Doing laundry, folding clothing, relationships. Bookmark the permalink.

1 Response to How To Fold Panties