This One’s For The Kitties 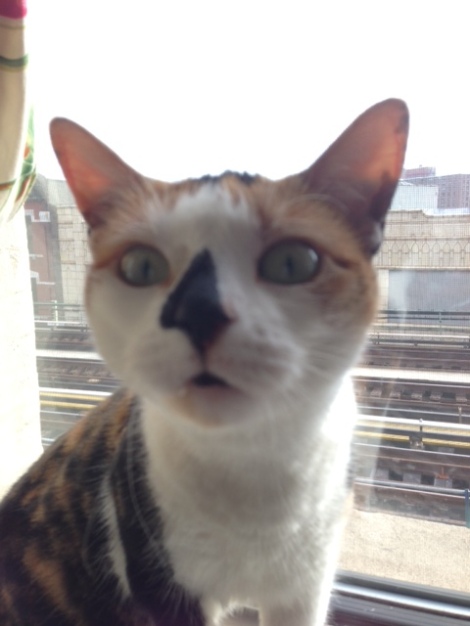 Sometimes I feed cats for people in the building when they’re away. This summer I’ve been part of team “Kitty,” feeding “Kitty” while her owner is gone. She has a beach house somewhere and spends four days a week there.

The other night, my teammate, a girl named Catherine came in to see “the cat.”

“I mean Kitty. Wow, what an original name.” She smirked.

I lived with a girl for a while many years ago who had a cat called “Miss Kitty.” An obvious Gunsmoke fan. The first night I spent with her was almost the last, as I stepped on one of Miss Kitty’s kittens (say that three times fast) on a trip to the bathroom in the dark. The kitten was OK and I was forgiven.

Miss Kitty was a skinny Siamese chocolate point with one eye, and as I mentioned, unfixed. My least fond memory of her was spending a weekend taking care of her while she was in heat. A very noisy experience.

Getting back to KITTY, another skinny cat of no distinguished markings, the woman wanted me to pet her but every time I try she runs away and hides. 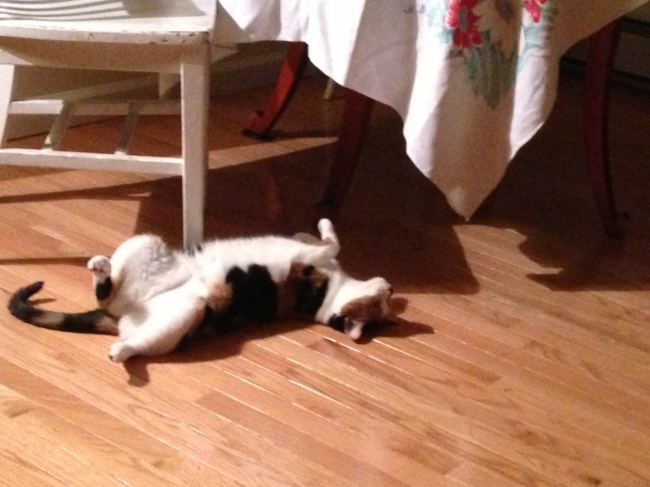 I lost one cat-sitting gig for not petting the cat, a big hairy Angora called Jade Riley (now that’s a name) who I was not too keen on touching on account of the hair. I don’t know how the woman found out, maybe she had a nanny cam, but she got another doorman to do it after that.

I had another regular, Frank; a big fat orange Tabby who went first class all the way. Frank (who names a cat Frank anyway?) had an electric litter box that had a rake to rake away the poop after he went, and electric food dispenser with a timer, (all I had to do was fill the dispenser with a can of cat food every day) and a reflecting pool electric water trough that circulated fresh water for Frank. That woman moved out.

Frank put me in mind of my friend Tommy’s cat Clyde. (Really? Clyde?) Clyde was another big fat orange Tabby who weighed 30 pounds. Clyde got sick with diabetes, and one day there was a fire in Tommy’s building while he was at work and Tommy’s wife ran out in her PJ’s on orders from the FDNY. When she reached the first floor she realized she’d forgotten Clyde, and had to go all the way back up to the 12th floor to get him, as Tommy would have been very unhappy if Clyde died of smoke inhalation or something. Clyde died of the diabetes a couple of days later.

Any way, all of these names, Clyde, Frank, (Frank’s on a par with Tony as a name for a dog) Kitty, make me wonder what I would name a cat or a dog, if I had one.

If it were a male, I’d call him William Blake, in honor of Johnny Depp’s character in Jim Jarmusch’s Dead Man. If it were a female, (cat or dog) I’d call her Madame Blavatsky, in honor of the 19th Century mystic. Now those are names with class.

My wife’s cat, a little calico female we got at some smelly rescue place on East 4th Street already had a name, Kiwi. I told my wife to keep the name; after all, the cat before was called Banana, another fruit name. Not my cat anyway.

I like to write, take things apart and put them back together. Also our cat Snookie, turtles, and my lovely wife Danusia.
View all posts by xaviertrevino →
This entry was posted in Uncategorized and tagged angoras, cats, doorman, humor, pet names, pet sitting, relationships, siamese cats, Upper west side. Bookmark the permalink.

2 Responses to This One’s For The Kitties