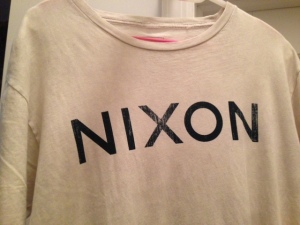 A couple of weeks ago I was on the J train on my way home from work late Saturday night, I get off of work at 11P.M.; and the train was filled with kids headed out to party in Williamsburg, or coming back from partying on the Lower East Side, take your pick.

I noticed a young man of indeterminate race (he could have been anything from Latino to Israeli to Serbian) accompanied by two pretty blonde girls in frilly frocks and combat boots. An old but tried style very popular on the East River Shuttle.

The boy, on the other hand, fashionably scruffy with a two-day growth of beard and a shock of thick black hair that hung in his face like Hitler’s hair at his most frenetic; had on jeans and a really fabulous shirt, a “Colossal” shirt, as Ratso Rizzo would have put it.

It was like a bowling shirt, short sleeved and box-cut with an open collar; but what made it special was that the body of the shirt was white and the sleeves and collar were black in contrast. Furthermore, the white part of the shirt had a print of a little skull and something else design, very cool. A thought occurred to me that occurs often enough I have to think about it; “I gotta have that shirt.”

Sometimes that thought comes over a pair of boots, pants, a hat (I’ve got a whole shelf in my closet devoted to goofy hats I thought would look really fly on me but don’t) a jacket or as in this case, a shirt.

I could have asked the kid, “Hey, where did you get that shirt?” But I didn’t me being me and never wanting to ask for help, I figured I could find it or at least something close to it, as the black and white contrast was more important to me than the little skull motif.

The next morning I Googled “contrast collar and sleeves short sleeve shirts”, and looked at Amazon, and on Google shopping itself, to no avail. The closest thing to it was the “Charlie Sheen” series of bowling shirts.

On Monday, my day off, I went off to Soho in search of the shirt, or something like it. I started in Bloomingdales on Broadway, and walked up to Houston Street looking in a variety of stores, to no avail. I gave up and went to Whole Foods for groceries.

One day a few years ago, I was with a few male friends, we’d gone to an event in the West Village, and as we walked to the subway we passed one of those “sample sales” and I said I’ll see you guys later, I’m going to see what they might have in here. One of the guys, a guy I’ll call Peter, suddenly said:

“Oh, you shop? I shop too. So does Richard, Richard shops.” Richard is a mutual friend, and I never was interested in whether Richard, or Peter, for that matter, “Shops.”

Today I gave it another try, I gotta have that shirt. I started at Bloomingdales again, but this time my strategy would be to take my time and look very carefully through all the racks. There were some nice summer shirts, very similar to what I want in cut and material, but all in some kind of print or another, no contrasting sleeves and collar.

I went to Yellow Rat Bastard across the street, no luck. I walked over to West Broadway, and remembered I’m not a millionaire. I made my way back to Broadway. I saw a pop-up store just north of Prince Street that looked promising, it was skateboard themed and this shirt fits the bill. Again, similar but not what I wanted. There were a couple of shirts that might have made a nice compromise, but the sales people, all kids in their 20’s, were unbearably pushy.

“You like that shirt? You’re like the hundredth person to touch that shirt today. Feels nice, don’t it?”

After agreeing the shirt felt nice, I left. I walked up to Houston, resigned to repeat my visit to Whole Foods. I passed another store called “Billabong”, an Australian themed skateboard and surf store. Again, pushy kids and not quite what I’m looking for shirts. Then I saw a tee shirt in a sort of cream color, with NIXON simply stenciled across the chest. It was cotton and soft, and it was only $20, less than the J. Crew tees I usually wear. I took it to the cashier and paid for it. At least I can wear it the next time I tell my “It Was Nixon” story at the Moth.

By the way, I didn’t misspell “Shopping”. My mother, who never quite mastered the English language, used to say it like that, so it’s an homage to her.

I like to write, take things apart and put them back together. Also our cat Snookie, turtles, and my lovely wife Danusia.
View all posts by xaviertrevino →
This entry was posted in Uncategorized and tagged Bowling shirts, humor, J train, LES/Williamsburg, obsession, shopping, Soho. Bookmark the permalink.