My 25 year old son emailed me last Monday to ask for my address, a sort of frantic, urgent “dad when you get a chance send me your address right away” and that was it. He did say he was OK in response to the last email I’d sent him a couple of weeks prior.

This is how we communicate, random emails that are few and far in-between. He has a phone that says: “the present subscriber does not accept incoming messages at this time.” Sometimes I’m lucky and he answers.

Javier lives in Omaha, Ne. Why Omaha, kid? A kid that was born in Beth Israel hospital on 17th Street, grew up in Greenpoint, Williamsburg, and Spanish Harlem ends up in Omaha, Ne. But he’s happy, and that’s what’s important.

So yesterday, on my way to work in the afternoon, I opened the mailbox and there it was, the envelope with the Omaha Ne. return address on it, my first father’s day card from him since he was 12. I still have one or two of those, “the best dad in the world” scrawled in his childish block letters, when my wife asked if I still wanted them I gave her a look that she said “never mind” to.

I love my son, and I know he loves me. We tell each other that each time we talk, and have always said so. My father, on the other hand, would only say so when he was very drunk, and that’s when I least wanted to hear it. We had a horrible relationship that I was able to salvage only in the last years of his life when he was in a nursing home. I always made sure to visit on his birthday and father’s day, and treated him with all the love and kindness I could muster. 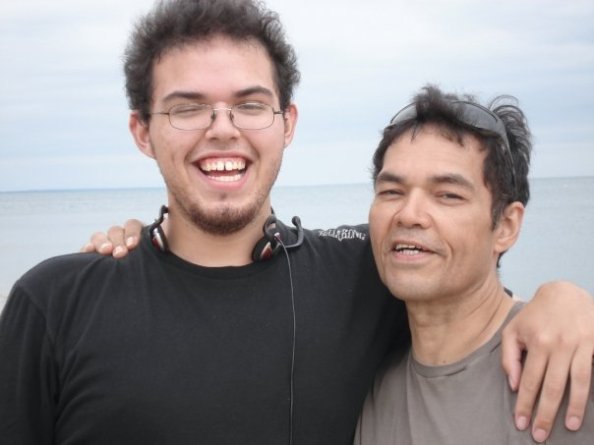 My son is six-foot one or two, and 220 pounds. A few years ago he came to stay with us in Brooklyn for a summer after he’d told me on the phone that things weren’t going well with him and his mom in Santa Fe, NM. I took to calling him “the giant boy” to my friends, who found that very entertaining. I called him this because even though he was 21 at the time and the aforementioned size, all he wanted to do was play video games and eat bags and bags of Doritos corn chips and drink gallons of soda, child-like endeavors if you ask me. His first day in Brooklyn he ran over to the local Food Bazaar for a pint of Ben and Jerry’s chocolate chip cookie dough and had it for breakfast. He claimed they didn’t carry that flavor in Santa Fe.

That summer I got him a job with my company and he was doing great at it until his grandfather died and then he suddenly quit. He told me he had a nervous breakdown, but I suspect he needed to play more WOW at times he was supposed to be at work. In September, after a month of lying on the couch and in his room playing WOW I bought him a ticket back to Santa Fe. I told him if he wasn’t going to work he was not going to live in my house. The day before he was supposed to leave, he asked if I could change the ticket to a later date. I asked why.

“Mom said she turned my room into a studio, and where am I going to stay?” He said with a panicked look in his face.

“That’s a good question, son, because you can’t stay here either. I got you a great job and you quit, and you haven’t made an effort to get another, and we agreed that if you didn’t you’d go back.” His panic-stricken face almost broke my heart, but I knew I had to get him to take care of himself.

“Look, you’ve got some money, I’ll give you some more. When you get off the plane in New Mexico get yourself a cheap motel room, and start calling all your friends to see if one of them needs a roommate. If all else fails, I’m sure they have homeless shelters in Santa Fe, probably nicer than the ones here.”

He went back, and that’s how he hooked up with the friend who owns the house in Omaha, Ne., where he lives now with a bunch of kids his age and works at a car wash. I keep telling him to see the movie “Car Wash.”

So it was great to get this card, to see my son learn how to take care of himself, to be a father. He was here last summer for a week to go to some comic book convention in New Jersey, and we talked about fatherhood.

“Yeah, son, I felt exactly the same way at your age. And yet here you are!”

I like to write, take things apart and put them back together. Also our cat Snookie, turtles, and my lovely wife Danusia.
View all posts by xaviertrevino →
This entry was posted in Uncategorized and tagged car wash, Father's Day, fatherhood, living, Love, relationships, roommates, world of warcraft. Bookmark the permalink.

3 Responses to The Father’s Day Card