We got to the park around 7, no reason to get there early and sit through “The Darkness”, who I’ve never heard of, or “The Flaming Lips”, who I’ve heard of but have no idea why I have.

We walked the half-mile or so through the park to get to the concert area, a big field fenced in for the occasion with the stage at one end and all sorts of food and beverage booths and portable toilets around the perimeter. There were even stand-up picnic tables set up near the food stands. How civilized.

We looked at the food and found nothing particularly appetizing; besides, we’d eaten before leaving the house. So armed with a bottle of water and a pack of gum we waded into the crowd to see how close we could get to the stage. We walked until we reached a metal crowd control fence. There were people beyond it, much closer to the stage. A separate V.I.P. area, I learned. Pay more, get closer.

But we were pretty close, 60 or so feet from the stage; close enough to see Karen O’s antics without having to strain our necks.

We watched the stage crew set up and waited, and waited. The same guitar tech kept putting the guitar on and playing with it over and over again, for almost the entire 45 minutes we waited. The crowd started pressing in again, as the kids that went off in search of refreshments after the Flaming Lips finished started to filter back.

I’ve been to tens of dozens of shows like this; I think the first outdoor show I saw was The MC5 and The Stooges in Flushing Meadows park in 1969. When I was 15. I didn’t even know who the MC5 were; I’d gone to see the Stooges on a friend’s recommendation. I remember thinking the Iggy guy was nuts when he dove off the stage into the audience, but it was a great show. I’ve seen The Stooges and Iggy Pop a few times since then, but nothing can match that first time.

As we stood there waiting, my legs and knees beginning to hurt, my lower back joining in, and feeling the press of exuberant young people noisily downing beers and blowing cigarette smoke in our direction I wondered what possessed me to spend $75 a ticket on Stub Hub to get elbowed in the ribs by drunk children. At least the MC5 and The Stooges was only three bucks. For three bucks I would stand on my head and like it.

It was finally dark enough and Nick Zinner and the drummer came out and took their places, along with a guy on bass. Zinner launched into a guitar riff that I could feel in my loins and Karen O bounded out onto the stage in a gold lamé pants and jacket topped off by an Egyptian looking head peace of the same material. She wore red hi-top Converses and started her signature yowling. For the second and third songs, a Gospel Choir complete with matching robes came out to lend a hand. The music was loud, visceral, exciting. It felt worth the wait.

Before they came on Danusia and I agreed that standing in the crowd wasn’t so much fun for middle-aged people like us, and we decided that after we saw a few songs to see what all the hub-bub was about we could get out of the crowd and listen to the music from a more comfortable place.

The crowd roared and a giant inflatable eye came out from the stage, bouncing over the audience. This was fun. I got out my iPhone and started taking pictures. When the novelty of the giant eyeball wore off I asked Danusia if she wanted to get out of the crowd, and she said yes. I took her hand and started to lead the way out. It was slow going at first; the crowd was so tightly packed. “Excuse me, excuse me, I murmured as I pushed my way through wave after wave of drunk kids. Strobe lights from the stage flickered on their faces, some of them expressing shock that anyone would want to leave in the middle of the show. I felt like the hero running into a crowd of zombies in one of those zombie movies, except these didn’t chase you, they just didn’t move out of the way.

In one of those well-lighted moments, I looked beyond the immediate faces to see how much further we had to push to get out of the crush, and was dismayed to be faced with a virtual sea of faces. A whole ocean of faces! We were going to be walking through this crowd forever.

Suddenly there was a break, I tripped on something and it turned out to be a picnic blanket. The crowd thinned out, and we walked through the gaps. We went to the bathroom and Danusia said she’d had enough. So had I.

We made our way back to the F train along with hundreds of others. The train was almost as packed as the concert. I listened to a young couple have a spat right behind my head.

“You don’t treat me the way you should!” The girl accused the boy. “That’s because you’re so goddamned normal and I’m not normal, OK?” The girl turned away from him, pointedly ignoring him, and started to sniffle. When I got home I discovered I’d lost my expensive Ralph Lauren wayfarer-style POLARIZED sunglasses, probably in the crush of the crowd on the way out. I vowed to Danusia that unless we were sitting at a nice table in a comfortable club, I was never going to a live concert again. 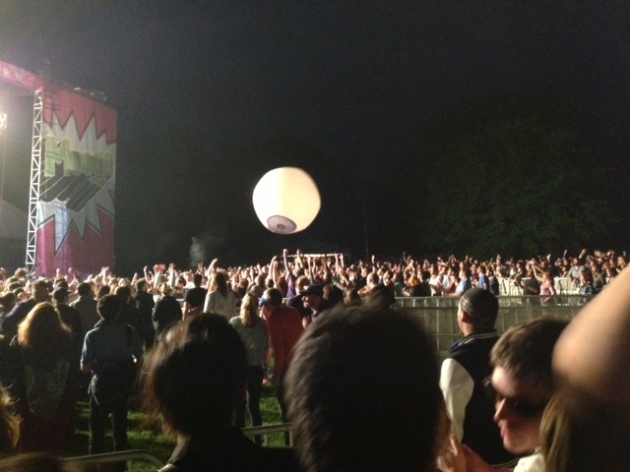 I like to write, take things apart and put them back together. Also our cat Snookie, turtles, and my lovely wife Danusia.
View all posts by xaviertrevino →
This entry was posted in Uncategorized and tagged concerts, discomfort, live shows, middle age, relationships, The Stooges, The Yeah Yeah Yeahs. Bookmark the permalink.