THE CALL OF THE CHEESE

Posted on September 5, 2016 by xaviertrevino

A couple of months ago I noticed my Friends Jenny and Ezra had lost some weight. Not that they were over weight, but age tends to thicken us up and Jenny and Ezra are no exception, to those of us of a certain age.
I am no exception either, and even though I can still squeeze into my last remaining piece of army uniform, a fatigue shirt, the operative word is squeeze…
It’s a constant struggle for me, but as one who once topped the scales at 287 pounds on a 5’9” frame I’m grateful not to break 200 pounds any day.
I did get down to 170 about 16 years ago, but that was what I called “the divorce diet,” which meant I’d lost my appetite (at least for a while) and simply stopped eating.
But things got better and I worked at dealing with my emotions and gradually the weight has crept back up. About four years ago I went up to 207 pounds and started to panic. My pants did not fit and I was on the verge of going back up a size.
I cut out my favorite snack, peanut butter and raisins. I cut back on the second favorite, hummus and Xochil corn chips, which I had every day when I got home from work. I started exercising vigorously again, well as vigorous as a 58 year old can get, and I got to 189. My goal was 180, because 170 was just plain undoable unless I stopped eating altogether yet again.
So for the last four years I go from 190 to 195 and back, much to my frustration.
When I saw Jenny and Ezra and their probably 10 pound weight loss, I asked how they did it.
“We cut out the dairy. No cheese, no milk.”
I put half and half in my coffee every morning, but that’s like a few drops (I like my coffee dark) less than an ounce a day. I use 2% milk in my cereal that I have for breakfast every morning, so that’s not a big deal.
The big deal is CHEESE.

I love cheese; I can just sit back and munch on an 8 oz. bar of sharp cheddar any minute of the day, especially in front of the TV.
Then of course there’s gouda, mozzarella with basil and tomatoes, pepper jack on a refried bean sandwich, (I make the best refries…) red Leicester on anything, cheeseburgers, you get the idea.
Speaking of cheeseburgers, after that weigh in four years ago and after a co-worker referred to me as “chubby,” I stopped having meat with every meal.
Sometimes I don’t have any meat at all. (Including fish.)
That helped, I noticed a difference right away.
But the cheese remained the same.
I also started this thing four years ago of drinking hot apple cider vinegar (diluted of course) every morning. Eating raw sauerkraut. Cutting out gluten.
The hot apple vinegar was too much of a pain in the ass, so I cut that out. But I love raw, unpasteurized sauerkraut. I eat it with a fork out of its container sometimes. The gluten is a tough one, bread comes into our lives in varying degrees from time to time.
Being in the hospital a couple of weeks ago was an interesting experience, I’m getting the guts up to write about that- I’m going to have to call it “Not For The Squeamish” or something like that, brought forth a few facts about the state of my health.
I was diabetic those many years ago when I topped the scales at 287; at one point my blood sugar was 600. The doctor said he had no idea how I was walking around.
Two Tuesdays ago, while I lay in the hospital bed waiting for the doctor to remove my catheter a nurse came in to measure my blood sugar. It was 87.
“87! That’s too low,” she declared. She left the room and came back with a small carton of orange juice.
“Drink this,” she said.
Once, during that summer of 2000 when I stopped eating I measured my blood sugar and it was 50. No wonder I felt dizzy.
My blood pressure was low as well. Normally my BP is 110/70, and that’s low for a 62-year-old man. A friend who is a nurse once took my BP for fun and said I had the blood pressure of a 19-year old. That was heartening.
So even though my prostate is enlarged and I weigh more than I’d like, I’m in pretty good health. So I’m grateful for that.
I told Danusia about Jenny and Ezra and the cheese, and I’ll have to say Danusia loves her cheese too. But she’s game to give it a try.
We went to Maine last week, and our Hosts, the Lovely Charlene and her husband John don’t eat meat, so that was taken care of. There was haddock and lobster though. And cheese, though not necessarily together.
The cheese was in the eggs we had for breakfast, so we cheated on the cheese restriction. It was wonderful.

And speaking of gluten, one cannot go to Maine and not enjoy an apple cider doughnut. 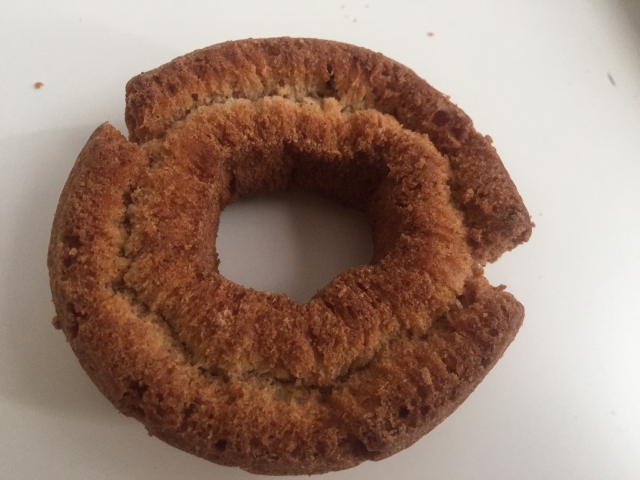 It takes work not to let myself go, and sometimes I resent it.
I resent it when I feel the pain of doing crunches and push-ups in the morning. I resent it when a wonderful piece of cheese is on sale at Whole Foods.
I was in Whole Foods the other day when they put out free samples of their “in-house” pizza.
That was wonderful too.
I guess it’s all about moderation, and moderation is not an easy thing to stick to.
But I’ll keep trying, and I’ll stick to the occasional free sample to satisfy my cheese craving.