View of Weehauken at night.

Last Friday I went to an “open studio” event at a friend’s studio in Westbeth. I went with some old friends, and we met for dinner before hand at a burger joint on 9th Avenue called “Bill’s Drinks and Burgers. It was a loud, crowded little place on the corner of 9th and 13th streets.
After we ate we walked over to Washington Street and down to Westbeth, going up one elevator to the 6th floor and then across a long corridor to another elevator to get to Robert’s studio on the 8th floor. Complicated, ain’t it?
I met Robert and my friend Vicki who’d invited me to the dinner and open house when we were all students at the Cooper Union Saturday art program. Cooper Union invited talented High School students from all over the city to take classes at Cooper taught by actual Cooper Union students, who where adults to us then.
But this isn’t about that; this is about the meatpacking district.

The old Hellfire Club was here.

As I made my way to 22 9th Avenue and Bill’s Burgers I passed by a place called HILO now, and I remember when it was called The Hellfire Club in the ‘80s. In the ‘80’s the Hellfire club was about the only nightspot there, if you want to call it a nightspot. It was more of an S&M bar where the owners (or someone hired by the owners) put on some pretty tame S&M shows, I remember one where a very pretty girl in a leather-strappy sort of thing was spread-eagled on a big black painted wooden X getting whipped by some beefy bearded guy in a leather hood.
It was a show, a performance, and I don’t think the guy was really hurting her.
I went only because a friend of mine insisted I go with him, he offered to pay my way in and buy drinks. I never said no to free drinks at the time, so I said OK.
It was entertaining, most of the patrons were in their best latex and leather and the girl’s outfits were pretty skimpy. Then my friend, whose name I won’t mention for obvious reasons, disappeared for a little while. I wondered where he went, he was gone a little too long for it to be a bathroom trip, so I went looking for him and discovered that there were private booths in the back of the club. I went back to our table and nursed my beer till he got back. I didn’t ask him what he’d done.
While he was gone a girl in a latex outfit came up to me with a big paddle in her hand.
“Would you like to go up and get paddled? Only $25.” People were going up on the little stage and getting paddled by these girls.
“I don’t think so. But if you like I’ll paddle you for free.” She declined my offer and moved on to the next patron.
Back then you only went to the meatpacking district at night if you were looking for a transvestite prostitute, or to go to the Hellfire, of course.
Friday night I encountered a whole different scene. 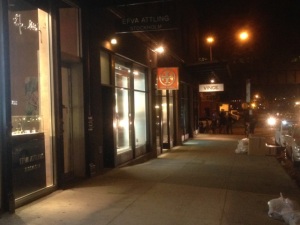 I can’t even pronounce that.

Little West 12th Street was lined with stores filled with clothing I can never hope to afford, and ditto the restaurants. I was barely able to spring for the burger ($9.95 for just a burger, fires were $5.95 extra) with a side of water.
After I left Westbeth by myself, I walked back to the A train and passed all these stores anew, and took the accompanying pictures. By the way, the photo at the very top is a view of Weehauken from Robert’s window. Nice view, huh? 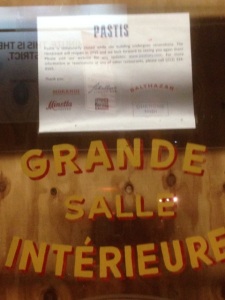 I passed by the now closed Pastis, and I did eat there once, but only because my friend Linda was waitressing there and insisted I drop by. I had coffee and some kind of pastry and didn’t have to tip her. I didn’t see anyone famous.
I did eat at a place on Hudson Street once and sat next to Steven Van Zant and his wife, who was also on The Sopranos.
But Friday there were no famous people, just rich kids in expensive clothing staggering around and looking fabulous. I wished a gang of transvestite prostitutes would come running down the street to run over these privileged self-indulgent brats. They’d never know what hit them.

Near 14th Street there was some huge makeup store open, I guess the fabulous need access to makeup on a 24-7 basis since it was past 9PM.
Some of the gleaming new buildings are very impressive; the neighborhood no longer has that smell of fresh-spilt blood and rotting meat premating it. There are no longer roving bands of kids looking to rip off the Transvestites or groups of gay men looking to break into parked trucks. All in all, it’s a pretty sterile scene today.
I think I liked it better back then, seemed a little more based on reality.